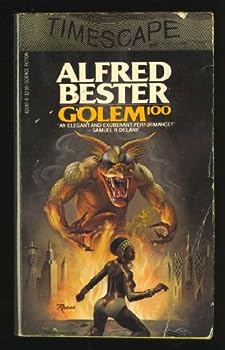 This description may be from another edition of this product. Regina and her bee-ladies, bored members of the elite, while away the idle hours by playing at conjuring the Devil - a game which leads to horrifying consequences. Alfred Bester's other novels include...

Published by Thriftbooks.com User , 16 years ago
This old book doesn't quite have the immortal greatness of Bester's two masterpieces, The Stars My Destination and The Demolished Man. Those two classics deserve to be rediscovered due to their sheer relentless weirdness and Bester's very strange and vivid imagination. After one has digested those two novels, Golem^100 becomes a little easier to handle, though that weirdness is still there in spades. This one does have Bester's most fully-realized and well-crafted characters, as these unique personalities try to battle an interdimensional demon by trying to travel to its world, through the use of weird drugs and esoteric rituals. Bester does incredible things with human (and inhuman) psychology here, as mind expansion starts to cross the lines between psychic realms and even between good and evil. The illustrated portions of the novel, highlighting trips to these dark realms, could be better artistically, but this is a very audacious method of visual storytelling. Note that this book does have some scenes of horrendous brutality and degradation that could be a turn-off for some readers, and a few sections written in stream-of-consciousness or hipster slang are getting pretty dated. But this is another case of Bester's truly cracked and bizarre imagination, and his very small number of novels places him far above sci-fi writers who have written dozens and dozens. But sometimes you really have to wonder what this guy was on... [~doomsdayer520~]

Good, but too stylistic for the sake of it..

Published by Thriftbooks.com User , 19 years ago
With too much time on their hands, a group of well to do ladies conspire to summon the devil. This they unknowingly do, unleashing a chain of unlikely and gruesome murders. During the outbreak of the murders the perfume designer, Blaise Shima, who has an extraordinary sensitivity to odours, is drawn in by way of the strong smell of death that is coincidental with the creature / Golem that the ladies have set loose. Police investigator, Subador Ind'dni is baffled by the killings but learns the truth when he is eventually confronted by the strange goings on between Blaise Shima and the Psychodynamicist, Gretchen Nunn, who has been employed by Blaise Shima's employers to discover why their top perfume designer is acting oddly.Attempts to destroy the Golem appear to have succeded, but Gretchen Nunn is ultimately a replacement to the ladies that instigated the problem, and Subador Indin'dni becomes the Golem.Much of this book is very similar to Iain M Banks' material, a couple of sections pretty much a precursor to sections of Use of Weapons and Against a Dark Background. The opening chapter is similar to John Updike's, The Witches of Eastwick. Overall, Golem 100 was a straightforward read apart from a few parts toward the final pages, which were a bit tiresome and which can be skimmed through. A section in which a number of murders were taking place was awkwardly handled: the break from Suabador Indin'dni to a sequence of murders and back again, taking a page or two to figure out what the intended effect was supposed to be, since it was a stylistic divergence from the preceding text. All of the illustrations worked okay, but were sometimes a little confusing because they were either post or pre sync to the text.In general, Golem 100 is a well put together piece of work all the links well thought through and convincing. The satirical aspect of the book was - I'm afraid to say - dependant upon events that I've forgotten the relevance of, making this aspect of the book little more than slightly comedic. Doubtless there are others, who will be better informed than myself, and more appreciative of Alfred Bester's intentions...

Dark, twisted foray into the world of the subconcious

Published by Thriftbooks.com User , 20 years ago
This book represents all of Bester's trademarks - psychology. twisted humor, fast action, eccentric characters - taken to the extreme. The book is about a group of bored rich houswifes who dabble in magic to avert tedium and manage, without their knowing, to actually summon a demon. A small group of misfits - BLaise Shima, a scent expert, Gretchen Nunn, a detective, and Inspector Ind'dni, hunt for the source of the Demon who terrorizes the city.The Science in this science fiction book is psychology, mainly Jungian psychoanalysis. In this book the world of the collective subconcious comes to life. The world in Golem^100 is the sort of demented corporate-run future described in Bester's earlier work, The Computer Connection. Here it's described in even darker tones.There's a lot of dark humor in Golem^100, and some of it may not be to everyone's liking - if you're offended by necrophilia jokes don't read this book. If you can stomach some VERY graphic violence (with innards all over the place), twisted humor and a plot that involves mutants, demons and radioactive drugs, read this book. While not a masterwork, it's a very original, inventive, thrilling read.
Copyright © 2020 Thriftbooks.com Terms of Use | Privacy Policy | Do Not Sell My Personal Information | Accessibility Statement
ThriftBooks® and the ThriftBooks® logo are registered trademarks of Thrift Books Global, LLC