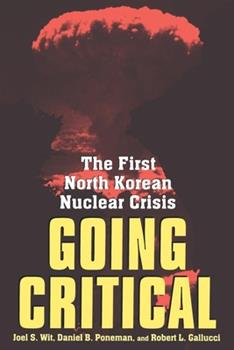 A decade before being proclaimed part of the "axis of evil," North Korea raised alarms in Washington, Seoul, and Tokyo as the pace of its clandestine nuclear weapons program mounted. When confronted by evidence of its deception in 1993, Pyongyang abruptly announced its intention to become the first nation ever to withdraw from the Nuclear Non-Proliferation Treaty, defying its earlier commitments to submit its nuclear activities to full international...

An Excellent Review of US Negotiations with North Korea

Published by Thriftbooks.com User , 15 years ago
I picked "Going Critical" because of our current state of affairs and our own internal debate as tto how to effectively deal with North Korea. Their are many issues and items the book highlights, most importantly being how enigmatic, unpredictable and paranoid North Korea was during the 1990's. I suspect that the level of paranoia has only increased in light of the current US position toward the regime of Kim Jong Il. It is striking how many nations, in particular Japan and s. Korea, most European nations, and to a lesser extent China and Russia are inclined to keep North Korea in a box, without Nuclear Weapons. The issue is the delicate balance of preventing Pyongyang from going nuclear without making them move their million man army across the 38th. If you are into the inside baseball of diplomatic neotiations, this is certainly a book for you.

Their hard-hitting analysis of the current crisis in Korea

Published by Thriftbooks.com User , 17 years ago
Is a second Korean War looming on the horizon? Most likely, unless North Korea can be deterred from its ongoing campaigns, say Joel S. Wit, Daniel Poneman and Robert Gallucci in Going Critical. Their hard-hitting analysis of the current crisis in Korea includes a studied history of diplomatic and political events of the past, exploring the challenges of hard negotiations with North Korea to date. From cabinet meetings in Washington to Geneva talks and North Korean associations with China, Going Critical is a 'must' for any who would understand the latest issues and their ongoing implications for a nuclear crisis.

Lessons for the present and future

Published by Thriftbooks.com User , 18 years ago
The three authors of Going Critical were important members of the U.S. team that negotiated the Agreed Framework with North Korea in 1993-94. Rather than considering the accord a failure because the DPRK ultimately undertook a secret uranium enrichment project, the authors argue persuasively that their handiwork postponed North Korean production of plutonium for eight years - from 1994 to 2002 - at relatively low cost to the U.S. and the international community. The most important aspect of the book is not argument, however, but information. The authors give us a detailed, play-by-play account of U.S. decisions and actions in the negotiations with North Korea, going well beyond anything previously available. I wrote my own account of the DPRK nuclear program and the Agreed Framework negotiations in 63 pages in my book, The Two Koreas: A Contemporary History. Authors Wit, Poneman and Gallucci devote 408 pages to these developments, including a good deal of inside information that was previously unavailable. Outsiders, including historians, can continue to debate whether the U.S. negotiating team should have made the compromises it did in order to reach an agreement with North Korea. Now, at least, they can have some solid facts to undergird their opinions. This is a major contribution to contemporary history. Beyond this, the final chapter includes lessons learned, as the authors apply them, for present and future dealings with North Korea regarding its dangerous and destabilizing nuclear weapons programs.
Trustpilot
Copyright © 2022 Thriftbooks.com Terms of Use | Privacy Policy | Do Not Sell My Personal Information | Accessibility Statement
ThriftBooks® and the ThriftBooks® logo are registered trademarks of Thrift Books Global, LLC