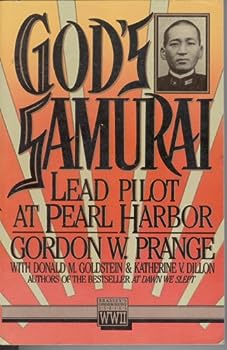 (Part of the The Warriors Series)

This is the story of Mitsuo Fuchida, the career naval aviator - and, later, internationally known Christian evangelist - who not only led the air attack on Pearl Harbour, but participated in most of the fiercest battles of the Pacific. As well as a record of historical events, it is the personal story of a man swept along by his times.

Published by Thriftbooks.com User , 18 years ago
Excellent detailed story of Pearl Harbor's lead Navy pilot who through special circumstances wrought only by God found himself after the war travelling in the USA with Billy Graham and preaching the Gospel in Christian Crusades.

Reconciliation in the midst of Clash of Civilizations

Published by Thriftbooks.com User , 20 years ago
An awesome true story. Definitely one of the three best books I've read in the past decade. In a time like this of Osama bin Labens and shocking inter-civilizational conflict, Fuchida's life story shows how true reconciliation and inter-cultural brotherhood can be experienced. It gives hope in spite of the huge obstacles to inter-cultural understanding. A powerful human interest story. Don't miss it!

Published by Thriftbooks.com User , 21 years ago
A friend of mine introduced me to this book in April of this year. He told me it was unlike any book about the Pacific war that he had ever read. Although skeptical at first, I sill went ahead and purchased the book. I left it on my book-shelve for several months and forgot all about it. As I began packing up in July to move I noticed this book again, so I picked it up and began reading it. I found the style of writing extremely fluid, and the chapters were concise. This well balanced account of Mitsuo Fuchida life traces it from his days as an Imperial naval aviator to Christian evangelist. 'God's Samurai' is a truly inspirational book filled with numerous accounts of honor, bravery, loyalty, and sacrifice - all the codes of a Samurai warrior. I have enjoyed this book tremendously, and I have just begun reading, 'Midway: The Battle That Doomed Japan: The Japanese Navy's Story' by Mitsuo Fuchida, Roger Pineau (Editor),Masatake Okumiya(Contributor). Both 'God's Samurai' and 'Midway' are 'must-have' books for anyone who is truly interested in the Pacific war and naval battles!

Another home run by the Superlative Prang team!

Published by Thriftbooks.com User , 23 years ago
I'm an avid military historian, my specialty is WWII Pacific theater - Pearl Habor is my favorite reading area. I read Prang's books because he and his team produce the best written books on that era on the market today. (Possibly even the best written military histories of any era!) Prang has such a unique historical perspective - he was there so through him we actually hear the real voices of the people of that era. Beyond that extraordinary first hand experience, this book is as heavily researched and referenced as any I've found. While it provides remarkable historical perspective, there is a theme that would be compelling for even the non-historian. This is the story of Mitsuo Fuchida who lead the mission to attack Pearl Harbor. This is a man who had committed his life to his Emperor and Japan's goals. The book traces a profound, almost mind-boggling evolution in this man's life from Japanese warrior to a Christian missionary spending time in the United S! tates! Prang et al breath life into history and provide something for more than just us in the narrow audience of military historians.

A truly outstanding and interesting book!

Published by Thriftbooks.com User , 23 years ago
This is one of the most enojyable books I have read to date! As an avid reader, and historian, it was refreashing to take a look into the life of one of WW II's leaders. What touched me most was the impact that Christianity had on Mitsuo Fuchida. The ability of Christianity to reach across cultures and languages to transform the life of one of Japan's foremost heros impressed me considerably! I also enjoyed reading about Fuchida's experiences in WW II - especially his role in hte planning/executing of the attack on Pearl Harbor and his impressions of the devastation created by the A-Bomb. I highly recommend this book! It is very fast paced - sure to keep your interest. A must buy
Copyright © 2020 Thriftbooks.com Terms of Use | Privacy Policy | Do Not Sell My Personal Information | Accessibility Statement
ThriftBooks® and the ThriftBooks® logo are registered trademarks of Thrift Books Global, LLC