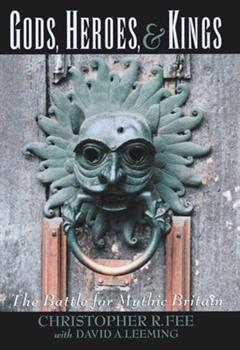 Gods, Heroes, and Kings: The Battle for Mythic Britain

The islands of Britain have been a crossroads of gods, heroes, and kings-those of flesh as well as those of myth-for thousands of years. Successive waves of invasion brought distinctive legends, rites, and beliefs. The ancient Celts displaced earlier indigenous peoples, only to find themselves displaced in turn by the Romans, who then abandoned the islands to Germanic tribes, a people themselves nearly overcome in time by an influx of Scandinavians...

Published by Thriftbooks.com User , 14 years ago
Extremely fascinating text! It is no surprise Oxford University Press chose to publish this work. Whether the reader is a scholar specializing in the folklore of the British Isles, a student enrolled in a Viking seminar, or an individual with an interest in the topic, this work is informative and captivating. The text not only aids the reader in his or her study of British Isle folklore, but allows the reader to draw connections between Scandinavian culture on the mainland and other isles. I have read a fair amount of works concerning this topic, but none have kept me as interested as "Gods, Heroes, & Kings." A definite buy!

A Fascinating Look at the Mythology of the British Isles

Published by Thriftbooks.com User , 17 years ago
Gods, Heroes, and Kings: The Battle for Mythic Britain Gods, Heroes, and Kings, written by Christopher R. Fee and David A. Leeming and published in 2001 by Oxford University Press is a fine overall introduction to the mythologies of the pre-Christian inhabitants of the British Isles, who can be divided into two groups, each of which, in turn, has two subdivisions. First came the Celts, both Goidelic (Ireland, Scotland and the Isle of Man) and Brythonic (Wales, Cornwall and the French region of Brittany). Most of the mythology of the Celts was written down long after the coming of Christianity to Ireland and Wales. Many Deities appear in both literatures, but the precise relationship between the religions of the two main branches of the Celts is not completely clear. Long afterward came the arrival of the Anglo-Saxons, a loose assemblage of Germanic tribes who became the English and transformed most of the island of Great Britain into England (Angle-Land). These newcomers wrote down little of their mythology, but a fair amount of it can be reconstructed by comparing off-hand references in works such as Beowulf with the much more extant mythology of Scandinavia, many of whose inhabitants raided and later settled in the British Isles during the Viking Era. While closely related, certainly more so than the religions of the Goidelic and Brythonic Celts, the precise relationship between the Troth of the Heathen Anglo-Saxons and that of the Viking-Age Scandinavians, as well as the relationship between both of them and the pre-Christian beliefs of the Continental Germanic peoples (German, Dutch, and Frisian speakers) will probably always remain a bone of scholarly contention. Despite being a work of more recent scholarship, Gods, Heroes, and Kings reflects in many ways the scholarship of the 1970's and 1980's, with considerable influence from the work of the late Joseph Campbell, author of the book The Hero with a Thousand Faces and the Masks of God series. The prominent influence of this scholar rather surprised me, as his ideas seem to be at the present time somewhat out of favor. However, just as in mythology and in clothing fashions, the popularity of ideas and theories in Academia can also have a cyclical element. The writing style is very readable, and the combination of a section retelling a myth with a section commenting on it is both effective and enjoyable to read. The main idea of this book is that the battle for mythic Britain was not "a struggle between factions of ancient gods and heroes, but rather a war of attrition, a continual reformulation and assertion of age-old archetypes in the garb most appropriate for the audience who heard their stories" (p. 192). Many of the mythic themes survived Christianization amazingly intact, and contributed to the uniqueness of the Christianity of the British Isles. Much attention is given to heroic themes, and the authors hold that the mythic Hero is actually Every

Published by Thriftbooks.com User , 19 years ago
Drs. Christopher Fee and David Leeming have crafted an extraordinary work examining the marriage of Celtic, Germanic, and Norse cultures and religious beliefs in Britain (particularly as they are seen via the literary traditions that chronicled them) in an effort to understand how the impact of pre-Christian peoples influenced the unique Christianity of Medieval Britain. While Dr. Leeming has provided extensive retellings of pagan myths, Dr. Fee has written insightful analyses of these myths and their import to the creation of a British religious ideology. Beginning with a scrutiny of the various pagan pantheons, the work then moves through detailed examinations of, among other things, types of deities, heroes and heroines, and the different sagas of the individual cultures. As an apocalypticist, I found the retellings and subsequent commentaries on Ragnarok and the Anglo-Saxon Fire of Judgment immensely informative and useful. This is an extraordinarily accessible book. It is intended for the non-specialist and, as such, would be perfect for an undergraduate survey course, for an upper-level topical course on British mythology/religion, or for any scholar seeking an understanding of Britain's pre-Christian culture. I would also recommend it highly as a handbook for any medievalist who needs quick and informed accounts of any and all of these topics. Not only have Drs. Fee and Leeming eloquently opened up the field of pagan Britain to further inquiry and discussion, but they have done so in a work that is, above all, easy and enjoyable to read.

Published by Thriftbooks.com User , 20 years ago
This book is a great read. It's obviously well-researched, and filled with intriguing facts. Furthermore, Fee has a writing style that draws the reader in and keeps him/her interested throughout. Highly recommended!

Published by Thriftbooks.com User , 20 years ago
really intersting read with lots of interesting facts, not for the faint hearted, makes you think and relise alot of different things
Copyright © 2022 Thriftbooks.com Terms of Use | Privacy Policy | Do Not Sell My Personal Information | Accessibility Statement
ThriftBooks® and the ThriftBooks® logo are registered trademarks of Thrift Books Global, LLC