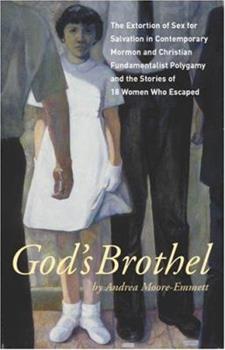 God's Brothel: The Extortion of Sex for Salvation in Contemporary Mormon and Christian Fundamentalist Polygamy and the Stories of 18

A shocking indictment of polygamy, this book reveals gruesome facts about Bible-based polygamy through the experiences of 18 brave women who escaped from ten of the 11 main polygamous groups. (Christian)

Published by Thriftbooks.com User , 15 years ago
I was very impressed with the research into the various groups who practice Pologmy worldwide. This book has a map showing where these groups are thoughout the USA, and if they are Christian, Muslim or Fundamentalist Morman. She does explain that the Modern LDS church DOES NOT condone Pologamy, and explains why some groups continue to believe that this is the only way to heaven. The first part of this book is a history of Pologamy, and gives a summary of many groups and how and why they got started. She makes it very clear that this is not just a "Morman" occurance, but rather widely practiced in many religions. The second part contains 18 stories of women and girls from various groups who have chosen to withdrawal from this lifestyle, and have begun to speak out what their experience were, and how it affected them and their families. It is an eye-opening group of stories, allowing the reader inside the walls of the groups. The people who become involved in these groups come to a believe that this lifestyle will be an escape from the stressful way the modern American lives. It appears to be a close knit family, pulling their money together, avoiding outside stressors, and living a Godly life in order to obtain lasting life in the hear-after. Perhaps there are many groups who do practice the above: however, what this book tells is the stories where the system has gone corrupt, forcing girls as young as 12 into marriages, demanding they have a child a year, discarding males, and using the public welfare system to support the children. Education is withheld, and attempting to leave the groups can become a deadly game for the women and children. I recommend this book for anyone interested in studying this lifestyle because it tells stories of all religious pologmany groups, and you hear the actual stories of 18

Published by Thriftbooks.com User , 16 years ago
This expose is badly needed. I am not a Mormon, but I do know that the original believers advocated polygamy and later on the mainstream LDS church repudiated it. Since I don't have a thorough knowledge of Mormon doctrine so I'll not attempt to do a critique on it here. But I do know that the kind of polygamy shown in this book is ghastly. That's the only way I can describe it. 1. First of all, the young age of these brides is unbelievable. Twelve, thirteen, fourteen years old. I believe that no matter what the culture, a person needs to mature emotionally and physically before marriage. 2. The refusal of many of these men to support their wives and children, making them dependent on the welfare system. This is just plain unbiblical. Even in the early cases of polygamous marriages in the Old Testament, the Patriarchs kept their wives and families fed and cared for. 3. The spousal beatings. If these people claim to believe the Bible along with their Mormon doctrines, they will have to realize that there is not one command given to men (in either the Old or New Testaments)that they can beat their wives. In one of the examples given in Moore-Emmet's book, a man hit his wife so hard that he broke her eardrum. Religion or no religion, there's one word for an act like that -- it's a CRIME! And it needs to be prosecuted as one. (By the way, the man I just mentioned was prosecuted later on.) 4. Although this book mostly concentrated on the plight of the girls, it also showed that young boys can be victimized, too -- that sometimes they are considered threats to the older men who want the young wives. 5. The slowness of the city and state governments to do anything about it. When the whole state is majority Mormon, I can understand the uneasiness about prosecuting polygamy in general, although I think it needs to be done. But how about outright abuse that is against the law? Or, for those who think they are above the law of the United States, how about against the Bible itself? I think polygamy is set up for problems, and I'm not just saying this because I'm female. History is full of family squabbles over the children of one mother ganging up on their half-brothers and sisters who are descended from a different mother. It can breed a lot of jealousy and resentment because many men will have their favorite wives and neglect the others. It's a thorny problem that won't go away soon. But thanks to this and other books like it, our attention can be guided to the problem and some time in the future we can find a solution. We must never forget about it.

Published by Thriftbooks.com User , 18 years ago
Andrea Moore Emmett opens our eyes to a horror that most of us assumed did not exist in modern-day America. How wrong we were. Through heart-wrenching tales told by the women who lived them we learn of a dark, dismal world in which girls are nothing more then human cattle. This is a must read for any one who doubts the existence of polygamy in the Land of the Free. This is an especially important read in light of the current threats to all women's rights.

I thought my eyes were open

Published by Thriftbooks.com User , 18 years ago
to what horrors do go on in polygamous communities. I've read a lot about it and living in Utah and having been raised in the mormon community, I figured I had a good feel for what might go on behind the walls of these compounds and homes. The stories in this book describe pretty much every perversion and abuse I might have guessed could occur in such an environment. All it takes is an understanding of patriarchal cult/religion and power combined with human nature to figure that what these women describe makes sense. I learned a little bit more about the state of Utah and how far it is from bringing justice and support where it is most needed. With the prevailing mainstream mormon influence within the power structures of this state, it seems they are still in the business of protecting their own polygamous doctrine and history first and foremost. So far, the most revealing book I've read on polygamy. Others that I've read have left me feeling that there was much untold.

Chilling Expose on Sexual Slavery in the Name of God

Published by Thriftbooks.com User , 18 years ago
Anyone who believes polygamy and slavery are sins of other cultures or times, will find this disturbing collection of true stories about contemporary American women who have escaped from polygamous marriages both shocking and a call to action. Readers learn about girls who are "bred" to become young brides of their own male relatives or of their father's close friends, of women denied education, freedom, and even the use of money, and of local government officials complicit in keeping the women and girls enslaved, even physically beaten. Most chilling to me is the patriarchy's justification for polygamy, rooted primarily in the Church of Jesus Christ of Latter-day Saints' (Mormon) history and doctrine. Although polygamy was officially outlawed by the Church in the late 1800s via a revelation (that many fundamentalists believe was politically motivated so Utah would attain statehood), the practice flourishes in growing enclaves in Utah and surrounding areas. This powerful expose shows how the huge families of sister-wives and children drain welfare funds in order to survive and typically live in poverty while the patriarch enjoys his sexual, monetary, and religious status. It also tells of a group called TAPESTRY that is dedicated to helping the women and children escape from the religious and sexual domination of these men. My feelings while reading this book included anger and disbelief, shock and sorrow, a voyeuristic horror, and finally pride in the women brave enough to tell their stories to the author so that the sexual predators could be "outed" and their victims, especially the young girls, offered hope of escaping the horror of this slavery. Polygamy in God's name is certainly NOT "sex between consenting adults" when young girls are treated as wombs and chattel, and given no choice in who or when they wed. By giving a voice to the brave sister-wives, and creating an underground railroad route for others to escape, "God's Brothel," the author and other members of TAPESTRY may be the Harriet Tubmans of our time.
Trustpilot
Copyright © 2022 Thriftbooks.com Terms of Use | Privacy Policy | Do Not Sell My Personal Information | Cookie Preferences | Accessibility Statement
ThriftBooks® and the ThriftBooks® logo are registered trademarks of Thrift Books Global, LLC