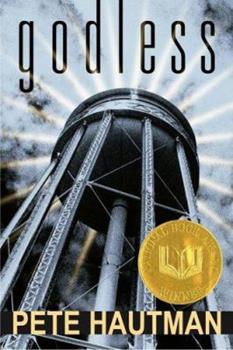 "Why mess around with Catholicism when you can have your own customized religion?" Fed up with his parents' boring old religion, agnostic-going-on-atheist Jason Bock invents a new god -- the town's water tower. He recruits an unlikely group of worshippers: his snail-farming best friend, Shin, cute-as-a-button (whatever that means) Magda Price, and the violent and unpredictable Henry Stagg. As their religion grows, it takes on a life of its own. While...

It's just a religion. Right?

Published by Thriftbooks.com User , 14 years ago
15-year-old Jason Bock and his friend Peter Stephen Schinner (AKA Shin) are scrounging around the town's water tower when Henry Stagg shows up with his fists and an attitude. That single event, combined with Jason's antagonism toward his parents Catholic religion, leads Jason and Shin to create their own religion. The Ten-Legged One watches over the town, pumping life through the piped veins of the city, so why not worship the life giver? Why mess around with Catholicism when you can have your own customized religion? All you need is a disciple or two. And a god. Cleverly dispersed throughout the opening pages of the chapters, the myth of The Ocean and the secrets of their religion grow and mutate. Chutengodianism is born and spreads. Friends join. Sides are drawn. The water tower becomes the focus of their lives, the center of their adventures, the bane of their existence. Resonating with the spirit of great works like Orwell's ANIMAL FARM, Hautman's ludicrous tale raises important questions about religion. Who or what defines religion? Is religion a good thing? And what happens when religion is taken too far? After all, people shouldn't make such a big deal out of it. It's just a religion. Right? -- Reviewed by Jonathan Stephens

A great read by Henry from Richmond

Published by Thriftbooks.com User , 14 years ago
Godless was a great book about a boy named Jason Bock and his summer vacation he spent with his friends. In the first chapter of the book you come on to three characters: the main character Jason but also his best friend Shin (Peter Stephen Schinner). Henry is a boy who likes to always make trouble, he is the kid that there always is in a story that grew up in a bad environment and loves to pick fights. But shin on the other hand is totally different, he is very quiet and shy, and when ever he gets mad or embarrassed he does what the author explained as "going into his shell" and wouldn't talk or anything. In the first scene of the book you find three of the biggest characters in the biggest seen in the books, but for now Jason and shin are searching for snails in this place under the water tower. When henry comes around and punches Jason in the gut. This book is strongly based on Jason and his religion and how he takes it to a whole new level. But it starts out about his Christian religion and how he doesn't believe in god, so he makes up his own beliefs and even his own religion known as "the Chutengodians" and worship the water tower in the center of the town known as " the ten legged one". His two other friends in the book are cute as a button Magda Price and Dan Grant that normal nothing-special friend that every one has. But as this religion gets bigger so does the danger. Especially at the first meeting when they plan to climb to the top of the tower.

A Great Book for Pre-Teens who Question Religion

Published by Thriftbooks.com User , 15 years ago
I loved this book. Simply loved it. Everyone had such a personality. I never expected Henry to be so nice to Jason when Jason was at Henry's house. Shin, I never thought he would get so mad at Jason for letting Henry join. I knew he would be mad, but not that mad. Another surprise was when Henry hit Jason, giving him a concussion at the end of the book. I would recommend this to anyone of the ages 12, 13, and 14, but not younger because of the language. That's another reason why I loved it, because it was directed to my age level, so I could understand the situations.

Published by Thriftbooks.com User , 16 years ago
In a brilliantly authored book for young adults, Schmidt introduces a basic American Concept. Freedom of religion! The right is protected, but for one young man it is not being honored. As an atheist, the protagonist holds the view that all religion was "all made up." So, he decides to invent his own. It does not matter that the object of their religious fervor is a water tower. It is specifically chosen because it is so unGodlike. Yet, the story develops as all religious stories develop; with a concept, and a following. Jason does build a small following for his religion, yet it gets him virtually nothing but trouble. Yet he insists on going forward, despite the pressure from those who are not interested in his creation of a new religion. Perhaps one of the most interesting characters of all is Shin. Shin, a close friend of Jason, becomes enamoured with the religion to the point that he starts writing a gospel of the religion. He actually hears the water tower speak to him and has recorded it. He has many, many pages of the gospel of the new religion transcribed, as he says, the "Tower speaks to me, I hear it inside my head." Yet through all the troubles and travails, there is a persistence that Jason displays and in his mind; and the minds of most of his followers, he has prevailed. Even if it has to be sub rosa, as those around do not accept even the discussion of the topic, it is still his rite. He is still entitled to do it, in America. The book is highly recommended for all people over the age of 13. It is especially illustrative of a phenomenon repeated all over the world many times. The book cites Joseph Smith's Church of Latter Day Saints and L. Ron Hubbard's Church of Scientology, but does not dwell at all on their philosophies, just mentions them as new religions. And in how many places aside from America, are citizens free to do this? Not many at all.

Published by Thriftbooks.com User , 17 years ago
First, I loved the characters. It was great to hang out with them. Second, I loved what it was about. Godless shows you how a religion could come to be--how it could actually be created. Pete Hautman always takes on big issues in his books: Sweetblood--vampires and diabetes, Mr. Was--abuse and time travel, Stone Cold--gambling. In this new book, he decides to take on a huge issue--what and how we believe God to be. Godless is serious and funny at the same time, at the same moment. You can be laughing about what a character is saying and yet it can be painful and true.
Copyright © 2020 Thriftbooks.com Terms of Use | Privacy Policy | Do Not Sell My Personal Information | Accessibility Statement
ThriftBooks® and the ThriftBooks® logo are registered trademarks of Thrift Books Global, LLC