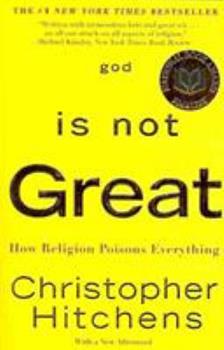 God Is Not Great: How Religion Poisons Everything

Whether you're a lifelong believer, a devout atheist, or someone who remains uncertain about the role of religion in our lives, this insightful manifesto will engage you with its provocative ideas. With a close and studied reading of the major religious texts, Christopher Hitchens documents the ways in which religion is a man-made wish, a cause of dangerous sexual repression, and a distortion of our origins in the cosmos. With eloquent clarity, Hitchens...

Published by Bill1959 , 1 month ago
Christopher Hitchens was an obviously intelligent and inciteful person. His understanding of religion and his atheist belief are not based on training or inculcation - they're based on a logical and rational view of what religion is. His wit can be cutting and amusing but the forceful, reasoned, and logical arguments are the meat of this work. A great read and an even greater eye opener.

Published by Vegaskrew , 8 months ago
Please give this a read if you have wasted your life crediting an imaginary figure. It will make you squirm learning about all the facts of how religion is dangerous. But like the say, growth is uncomfortable.

Published by Marc , 1 year ago
Like everything Hitchens writes this book was extremely well researched and a pleasure to read.

Published by Gabriel L Delatorre , 3 years ago
If you have questions about your faith, or already an atheist looking to get more information then this is the book for you.

Published by Thriftbooks.com User , 15 years ago
Part of the recent effusion of bestsellers providing an explanation of the underpinnings of the atheist / secularist worldview, Hitchens' book approaches the subject from a different angle; and it deserves space on your shelf. This book concentrates on dispelling the moral and utilitarian pretensions of theism rather than engaging in a detailed analysis of why their specific claims about the universe at large lack support. Hitchens' style, unlike that of Dawkins or Harris, for instance, emphasizes argument-by-anecdote. He tells stories about people and events which he links up to social movements, political events or philosophical principles. This makes his book eminently readable, especially for newcomers to the subject. Still, he can be quite galvanizing, to say the least; so I would hesitate to make this a book club selection for people I do not know well. Hitchens' book provides what I think of as "cocktail party atheism" rather than the more rigorous argumentation presented by others, e.g., by Dawkins, Dennett or Ehrman in their books. As such, Hitchens' book, while entertaining and educational, does not lessen the value of reading the wider body of secularist literature.

Should Be Taught in School

Published by Thriftbooks.com User , 15 years ago
Mr. Hitchens brings his extensive education and experience to bear, examining the hegemony of religion in the world, past and present. A supremely articulate advocate of Reason, he has done humankind a great service in asking the questions which lead toward the emancipation of our civilizations from the tyranny of religious mystification. Mr. Hitchens's is the consciousness which alerts us that "the Emperor has no clothes!"

Published by Thriftbooks.com User , 15 years ago
Hitchens has brilliantly and logically articulated what the many (though relatively small) who share his view have long felt. Religion is so entrenched in our and the world's culture that there is little hope that anything can change despite the reasoned thinking of writers like Hitchens, Dawkins, and Harris. What a shame.

And thus he spake...

Published by Thriftbooks.com User , 15 years ago
My favorite part of the book is the last third. By that time Hitchens has made his arguments about how Religion Poisons Everything and is now rebutting the best intellectual arguments against his thesis. What would become of human decency, morality and ethics without religion? How do you address the inherent human need to believe in something and take comfort in a higher power? What are the god-less alternatives and aren't those institutions as bad or worse? Doesn't religion provide stability to society by pacifying individuals in times of darkness and uncertainty? It is hard to sum things up and provide sound bytes about something as complex as religion, but my take-away from this book is that any religion (by design) has the ingredients of becoming totalitarian, when successful; and totalitarianism of any kind leads to ultimate power corruption. Hitchens makes his arguments and rebuts the best counter-arguments with passion and panache. If you are amongst the majority of people in the world - believers - his irreverent sense of humor may lead you to immediately brush him off as a partisan hack; while the unbelievers will get a kick out of each of the thousands of punchlines that Hitchens artfully mumbles. However, if you belong to the third category - an intellectual who chooses to look beyond a bi-polar view of the world when it comes to religion - I would urge patience with Hitchens' indulgence as a genius linguist (when you have it, it is hard not to flaunt it!) and you will find this book extremely rewarding and will not go un-satiated. If you are seriously debating the merits and demerits of religion as an institution in the society we live in, you have glanced at the perfect place, no matter what your affiliations. If you are looking for education on the various major religions in the world, their origin, history, interconnection, impact, popularity, etc.; this is NOT the right book for you. The book presupposes basic knowledge about these topics, and on several occasions I felt that I lacked the prior knowledge to appreciate many nuances in Hitchens' arguments. Hitchens is no economist, and he does not get into numbers and measurements. But Hitchens is a seasoned intellectual, and does utter the voice of reason grounded in the sound principles of philosophical debate. His knowledge and wisdom about religion are comparable (arguably) with "good" reverends and pastors. The book is written in commentary style, but does have a semi-structured flow to it. Just like this book lashes out at totalitarianism in the form of religion, I wish someone writes a book lashing out at totalitarianism in its other most ugly form in the modern world - Nationalism.

Published by Thriftbooks.com User , 15 years ago
Christopher Hitchens, in his hard-hitting and revealing new book, "god is not Great", has found the courage to say what so many of us have thought for a long time...religion is its own curse and has been a plague endured by millions for centuries. With science and reason as his guide, Hitchens debunks just about everything from god and the Bible to Christianity, Judaism, Islam, Mother Teresa and more... and he does it with a breathtaking panache. It's the best book on this subject I've ever read. No mere bystander when it comes to faith, Hitchens recounts his own associations with religion and how he moved to his current intense feelings about the topic. As a lapsed Christian who has moved towards atheism, I found myself concurring with just about everything he says. Not content to simply disagree with the faith-based crowd, Hitchens lambastes them. Good for him. The chapters in this book are all relevant to 2007 and some really stand out. One chapter entitled "A Note on Health", gets this book going full steam and another one toward the end, "Is Religion Child Abuse?", cuts to the quick. The Catholic Church, to Hitchens's credit, comes under scathing attack...I wish he had written even more about the abuses that this institution has caused. Hitchens warns about secularism, too, (citing non-religious movements such as Fascism and Communism and the immense suffering they have inflicted). But it is religion itself that Hitchens finds almost intolerable. He closes by saying "religion has run out of justifications...it no longer offers an explanation of anything important". Bull's-eye! Religion should be in the business of putting itself out of business. "god is not Great" is an important book in large part because it demonstrates convincingly that science has trumped religion and continues to, everytime. The depth which Hitchens tackles religion and its ramifications is matched by a compelling narrative style that has become the author's "signature". I highly recommend this book for its courage to tell the truth.
Trustpilot
Copyright © 2022 Thriftbooks.com Terms of Use | Privacy Policy | Do Not Sell or Share My Personal Information | Accessibility Statement
ThriftBooks® and the ThriftBooks® logo are registered trademarks of Thrift Books Global, LLC