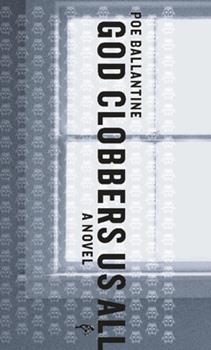 God Clobbers Us All

Set against the decaying halls of a San Diego rest home in the 1970s, God Clobbers Us All is the shimmering, hysterical, and melancholy account of eighteen-year-old surfer-boy orderly, Edgar Donahoe, and his struggles with romance, death, friendship, and an ill-advised affair with the wife of a maladjusted war veteran. All of Edgar's problems become mundane, however, when he and his lesbian Blackfoot nurse's aide best friend, Pat Fillmore, become...

Nihilistic with a promise of something thereafter

Published by Thriftbooks.com User , 16 years ago
This is a play in which the actors keep disappearing, (gone missing), while the set director dutifully keeps to his task of moving the scenery around, until no one is left. Still he is a really cool set director, someone like Robert Wilson maybe, (the structure of this novel should not disappoint anyone). The author has sense of humor, with pratfalls and pulling the rug out from under the audience; he distracts us from his Chandleresque task, to uncover San Diego, once know as America's Finest City, which is now America's most rotten city. It is the place Poe always warned us about, the place people go to dissipate away what little they have won from life. Here the best and the brightest immediately dive for the bottom, (to avoid the stench of rotting seaweed on the shore) with no hint, or promise that they will ever come up for air. Some are lost, but the rest arrive unsullied. Truthfullness remains the one salient feature of this story, and a promise of something thereafter.

Never shirk a chance at an adventure

Published by Thriftbooks.com User , 16 years ago
Big Pat Fillmore, the lonesome snorting alcoholic Blackfoot lesbian nurse's aide, who never shirks a chance at an adventure, is the unlikely best friend of Edgar Donahoe, cerebro-cool teen acidhead surfer of 1970's San Diego suburbia. God Clobbers Us All concerns itself with these two nurse's aides and how they deal with the emotional consequences of their accidental killing of a fellow worker. Within this framework is an excellent study of young people transformed by daily exposure to the verboten death and degeneration secrets of modern western society. "Chula sits close to me and nibbles my ear. Nurse's aides, in my experience, are the most sexually active group outside of nymphomaniacs, prostitutes, and meat packers. We also party hardier per capita than any other occupation, not only because we are poor and our futures are dull, but also because we see every night firsthand the terrible and heartbreaking things that are going to happen to us when we grow old." The novel, although it may appear to romanticize libertinism, is as good a text as any on the certain fate of the counterculture epicurean. It's also chilling testimony on the places where our worn out mothers and fathers are sent. This is a very fast read with a wonderful "feel" and many places to flex your laughing muscles. The prose is so effortless it's rather easy to sail over without registering any depth. Anyone accustomed to seeing Ballantine's tough, melancholy essays in The Sun, as I note in two languidly composed reviews below, might be better served by his outstanding essay collection, Things I Like About America.

Published by Thriftbooks.com User , 17 years ago
Poe Ballantine's writing breaks my heart. You'll catch yourself laughing at the little personal tragedies of his unique and vivid characters, and then sighing when you understand that life's never gonna be easy. In the end you may want to cry, feeling like you've lost your best friends. At least I did. I can heartily recommend this book with no reservations. It's my opinion that Ballantine is one of the best writers of his generation: his prose style seems so simple and easy, which lets the reader get intimate with his characters. But at the same time the writing is very polished. It's chock full of keen observations from a writer's eye. Go out and buy this one and then find an empty afternoon during which you can cozy up with a cup of tea and a blanket.

Published by Thriftbooks.com User , 17 years ago
In God Clobbers us All, young, inexperienced Edgar undergoes numerous life-changing events that lead to a no-holds-barred life of illicit drugs, alcohol, and sexual relationships. Those who grew up in the 1970's will find Ballantine's descriptions strikingly accurate and often hilarious.

Published by Thriftbooks.com User , 17 years ago
Imagine Raymond Chandler's hero reincarnated in the mid-70s as a hapless teenage surfer more interested in scoring drugs and getting girls than in solving mysteries, and you've got "God Clobbers Us All." There is a mystery at the center of this book, but what's equally compelling is the world of Edgar Donahoe and his friends, who work as orderlies and aides in a nursing home where death is a mundane occurrence, and who escape their stagnant lives through any chemical and carnal means possible. Ballantine's plotting is fast-paced and engaging, and his snappy prose is full of over-the-top metaphors reminiscent of (or in tribute to) Chandler. Irreverent and often hilarious, this is a highly entertaining book from start to finish.
Copyright © 2022 Thriftbooks.com Terms of Use | Privacy Policy | Do Not Sell My Personal Information | Accessibility Statement
ThriftBooks® and the ThriftBooks® logo are registered trademarks of Thrift Books Global, LLC