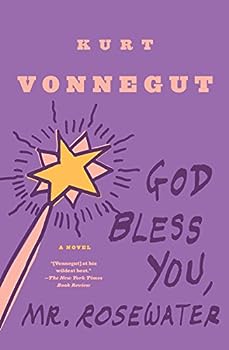 This description may be from another edition of this product. " Vonnegut] at his wildest best."-- The New York Times Book Review Eliot Rosewater--drunk, volunteer fireman, and President of the fabulously rich Rosewater Foundation--is about to attempt a noble...

Novel That Speaks to the Unfair Lottery of Life

Published by Reader , 2 years ago
Growing up poor, I can truly relate to this novel and the sometimes unpleasant realities that so many people live. The ridiculous way that some people are given so much, for nothing better than having certain relatives, while others bust their tailbones just to get by is what this book gawks at. It was nice to read a book that focused on and addressed some of the insanity that happens when people gain influence. I'm not so sure wealthy people could appreciate this novel, as much as I have, but beyond the economic injustices that this book addresses, there are lessons in this book that are prevalent through every class in America. Perhaps the ability of this book to reach a wide ranging audience Americans, with their understanding of their culture, can all recognize our America is what makes it so meaningful. Although Vonnegut has passed, and this book was not written today, I believe it will ring relate able in the future to come, as 1984 by George Orwell (Eric Arthur Blair) has seemed to. Definitely a book that can prompt for self reflection, if that's what one's looking for.

Another masterpiece from Vonnegut

Published by Thriftbooks.com User , 15 years ago
In "God Bless You, Mr. Rosewater" Kurt Vonnegut (one of my favorite authors) takes on the class system, capitalism, and philanthropy to splendid, wickedly funny -- and hopelessly accurate -- effect. It is the tale of the Rosewater family, which has amassed a fortune totalling $87,472,033.61 and devised an elaborate foundation to protect their money from the American government that would try to tax it away from them. Through meaningless acts of "charity" (such as loaning expensive art to a museum for an exhibition, and then taking it back) the foundation ensures that the Rosewater fortune will always be firmly controlled by the Rosewater family. Trouble brews when an ambitious young lawyer decides to prove that the current foundation head, Eliot Rosewater, is crazy so that an estranged cousin can take over -- getting the lawyer a nice chunk of the family fortune in the process. This will not be so difficult to do because Eliot has been doing the unthinkable since taking over the foundation from his Senator father: he has been using it to do actual charitable work. You see, Eliot suffered a breakdown after accidentally killing three innocent firefighters (one a mere fourteen years old) in Europe during WWII. Desperate to atone for his mistake, Eliot has returned to his hometown of Rosewater, Indiana to make a difference in the world. Within a year he has spurned the wealthy families in town who aspire to his company and come to be revered by the impoverished townsfolk as a saint. He helps anyone who needs it -- in one instance he has an abusive husband arrested, then turns around and hires him a lawyer when he can't afford one on his own. To the world at large these are the actions of a man who has totally lost his mind. But has he? Vonnegut masterfully navigates the reader through the saga of the Rosewater clan and the novel's themes with only one stumble to be found in the all-too quick ending. The rest of the book forgives this mistake. You can't go wrong with Vonnegut, and in "God Bless You, Mr. Rosewater" the remarkable author is at his satiric best.

The Tale of St. Eliot of Rosewater

Published by Thriftbooks.com User , 17 years ago
Eliot Rosewater was the scion of an extremely wealthy family- his grandfather had even married a Rockefeller. Eliot stood to inherit control of the vast family fortune through the Rosewater Foundation (a legal entity constructed to shield that fortune from taxation.) But then Eliot went off to WW2 to become a highly decorated Captain of combat infantry. He served with men from all walks of life. Oh yes, he also accidentally bayoneted a 14-year old non-combatant, and afterwards tried to throw himself under a truck. After this he was never the same, much to his rich and powerful family's distress. While he did come back to graduate from Harvard Law and assume control of the foundation, he started behaving...irrationally. He started to actually use the money to HELP people! He also started drinking, wandering, and visiting volunteer firehouses- among other eccentricities. Eventually, he ended up in Rosewater, Indiana- a depressed backwater that his family had long ago used up and abandoned to found the beginnings of their fortune. He found the people there to be without pride, without hope, without work. So he opened up an office over the liquor store in order to help anyone who needed his help. The sign on the door said simply, "Rosewater Foundation: How Can We Help You?" So Eliot Rosewater, philanthropist, poet, volunteer fireman, Harvard graduate, and drunk proceeded to help any and all that came to him for help. Needless to say his family could not allow such insanity to continue. Why even Eliot's psychoanalyst came to the conclusion that Eliot was a pervert. The nature of his perversion being the fact that he had channeled all his psychic energy into bringing Utopia to earth for all those in need. What could be more abnormal in modern, capitalist society? This is my absolute all time favorite Vonnegut novel- and I have read them all. Oh yes, it also offers one of the best descriptions of the absurdity and injustice of the class system in the U.S. As one of the characters asks, who does run this crazy country? These cr**ps sure don't.

Published by Thriftbooks.com User , 19 years ago
There was something in Vonnegut's first rush of books that is lacking in his later novels. Although I enjoy his later books and for the life of me I can't say what this mystery quality is, whatever it is it tends to elevate even his minor books into affairs that are far more memorable than they tend to be. Maybe because the themes and images he's using here were new to him and he was still comparitively young . . . I don't know. It's not for me to say. This novel has a simple premise and a simple plot and moves unsurprisingly from point A to point B and yet I still have an incredibly enjoyable experience reading it, even though I finished it basically on my lunch break over the course of maybe an hour and a half. The premise then is that Eliot Rosewater has a lot of love to give to the world and spends most of his time doing very nice things for people who are almost pathetic enough to not deserve it, simply because he was born rich and feels he has a lot to give to the world. A lawyer, meanwhile wishes to prove that he is insane and has it in him to make quite the case. The book basically waffles back and forth between the lives of the various people Eliot helps, the comically depressing lives of some of these people, a little Rosewater family history and the lawyer's attempt to gather information on Eliot's apparent insanity. All of these pieces don't cohere into the great whole that his absolute best books (like Slaughterhouse-Five) do, but the pieces themselves are great fun and Vonnegut's humanity has never been as apparent here. It doesn't have the grim central event like the bombing of Dresden to put everything in context but somehow he manages to make the book moving and hilarious at the same time. The plot of course is slight and it's a fairly direct book, though the ending is about as abrupt as can be (and is mentioned in a later Vonnegut book I think, fortunately I forgot about it). This won't ever be regarded as one of his classics but even a minor work by an author working at his peak is worth another look and while the rewards here may not be as grand, they're simple and pleasant in their own small way.

Published by Thriftbooks.com User , 21 years ago
"God Bless you, Mr. Rosewater", is one of Kurt Vonnegut's greatest books. It is based around Eliot Rosewater, a warm hearted, eccentric millionare, and presendent of the Rosewater Corporation, a incredibly rich foundation that is passed along from father to son. He abandons the high life in NYC, and moves to Rosewater County in Indiana, his family's home. Eliot begins to help the poor people (which is all of Rosewater County) with their personal problems, and soon becomes the "father" of them all. A lawyer, seeking the Rosewater fortune for himself, sets out prove that Eliot is insane. I won't tell you the ending, but suffice to say that it is excellent. Vonnegut shows us thatmoney isn't everything, and a poor person from Indiana is just as important as a Senator from New York. A matchless book.

Published by Thriftbooks.com User , 21 years ago
Just as most of Vonnegut's novels follow a single character through a series of semi-plausible episodes, so does 'God Bless You, Mr. Rosewater'. However, unlike the others, this story does not rely on science fiction. Rather, it focuses on one man's struggle to affirm his sense of self against great odds. Seems like an appropriate theme in a society increasingly concerned with style and ignorant of substance.
Copyright © 2020 Thriftbooks.com Terms of Use | Privacy Policy | Do Not Sell My Personal Information | Accessibility Statement
ThriftBooks® and the ThriftBooks® logo are registered trademarks of Thrift Books Global, LLC