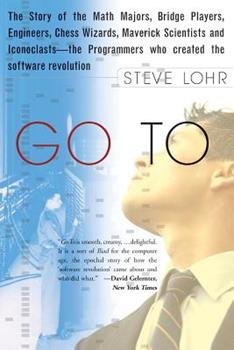 Go to: The Story of the Math Majors, Bridge Players, Engineers, Chess Wizards, Maverick Scientists, and Iconoclasts-- The Pro

In Go To, Steve Lohr chronicles the history of software from the early days of complex mathematical codes mastered by a few thousand to today's era of user-friendly software and over six million professional programmers worldwide. Lohr maps out the unique seductions of programming, and gives us an intimate portrait of the peculiar kind of genius that is drawn to this blend of art, science, and engineering, introducing us to the movers and shakers...

Don't be so harsh!

Published by Thriftbooks.com User , 18 years ago
This book isn't aimed specifically at experienced programmers, but rather at the general public. My mom could read it. That doesn't even mean it's a bad book if you are a programmer. It's an amazing software-history crash course and a must for younger programmers. The emphasis is on the people and concepts, not on technicalities. This is why I disagree with the other reviewer who suggested "The Design and Evolution of C++" instead of this book. While Stroustrup's document is also a must for any serious programmer, it only covers the history of C++, and his motivations for particular features of the language. GOTO on the other hand gives a birds-eye view of software and software development from the ENIAC to open-source Linux in a simple and concise way.I found the writing to be good and funny, making it an enjoyable read. Quotes are used very well and the information that each page is full of is well layed out on the length of the book. The author stays objective and doesn't impose you his opinion as some of the more "controversial" topics are often revisited from different perspectives, giving you the chance to make your own mind.An enjoyable and instructive book.

The Wordly Philosophers' of Software

Published by Thriftbooks.com User , 19 years ago
He never says so, but Steve Lohr has set out to do for the profession ofcomputer programming what Robert Heilbroner did for economics in his "TheWorldly Philosophers," ie explain the discipline mainly through the stories of itsleading practitioners and the problems they addressed. For the most part, he succeeds admirably. There are several finehistories of computing, but none until `Go To' that focused entirely onsoftware. Its narrative is the evolution of programming over the years and itcovers a lot of ground, unlike the more focused approach found in books likeSteven Levy's "Hackers" (the hardware and software innovation that came fromMIT) or Michael Hiltzik's "Dealers of Lightning" (Xerox PARC as theintellectual birthplace of personal computing). Lohr nods to previous developments, but his narrative really begins with theteam led by John Backus that developed Fortran. It continues into the 1960s andthe sense of limitless horizons at the time, with its enthusiasm for artificialintelligence. Then comes COBOL, the achievement and disillusionment of IBM's360 Operating System, the "software crisis" of the late 1960s and the rise ofsoftware engineering. And on it goes, the story of Ken Thompson and DennisRitchie developing Unix and C at Bell Labs, Bjarne Stroustrup creating C++,James Gosling leading the development of Java. The well-worked ground is handled in non-obvious ways. Bill Gates and Microsoftare seen through the prism of the rise of BASIC from its Dartmouth origins toits Wild West days of the early microcomputer industry to its domestication asVisual Basic. The Xerox PARC contribution is handled in a long, fascinatingprofile of Charles Simonyi, a Hungarian teenager who defected to the West andwhose programming skills took him to Berkeley, Stanford and PARC, where hecreated Bravo, the predecessor to Microsoft's Word. The open-source phenomenon begins with the story of the Apache project, seguesto Richard Stallman and Linus Torvalds and ends with IBM's pragmatic embrace ofLinux. Judging from the source notes, if a person was alive, Lohr interviewedhis subject, often repeatedly. If not, he consulted the oral histories and thelike at places like the Babbage Institute and the Computer Museum. The writing is clear, often elegant and never overwrought. The onlybreathless writing is the book's title, which seems to be a stretch by apublishing house's marketers, hoping to attract a broader audience byportraying programmers as the stereotype of eccentric nerds. `Go To' is entertaining, but in a cerebral sort of way. It has personal andhistorical details that most programmers will find new, but its explanations ofsome of the basic principles of programming will help make software moreaccessible to interested general readers.

Published by Thriftbooks.com User , 19 years ago
I enjoyed this book very much. It was certainly true that nobody could predict who would be a good programmers. I must confess that I picked those who were intelligent and enthusiastic. It sounds like a jungle out there.Now for my hot buttons. Why am I not surprised that the history is wrong? It's because the author suffers from the writers' "Curse," assuming things written down are the truth. Johnny von Neumann never even saw the ENIAC until its design was fixed and the system almost built. He did consult with Dick Clippinger and his programming group from 1947/48 when they turned the ENIAC into a stored program computer. At that time, people were presenting various instruction sets for computers and von Neumann suggested a one-address code with a central accumulator architecture for the ENIAC, which we used. My group at the Moore School was under contract to do the ENIAC programming. Actually, Dick Clippinger, Adele Goldstine and I, with some help from DRs. Giese and Galbraith from Aberdeen did the actual programming. When von Neumann saw the ENIAC, he was excited by it and, learning Pres Eckert and John Mauchly and their design team were already at work on EDVAC, the ENIAC successor, he asked if he could sit in on the meetings. The EDVAC design already included the stored-program concept. See Eckert's interview with Peter Vogt for the Smithsonian Computer History Project. After a number of meetings, von Newmann skipped some meetings to go to Las Alamos, but he sent back the article, which Pres and John took as an internal document, summarizing the content of the meetings. Other members of the team were not allowed to write or talk about it. Goldstine, who was the Security Officer distributed von Neumann's article widely. Some Security Officer. Both Goldstine and von Neumann came from the University World where publishing is used to stake out claims. Both knew exactly what they were doing. They betrayed their colleagues and continued to do so. When Pres and John applied for an EDVAC patent, they discovered that this enterprising duo had already applied. Not too many people took von Newmann seriously when he said he did it to ensure that it remained in the public domain and not used for commercial purposes. Apparently, Goldstine felt von Newmann was a better meal ticket than one from Pres and John. He was wrong. Pres and John went on to develop BINAC, the first stored program computer. Yes, it ran for 48 hours without an error in March 1949. Reported in the Franklin Institute newsletter. Then, they went on to build the first electronic commercial computer. As far as I know, nobody, other than the organizations von Newmann consulted with, ever built the Johnniac while the computer industry switched with UNIVAC to the commercial world.I could continue on, but I know I am unfair to expect you to buck the tide. However, I am now 77 years old and I feel that someone should tell the truth, and if not me, who?

Published by Thriftbooks.com User , 20 years ago
This is a good book on the technical and intellectual development of system and utility software from Fortran days to now. It is meant to be an overview of some of the high lights of the technical developments and most interestingly the people and the players. The author purposefully does not cover application software and the huge effort and development in those areas whether in a product like Mathematica or in computational fluid dynamics programs. He certainly captures the flavor of the operating system, compiler, and utility developments that were so critical to progress in computers.The book is strongest where the history is known. Present day developments such as Linux and open software along with the key people are discussed in the last chapter, but no one knows yet what importance will come of that, and this is left up in the air.There are not that many books that range over the history of software development as this one does. Lohr is no gee whiz amateur; this is a solid professional job where the flavor of a development is really captured (at least in my view). One can just imagine how the development of Fortran opened up immense possibilities in simulation and modeling. Good word processors had broad applications and made life much easier for all of us. Lohr chooses his subject and enlivens it.He discusses the people involved in many of the developments with a varying degree of detail, so we capture some of the flavor of the personalities. This is done well without giving us ranging biographies or too much psychoanalysis. This is a book well worth reading.

Published by Thriftbooks.com User , 20 years ago
For a narrative history of computer programming, from the pre-Fortran days to the present, this book does a remarkably good job. It describes in vivid, readable fashion the people, the period, and the problems they solved. It also gives the reader a real sense of the kind of creativity involved in programming, the excitement and what it takes. The book is filled with neat historical tidbits (from the origins of the term "beta" to the notes of Charles Simonyi, a Xerox PARC refugee who joined Microsoft, to Bill Gates, laying out much of that company's plans for the next 20 years). For anyone interested in software, and the extraordinary cast of characters behind the technology, this book is a clear, well-written, authorative survey. It covers a lot of ground -- and it it does it awfully well!
Copyright © 2020 Thriftbooks.com Terms of Use | Privacy Policy | Do Not Sell My Personal Information | Accessibility Statement
ThriftBooks® and the ThriftBooks® logo are registered trademarks of Thrift Books Global, LLC