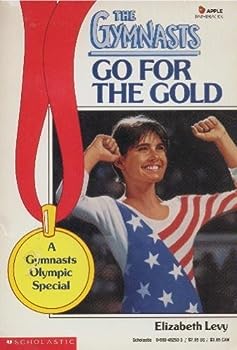 Go for the Gold

(Book #22 in the The Gymnasts Series)

Over her bout with anorexia, Heidi Ferguson feels she is ready to compete again, and when she is picked for the Olympic team, she realizes her dream could come true. This description may be from another edition of this product.

Published by Thriftbooks.com User , 22 years ago
I read this book when it first came out, and I had been following the Gymnasts series. At the time I was a gymnast myself, so they were very enjoyable to read. Go For the Gold was definitely my favorite! I take the book down and re-read it a few times each year, mainly after I see gymnastics on TV. I am 24 now and I still like this book as much as when I first read it. For anyone who really likes gymnastics, whether a child, teen or adult, this book is alot of fun and shows what being an elite gymnast might be like.

moving through adversity and onward

Published by Thriftbooks.com User , 22 years ago
I enjoy reading young adult books where adversity is shown in a truthful and realistic light, especially those that involve eating disorders, domestic violence or emotional problems. Most families aren't the cliche of "Leave it to Beaverville" and I like seeing alternative family units as in the book, "The luckiest girl in the world" by Steven Levenkron. "Go for the Gold" embodies adaptation to deal with stressors, anorexia, and shows where a life can go beyond the difficulties. I would recommend this one and Levenkron's young adult book mentioned above which portrays a broken family struggling with past abuse and how the baggage lingers and causes harm. I also recommend Ann Martin (Amalia), Francesca Block (The Hanged Man), and Deborah Hautzig (Second Star to the Right) which all involve the above mentioned topics. We have all read books about the two parent higher income family, blond successful girl with anorexia who needs more attention. "Go for the Gold" moves a step beyond the basic cliche and shows what is before and beyond the struggle. It adds the nice touch of revolving around gymnastics instead of ballet.

I think this book is really great.

Published by Thriftbooks.com User , 25 years ago
Go For The Gold, by Elizabeth Levy is a really great book. It tells you what it's like to compete in the Olympics. I'm not a gymnast but ever since I started reading this book I've liked gymnastics much more. It's great!!
Trustpilot
Copyright © 2022 Thriftbooks.com Terms of Use | Privacy Policy | Do Not Sell My Personal Information | Cookie Preferences | Accessibility Statement
ThriftBooks® and the ThriftBooks® logo are registered trademarks of Thrift Books Global, LLC