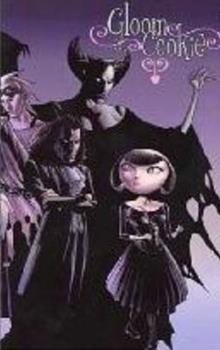 (Book #1 in the GloomCookie Series)

Published by Thriftbooks.com User , 14 years ago
I'm a huge fan of ted naifeh, this book is a huge start to this series. Highly entertaining and amazing art work. Its unfortunate Naifeh wasnt on hand for the rest of the series because it doesnt get much better than book one. From here it gets somewhat scattered and brief. This is one is definately the best. The storyline can be almost addicting to the point where you really want to read whats next even if the previous one didnt catch your intrest entirely. I got through the series typically hoping the next one was good as the last or the next is better than the rest.

Published by Thriftbooks.com User , 19 years ago
At first when a friend got me a copy of Gloomcookie, I was afriad it would be just a ripoff of some other goth genre comic (Like Sandman or Jhonny the Homicidal Maniac). But when I flipped through it, I was suprised with the originality, pleased with the humorous writing style, and impressed by the slick black & white artwork.Gloomcookie is a fun read, and great for anyone girl who has ever dreamed their boyfriend would turn into a gargoyle, kidnap her from her job in order to escape from Vincent Price, fly her to New Orleans and then take her shopping. This is a very girl friendly comic, which focuses on relationships and breakups, new relationships and agnst. Obviously, it is not exclusively for girls, I'm sure that anyone with an interest in goth culture would like it. In many ways it is right on, from going to the clubs, coming home alone, then going out for coffee and complaining to your friends. It pokes fun at goths too (mostly making fun of bad poetry, and LARPers) but the humor isn't offensive. All in all, this is a good read.

Published by Thriftbooks.com User , 19 years ago
Wow. What an amazing foray into the world of the ultra-hip goth with an immensely appealing cast of characters. Lex, with the hair that curls under just right, who is deeply in love with Max, who does not love her (though he will share her bed). Instead, Max loves the dark queen Isabella, who loves no one but herself, but has darker secrets than that to harbor. Sebastian, with a past that he only knows the most tintillating bits about, and his girlfriend, who has even more secrets. And we mustn't forget the Monster Under the Bed or the others cast in the dark and lonely world of Gloom Cookie. With beautiful dark (and yet somehow simultaneously cute) artwork, Serena Valentino and Ted Naifeh present a story of loves unrequited, loves requited that perhaps should not have been, and the machinations people ... and others... will go to get what they want. I wonderful foray into gothic (no, really) comics, with more yet to come.

Published by Thriftbooks.com User , 19 years ago
For anyone who wants to approach the Goth lifestyle from an aloof perspective, search no further! Gloomcookie manages to incorporate all the tragic, yet inescapable aspects of those of us "Dark" individuals -- love gone wrong, revenge, and yes, even **BAD** Goth poetry. The characters really are interesting and fresh, particularly the love sick Vermilion and the sassy, taunting Chrys. Definitely worth your time and money.

Published by Thriftbooks.com User , 20 years ago
When I started this graphic novel, I wans't at all sure that I would enjoy it. Having read the comics of Jhonen Vasquez (I Feel Sick, et al) and Neil Gaimen (Mr. Punch and Sandman), I was Gloomcookie's target demographic, but it was the commnets of another customer that sold me. He told me that he never cries and that he cried numerous times while reading Gloomcookie. Then, he said he was usually laughing while he cried; the humor was so dark. Although I shed not a tear throughout my reading, I am at the comic book store every Wednesday to see if they got the new issue in. So, why is it good? As another reviewer pointed out, there is a lot of catty, 6th grade conversations with rather purile behavior. That, to an extent, is true. Valentino is satirizing goth culture: the silly poems, the silly outfits, the silly cliques. If all the characters talked and behaved like mature adults, there would be no power in her punch. But the comic also shows good writing in not so much character dialogue, but plot formation. In one series there is a love story (that seems to stem from past lives and a recurring dream--I don't know that hasn't been completely reveled), an evil witch (who is also a monster), a benevolent monster under the bed, a cannibalistic girlfriend, a circus for a family and role players for whom the game is never over. While this may seem 200 pages of goth knocks and jokes, it simply shows the capacity of the sub-culture to laugh at itself (assuming that someone besides me laughed). But you don't need to be familar with Goth culture/comics/music to laugh. We all know people like this and sadly, will recognize someone in every character.And, as have been covered in other reviews, the art is spectacular. However, beyond Issue 6 (the last issue in the novel), John Gebbia illustrates, not Ted Naifeh. Gebbia has a different style and there are minute changes in the features of the characters, but the comic doesn't lose its dark feel. Just so you know, this comic is in black and white for those of you addicted to slick production.
Copyright © 2020 Thriftbooks.com Terms of Use | Privacy Policy | Do Not Sell My Personal Information | Accessibility Statement
ThriftBooks® and the ThriftBooks® logo are registered trademarks of Thrift Books Global, LLC