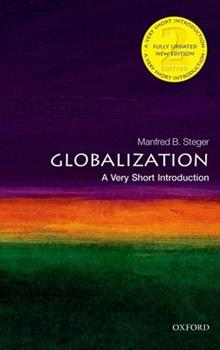 by Manfred B. Steger

'Globalization' has become one of the defining buzzwords of our time - a term that describes a variety of accelerating economic, political, cultural, ideological, and environmental processes that are rapidly altering our experience of the world. It is by its nature a dynamic topic - and thisVery Short Introduction has been fully updated for 2009, to include developments in global politics, the impact of terrorism, and environmental issues.Presenting...

Published by Thriftbooks.com User , 13 years ago
Manfred B. Steger's book Globalization is part of the Very Short Introductions series put out by Oxford University Press. The series is called that because each book in the series is a brief treatment of a particular topic, like Cosmology, Postmodernism, Intelligence, Drugs, or Animal Rights. In Globalization, Steger keeps his introduction to 147 pages, making it true to the series name. Steger has written Globalization with both erudition and clarity. Striking that balance between precision and perspicuity is no easy task, but Steger manages to succeed. In chapter 1, Steger decides not to protect the reader from the controversies surrounding the concept of globalization. He then takes his readers on a historical tour, showing how globalization has been happening in different ways ever since humans appeared on the scene (ch. 2). The meat of the book comes in chapters 3-5, where Steger expounds on the economic, political, and cultural dimensions of globalization. In chapter 6 Steger makes a careful distinction between globalization and globalism. The former, he explains, is a description of social processes, while the latter is an ideology endowed with neoliberal meanings and values. Earlier in the book Steger gave his readers another helpful distinction, separating globalization as social processes from globality as a social condition (p. 7). Chapter 7 highlights the recent key challenges to globalism in the form of particularist-protectionism and universalist-protectionism. Chapter 8, capping off the introduction, contains a brief assessment of the future of globalization. Although I had read about globalization before, and most of the concepts discussed inside are not new to me, Steger's volume on globalization has turned out to be the best introduction to the topic that I've come across

Published by Thriftbooks.com User , 15 years ago
Steger begins by defining the term "globalization": A "set of processes" (not a "condition") towards greater interdependence and integration among the various cultures of the world. He makes a point to emphasize that economics is only ONE aspect of globalization: there are also political, cultural and ideological aspects. Moreover, he dedicates one chapter to showing that globalization is by no means a NEW phenomenon: cultural exchanges can be traced back to the prehistoric period. I found the chapter on the economic aspects of globalization (chapter 3) very useful. It explains the history and role of the IMF, WTO and the World Bank in the global economy. It also discusses the West's transition from "controlled economies" to "free market capitalism." Arguing that globalization is an uneven process, the author shows how it is having very different effects on the various regions of the world. This gives us a clear vision of some of the negative impacts of the new world economy, such as a larger gap between rich and poor nations. His realistic view of globalization is a nice antidote to the cheerleading of hyperglobalizers like Thomas Friedman. The chapter on opposition to globalization (chapter 7) does an excellent job of explaining challenges that are coming from both the right and the left. The particularist protectionists (on the right) feel threatened by multiculturalism because they want to maintain a sort of cultural purity. This often leads to their rallying against immigration and appealing to nationalism. However, like the left, they also criticize the power of the corporate elite and the negative effects globalization is having on the average domestic worker (i.e., jobs going overseas, lower wages). In the US, Pat Buchanan is a good example of this view. The universalist protectionists (on the left) tend to criticize the poor working conditions of both domestic and foreign workers. In general, universalist protectionists "are concerned with protection of the environment, fair trade and international labor issues, human rights, and women's issues." Ralph Nader is an example of a universalist protectionst. Overall, an excellent introduction to the various facets of one of the most important issues of our time.

Published by Thriftbooks.com User , 16 years ago
This little book is a concise and sophisticated and very readable account of a very significant process in the world today. It objectively examines the positive and negative consequences of the globalization process and intelligently evaluates it's role in world development. He also includes some very interesting statistics on a variety of economic statuses of particular countries and corporations.

A superb brief introduction to a complex issue

Published by Thriftbooks.com User , 17 years ago
This truly is a dazzling brief introduction to a subject that could not be covered even by a very long book. As Steger points out, the fact of globalization is the predominant issue of our time. Far too man, as he points out, tend to treat the subject in monolithic or simplistic fashion, focusing on merely one aspect of globalization, and assuming that that aspect defines all of globalization. Anyone familiar with Thomas Friedman's THE LEXUS AND THE OLIVE TREE (who is frequently described as a "hyper globalizer") will recognize one such very narrow approach. Despite his brief space, Steger wants to do justice to the complexity of the subject. For the past decade, most writers on globalization have focused on economic globalization, but Steger emphasizes that the process has political, economic, religious, cultural, environmental, and ideological conditions. Many people who tackle the question of globalization seem to want to know, "Is this a good or bad thing?" Steger is anxious to emphasize that this does not admit of an easy answer. Clearly, the massive increase of economic inequality--which occurs both on international and national levels, e.g., wealth has more and more been concentrated in the industrial countries of the northern hemisphere, and within those countries, more and more in the hands of a small economic corporate and investing elite--is not a good thing, but that is not the only aspect of globalization. Steger seems to suggest that there are both significant advantages and some lamentable dangers in globalization. The one aspect of globalization concerning which Steger is clearly and rightfully concerned is the promotion of globalization in the ideological terms of the Neoliberal project of promoting free markets over all other concerns. The term "Neoliberal" might throw some people, since the leading Neoliberal of recent decades would include Ronald Reagan, Margaret Thatcher, and most members of the George W. Bush administration (though also many in the Clinton administration, including Clinton himself). Too many are unaware that Reagan and Bush are not conservatives by traditional understandings of the label: they both pushed for massive governmental intrusion into the markets, in taking an active role in eliminating regulation, and actively employing the government to control the economy, none of which are conservative projects. One reason that the Progressive movement gained so much steam during the McKinley, Roosevelt, and Wilson years was observing the extraordinary corruption and narrow concentration of wealth (and subsequent economic inequality) that resulted from an unregulated market economy. Steger, along with a host of others, points out that with the unfettered promotion of free market capitalism with little or no governmental regulatory control (Neoliberalism's big project) is once again resulting in extreme economic inequality. Numerous studies, to some of which he refers, have undermined one of the

Published by Thriftbooks.com User , 18 years ago
Manfred Steger does an excellent job summing up the most important subtopics within the vast and complex field of Globalization. He also provides an excellent bibliography for further reading. This tiny book is a great jumping-off point for those looking to delve deeper into the subject as well as a great overview for those simply interested in the major pluses and minuses of the world's greatest social trend.
Trustpilot
Copyright © 2022 Thriftbooks.com Terms of Use | Privacy Policy | Do Not Sell My Personal Information | Accessibility Statement
ThriftBooks® and the ThriftBooks® logo are registered trademarks of Thrift Books Global, LLC