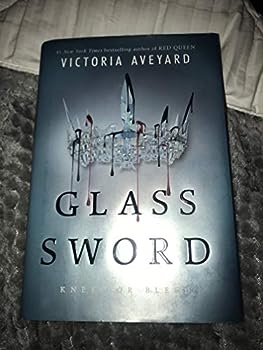 The #1 New York Times bestselling series. Perfect for fans of George R.R. Martin's Game of Thrones series, Glass Sword is the high-stakes followup to the #1 New York Times bestselling Red Queen. Mare Barrow's blood is red--the color of common folk--but her Silver ability, the power to control lightning, has turned her into a weapon that the royal court tries to control. The crown calls her an impossibility, a fake, but as she makes her escape from...

Book Is Written In What Language?

Published by Jade , 1 year ago
I loved this book! Not as much as the first one but its still a good book. I only put the book down on the slow parts but there were very few of them.

Glass Sword is a tragedy

Published by Thriftbooks.com User , 2 years ago
Any faith that I had in Aveyard as an author died in Glass Sword. Back in Red Queen, I had issues with the writing: Mare’s narration tended to be the cheating kind. First person point of view is very limited to only that single character’s head. Mare can’t possibly know the motivations behind characters’ decisions or actions without their telling her what they are. Mare knows without ever asking. The Maven twist came along and I settled back into enjoying the story. Aveyard used Mare’s confidence in reading people against her. Mare will learn from this experience and ask people what they are thinking and feeling more often, right? Nope. In Glass Sword, Mare continues to read people’s minds and be generally correct with no real fall out when she is wrong. It is much easier to create an emotionally intelligent character that can read people as easily as if the author is reading them for them (aka cheating) than it is to have that same character be flawed and grow from mistakes. The world building is flimsy for such a grand scale story. For instance, the fact that Farley charged Mare an insane amount of money to escape conscription rankled. I know that people who cross the American border from Mexico lose a lot in the journey. I can understand where Aveyard may be coming from with this. However, it was set up as though no one has ever escaped conscription before let alone asked for help in escaping. It stuck in my head. Jewish babies were smuggled out of Nazi Germany ghettos. Why isn’t there a system in place for the Red population? It’s eventually revealed that there are chunks of Reds living somewhat free from Silver rule within Norta. It was a nice surprise. This world building issue, however, continues into Glass Sword. Many other reviewers have spoken about this. We’re taken to different cities, but we don’t take the time to know them. Mare is brooding for the entire novel and can’t stand to give anyone her attention or trust. That included the newbloods that they spend most of the novel searching for and the towns that they visit. Yes, they may have found less newbloods if the characters took their time exploring the cities, and the suffering people within, but the story would have been significantly more satisfying. Characterization is also thin. No one in Red Queen seemed to have any interests or hobbies. What do they do outside of class? What do the kids in the royal court think about besides the crown? Cal got slightly more as the romantic lead. He builds motorcycles and reads a lot of books on war. Why not take the time to get to know Walsh even if she’s now lower in station than Mare? Or show Evangeline have an emotional range past rage or jealousy? What does Maven’s bedroom look like? And so on in Glass Sword. I mentioned before that Mare spent the novel brooding. Even though she can read everyone’s minds through slight body movements alone, she doesn’t actually know anything about any of the characters. She gets Shade back and immediately pushes him away. What was he doing when he was in the Choke? Not a clue. It eventually becomes a small joke amongst the characters. Mare didn’t notice something because she too busy being self-involved? LOL. It’s not a cute look, Aveyard. Change the point of views or change Mare. Instead, we get neither, and the story drags and drags yet manages not to give any real new information. I could go on for a while, but this review is long enough.

Published by Thriftbooks.com User , 2 years ago
Honestly the whole series is dark, but the main character starts to wrestle through her emotions and circumstances; which is causing her to lose that innocence you see in the first book. That being said, this is still an excellent story. I was surprised and I am very curious to see how things progress in the third book. Definitely worth the read

Published by Thriftbooks.com User , 4 years ago
I honestly don't know why this book gets such a bad rap. I really enjoyed this book, the same as the first book. It still kept me on my toes and the story line didn't become muddled or forgotten like a lot of sequels have a tendency to do. There were a couple of slow parts, but that is the case with any book. The slow parts still held crucial information for the story line.
Copyright © 2020 Thriftbooks.com Terms of Use | Privacy Policy | Do Not Sell My Personal Information | Accessibility Statement
ThriftBooks® and the ThriftBooks® logo are registered trademarks of Thrift Books Global, LLC