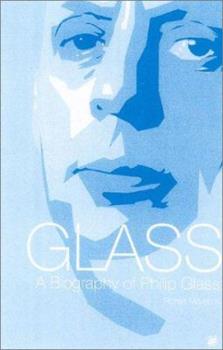 Glass: A Biography of Philip Glass

Written jointly as an appraisal of his work and a biography, Glass details the landmark points of Philip Glass's career and the artists he recorded with, explores his diverse projects and weighs up their impact on popular culture.

NOT REALLY A "BIOGRAPHY," BUT NEVERTHELESS QUITE INSIGHTFUL

Published by Thriftbooks.com User , 12 years ago
Philip Glass (born 1937) is a composer of "classical" music who has also achieved a measure of "popular" fame. Robert Maycock, an English music writer and critic, has written a fascinating the insightful portrait of him (the subheading on my copy of the book is "A Portrait," not "a Biography," and is a much more accurate description of the work). There are numerous biographical details that come out in the course of the book, but don't expect this to be a "composer's biography" in the Maynard Solomon sense. Glass first achieved recognition as a composer in the so-called "minimalist" tradition. Of his music from the "minimalist" period (e.g., Music in Twelve Parts, Two Pages: Contrary Motion - Music in Fifths), Maycock says, "The music of that period is essential Glass and is as far as some listeners have ever gone. What followed does not seem so different at first, but over the decades it has continued to evolve until it has reached a kind of music that is only distantly related, in the way that a great-grandchild might bear a family resemblance to the first generation. The attitude and the content change. So it follows that listening practices need to change, too." But Maycock notes importantly, "Of the composers who came to maturity in the age of minimalism, Glass has developed more than any, while remaining to some extent an outsider to mainstream traditions." Glass himself wrote, "The true minimalism was really over by the end of 'Music In Twelve Parts,' composed in 1974. If you look in the history books and the university curricula, they tend to write about those pieces because that's what they know. There's 25 years of music that they're missing." In the last 30 years (covered by this book, which was published in 2002), Glass has expanded his output, particularly exploring the symphonic genre, with mixed reviews: "Classical critics too did not like the Glass: Low Symphony, but that is a situation that crops up again and again with his work." Glass has also written film scores for movies like "Kundun," and his music was used in the movie "The Truman Show." Maycock writes, "it is a fact that Glass works a lot. He takes on projects when he is already busy, he accepts commissions that apparently distract him from his main artistic focus and ... he has composed a substantial body of orchestral music without ever intending to." For fans of Glass, or for those seeking a perceptive introduction to his work, this book is highly recommended.

Not really a biography, but a terrific reference book

Published by Thriftbooks.com User , 19 years ago
Finally there's a comprehensive book about Glass and his music, with a musicologist's approach.I think it's exactly the book that was needed, because, even if traces mr.Glass's biography in very broad strokes, the book is more of anan analysis of his music in its different forms.I think it's a terrific book because:1- It's by an independent writer, so no hagiography, but a very objective and interesting analysis, all the more valuable for that.For example, the author is not shy of talkingabout controversial issues, like the critics' attitude towards mr.Glass. (you know, those guys that sneer at his music because it doesnot conform to the standards they already have pre-set in their minds)2- The general tone is that of a vey well-researched and authoritative (if somewhat kinda too concise) book, aimed perhaps more to the informed listener than to the professional musician, which is just fine with me.It is, actually, a very readable book, especially enlightening when explaining Glass's musical evolution. It really gives you the idea of how and why the music has evolved the way it did.3- The descriptions of the pieces are great. They're justlike very well written but concise program notes, which isnothing less than what this marvelous music deserves.To give you an idea, it's so refreshing to read about the Low Symphony discussed in the same terms of a mainstream full-fledged classical symphony! (which is exactly what it is, in its peculiarly Glassian way)4- The writer had mr.Glass's endorsement, so there are a few illuminating interviews and, above all,tantalizing descriptions of the pieces that aren't yet recorded , like symphony 6, cello and piano concertos, because the author could listen to the composers' tapes from the performances.( as you will have gathered, this book is VERY up-to-date)By the way, are you guys at Nonesuch sleeping? Where the hell are those cd's?? Just reading mr. Maycock's enthusiastic description of the 6th symphony gave me a glance at what we're missing. I know corporate guys don't really care about the music, but hey, Glass SELLS!!A few minor quibbles: there are no photos and the chronological list of works that closes the book is a bit too concise ( usually in such lists you also get details like first performance, recordings etc.)Strongly recommended, nonetheless.
Trustpilot
Copyright © 2022 Thriftbooks.com Terms of Use | Privacy Policy | Do Not Sell My Personal Information | Accessibility Statement
ThriftBooks® and the ThriftBooks® logo are registered trademarks of Thrift Books Global, LLC