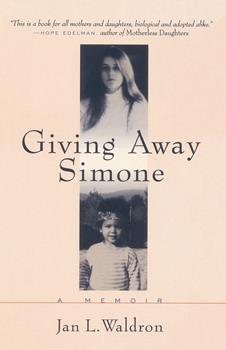 Giving Away Simone is Jan Waldron's account of her compelling, turbulent, and maddeningly original relationship with the daughter she gave away. Jan's baby, Simone, was the fifth generation of women in her family to be abandoned by their mothers. Determined to fight this "undertow of conditioned exiting, an affliction of easy farewell," Jan reunited with her daughter, now renamed Rebecca, when Rebecca was eleven. They spent the next thirteen years...

Published by Thriftbooks.com User , 13 years ago
Jan L Waldron's first book is her true story of giving up her first child for adoption. Her family history - 5 generations of women giving up or abandoning children - is incredible. She bares her soul in the telling of reconnecting with her birthdaughter. It is full of heartbreak and love as birthmother and daughter try to learn the whys and wherefores of the separation and the coming together. Highly recommend!

Published by Thriftbooks.com User , 19 years ago
I commend the author for her diligence in creating a relationship with her child. It is good reading for adoptive parents, particularly those involved in open adoption.

A must for those in open adoptions!

Published by Thriftbooks.com User , 21 years ago
This book is an essential read for birth and adoptive parents in open adoption, for those preparing to open an adoption and for anyone needing to learn more about relationship in adoption.Giving Away Simone is an insightful, painful and wonderfully well-written description of a reunion process. the reunion between Jan Waldron and her birth daughter Rebecca, takes years to become comfortable and the ups and downs, approaches and retreats of the relationship are incredibly well described. Although the first half of the book covers pre-reunion events, for me, as an adoptive mother, the heart of the book is the second half, which describes the evolving relationship between Jan and her daughter.There is an interesting twist to the title of this book. Giving away Simone appears to refer to Jan Waldron's placement of her baby for adoption. However, as Rebecca grows older and her loving but apparently increasingly busy adoptive parents seem to withdraw somewhat, it begins to feel as if this child is emotionally given away again,at least in part. This significantly affects the reunion process and the lessons for birth and adoptive parents are huge. For example, it becomes absolutely clear that open adoption is about relationships between FAMILIES and not just children and their two sets of mothers and fathers. Rebecca herself, now an adult and writer as well, writes a poignant and honest statement at the end of the book.As an adoptive mother, a student of adoption and a steady reader of adoption materials, this book is one of my top five adoption books, along with work by Betty Jean Lifton, Joyce Maguire Pavao and Patricia Martinez Dorner. It is packed with wisdom gathered from first-hand experience.

Published by Thriftbooks.com User , 24 years ago
This book was the most informative adoption related book that I have ever read. It gives so much insight into the birthmother's and the child's perspective on adoption. As an adoptive parent I found so many usefull pieces of information that I hope will help me to grow and learn with my children and their birthfamilies. Pages 156 & 157 of the paperback had especially useful and must read information.

Published by Thriftbooks.com User , 24 years ago
As an adoptive mother, I was forced to confront some unpleasant truths about myself by reading this powerful, disturbing book. I was initially appalled by Ms. Waldron's response to her daughter's return into her life. It astounded me that she would think it appropriate to try to parent a child who already had adoptive parents (with whom she was very happy), let alone to criticize the parenting her child had received. Gradually I realized that this attitude was not a "right" that Ms. Waldron was asserting ('she's my child too!') but a responsibility that she would much rather have abdicated, but could not in good conscience avoid. To establish an honest bond with Rebecca (the "Simone" of the title), her birthmother had to treat her as her child, not as a privileged guest or--worse (the trap I would fall into, I suspect!)--a victim to whom she owed some sort of reparations. This is an insight for which I am grateful, and one which all adoptive parents should have. I was bothered throughout the book by the lack of attention given to the birthfather. I understand if Ms. Waldron feels she cannot tell his story, or if she doesn't know his story, but I really wanted to know what Rebecca thought about his continuing absence, particularly since he was black and she, as a biracial woman, is perceived as black. Waldron criticizes her daugheter's upbringing in an all-white neighborhood where she was allowed to be "exotic"--never good preparation for the reality of being black in America--but never discusses any alternative. Since she saw the child regularly from the age of 11, I just wondered if she had tried to introduce her to a wider or more diverse group of friends. There is no doubt that "Giving Away Simone" is required reading for everyone in the adoption triangle. I hope that more birthparents come forward and tell their stories; as adoptive parents, we need to be reminded of their perspective and helped along in the wonderful, daunting task of raising adopted children.
Trustpilot
Copyright © 2022 Thriftbooks.com Terms of Use | Privacy Policy | Do Not Sell or Share My Personal Information | Accessibility Statement
ThriftBooks® and the ThriftBooks® logo are registered trademarks of Thrift Books Global, LLC