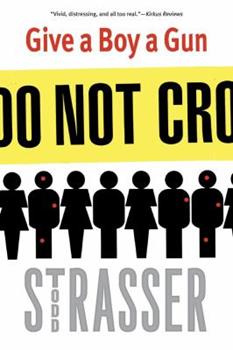 Give a Boy a Gun

Featuring a new trim size and a new line look, Todd Strasser's acclaimed account of school violence that Kirkus Reviews calls "vivid, distressing, and all too real." For as long as they can remember, Brendan and Gary have been mercilessly teased and harassed by the jocks who rule Middletown High. But not anymore. Stealing a small arsenal of guns from a neighbor, they take their classmates hostage at a school dance. In the panic of this desperate situation,...

Richie's Picks: GIVE A BOY A GUN

Published by Thriftbooks.com User , 18 years ago
I painfully recall those couple of years in my early adolescence when I really got pushed around a lot. For me it was junior high in the late 60's when I'd be constantly harassed by older or bigger kids. Walk down the hall or down the stairs and get tripped or shoved into a locker or have your books slammed out of your arms sending your papers flying everywhere. Sit on the school bus and be whacked with a book by a passerby or have your hat snatched. Occasionally I remember an even bigger kid coming along and asserting his dominance over the bully who was picking on me -- yep, that was me, the bottom of the food chain--but usually these incidents became solitary, painful memories of the time when I was a good, quiet student treading water in a sea of raging hormones. I cannot recall ever having the urge to exact revenge (beyond a hand gesture). But, then again, it was a time that, in retrospect, seemed to pass soon enough as I came into my own in high school. But what would I have been like if I'd had to endure year after year of such torture through high school as well as junior high? In GIVE A BOY A GUN by Todd Strasser, we meet two teenage boys who, after enduring years of torture by their school's most popular students, do take revenge. In a fictional account which recalls real-life school shootings in Littleton (CO), Jonesboro (AK), and Springfield (OR), the two teens take a group of students and teachers hostage at a dance in the high school gymnasium. Strasser presents the story in the form of quotes by the teens (Brendan Lawlor and Gary Searle) as well as their friends, their tormentors and other schoolmates, current and former teachers, their parents and neighbors. At the foot of many pages the author provides us with facts concerning gun availability, violence and manufacture as well as quotes relating to those tragic real episodes which have been occurring in schools across America. (Information Strasser has compiled includes the federal estimate that there are roughly 250 million people and 240 million firearms in America, that 12 percent of students say they know another student who has brought a gun to school, and that in 1996 there were more than 6,000 American students expelled for bringing a gun to school.) In the story we learn how the physical and verbal abuse heaped daily upon the two teens by popular football players and the in-crowd is tolerated by the faculty. We meet teachers who, themselves, treat the unpopular kids as outcasts in the classroom. As Allison Findley (Gary's girlfriend) points out: "If Deirdre Bunsun is talking in world history, it's like 'Excuse me, Deirdre, now pay attention.' But if Allison Findley is talking, Ms. Arnold stops the class and stares at her. And then the rest of the kids stare at her. It's a light slap on the wrist for Dierdre, it's public humiliation for Allison." We come to understand how Brendan, Gary, and their little circle of friends seek to escape from unremitting daily reinforcement

Published by Thriftbooks.com User , 21 years ago
What an excellent book. Mr. Strasser takes you into the minds and lives of the realistic characters in his book. Not only does he do this, but he cites real information, quotes, and stats throughout the book. At the end of the book, he gives a timeline of a history of school shootings (like in the book) as well as a bibliography of other material to read on this subject matter. PLUS-a portion of the profits from the book are being donated to organizations dedicated to the struggle for gun control. Need I say more? Thank you for an excellent book that will get it's readers thinking.

Published by Thriftbooks.com User , 21 years ago
Good fiction encourages the reader to think hard about the issues that affect our lives. The very best fiction does that and more - it encourages us to act on those issues. In this powerful, honest, and disturbing novel about guns and school violence, Todd Strasser gives voice to the victims, classmates, neighbors, parents, and students who held the guns - both fictional and real - and asks the reader what he can do to make a difference. Strasser goes beyond just the issue of gun control by presenting a compelling look at the intolerance that pervades our schools. He implores our educators and children to celebrate the differences that make us human, to value accomplishments beyond those on the athletic fields, and to recognize that marching to a different drummer is not cause for ridicule. I applaud Strasser, a fiction author, who uses his craft and his gift to encourage readers to be part of the solution to violence that is unnecessarily costing young lives.

A shocking work of fiction

Published by Thriftbooks.com User , 21 years ago
When I started reading the book, I was amazed to discover that it was not a non fiction book. The style and wording of the author makes the book extremely plausible, and the fact that it is based on true occurences adds to that. In "Give a Boy a Gun", Todd Strasser tells the story of two boys who hold their school hostage during a dance. The reason: revenge on the football players and teachers. The book is written from the view points of friends and family, school staff, e-mails between the gunmen and chatroom conversations between the gunmen and their friends. At the bottom of most every page are facts about violence and shootings. At the back of the book is a section about violent shootings and occurences that happened while the book was being written, and another brief section of certin school shootings.

Give a boy a gun

Published by Thriftbooks.com User , 21 years ago
Taking today's headlines and combining them with fictional faces and more than enough quotes and statistics to terrify his readers, Todd Strasser presents his newest YA novel, Give A Boy A Gun (2000). The novel is a combination of statements given by witnesses to a well thought out gun attack by 2 teens against their peers and teachers at a school dance. The book is similar to Making up Megaboy (Virginia Walter, 1998) in that the story is presented from multiple perspectives versus narrative form. But unlike Megaboy, this book takes you inside the lives of its killers and gives their rationale for their actions as well as their intimate suicide letters. This is an incredibly well researched and thought out book. It will definitely raise the eyebrows of many parents because of its violence level and subject matter. It was written for YA's and will make them think long and hard about gun control, but I feel that librarians and teachers alike would be remiss if they did not read it for themselves. Includes further sources for information. Partial proceeds from the book will go to gun control charities. Highly recommended for older teens and adults. Not for the weak of stomach. A definite best book candidate. Controversy will follow this book wherever it goes.
Copyright © 2020 Thriftbooks.com Terms of Use | Privacy Policy | Do Not Sell My Personal Information | Accessibility Statement
ThriftBooks® and the ThriftBooks® logo are registered trademarks of Thrift Books Global, LLC