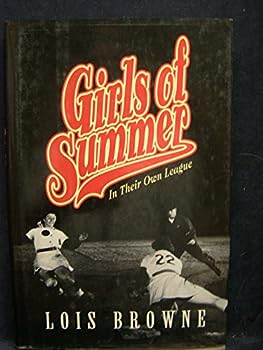 Girls of Summer: In Their Own League

The backdrop for the hit film, A League of Their Own - directed by Penny Marshall and starring Geena Davis, Tom Hanks, and Madonna - Girls of Summer is the true-life story of the All-American Girls Professional Baseball League that flourished in the 40s in the Midwest.

Published by Thriftbooks.com User , 14 years ago
I must admit I don't consider this the best book on the All-American Girls Professional Baseball League ("When Women Played Hardball" gets the nod), but "Girls of Summer" is probably the best stright-up history of the AAGBPL. While "When Women Played Hardball" is a very personal book that does a better job of giving you the inside story of the AAGPBL via the league championship series from one season in the early 50's, "Girls of Summer" takes a more clinical approach from a beginning-to-end perspective. You don't get to know the players as well, but you understand the league better. It's very well-written, doesn't linger too long on any one topic, and you feel you've learned something when you're done reading it. If you liked watching "A League of Their Own," you'll like this...and there'll be no doubt who Madonna's character was fashioned after. If anything, "All-The-Way May" is tame in comparison. There have been other somewhat similar books published on the AAGPBL, but this is the best history. I'd recommend reading "Girls of Summer" first, then try "When Women Played Hardball" if you want something a little more in-depth and character-driven, so to speak.
Trustpilot
Copyright © 2022 Thriftbooks.com Terms of Use | Privacy Policy | Do Not Sell or Share My Personal Information | Accessibility Statement
ThriftBooks® and the ThriftBooks® logo are registered trademarks of Thrift Books Global, LLC