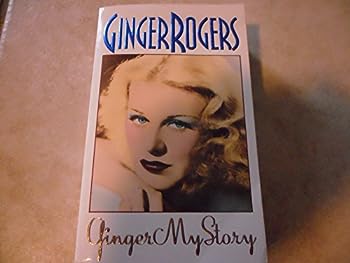 The long-awaited autobiography from one of Hollywood's greatest stars. From the time she made her vaudeville debut at age 17, Ginger Rogers was destined to be a star. Now 73 films, hundreds of stage shows, and an Academy Award later, she tells the story of her fascinating life. 16 pages of photographs.

If you love Ginger Roger's and classic movie musicals then this is the book for you!!

Published by Yolanda , 1 year ago
Movie musical fans and Ginger Roger's fans will LOVE it!!! It's full of Ginger!

In Her Own Words

Published by Thriftbooks.com User , 12 years ago
I found this book to be delightful. I'm not taken aback by the use of the first person pronoun, or the comments on Christian Science, or her bursts of enthusiasm that come through from many years ago. In fact, they enhance understanding of this ebullient and hard-working personality. She's open about her flaws and imperfections...and in fact, seems eager to communicate them to the public....who, seeing her in more than a few transcendentally beautiful films, had come to expect the same from her in person. She demonstrates her down-home humanity and her joy of life many times over...even as she attempts to set the record straight, on all the so many erroneous things, that were said about her over the years. She's quiet on certain (but not all) personal things...i.e., between husband and wife....and I'm glad she had the good taste NOT to let us in on the things that are none of our business. She was more of a private person...like Fred...than many would have supposed. She was active socially at different parts of her life, but always preferred the small gathering, or the small party, with friends. Some viewed her as an "ultra-conservative". But here too, she sets the record straight. She only supported her mother's right to speak out regarding her opinions on left influence of some Hollywood script writers. It should be noted however, that this was at the very moment when the theft of American atom bomb secrets led to an exact copy, being detonated by Mr. Stalin. Compare Ginger's "sin" to Kate Hepburn's melodramatic and simplistic "I am a communist" speech in their support. Which was worse? She wasn't so "ultra-conservative" not to have met and admired Democrats FDR, Elinor Roosevelt, Harry Truman (who had a day for her in Independence, Missouri), and Jimmy Carter. She wasn't so "ultra-conservative" to have broken her engagement with a cheating Howard Hughes, and turned away from a life of wealth and luxury. She wasn't so "ultra-conservative" not to have married a pacifist, and to have considered as her favorite film, Hollywood's first anti-war movie: "All Quiet on the Western Front", starring her future husband Lew Ayres. She wasn't so "ultra conservative" not to have been a fighter for her own rights, and the rights of actresses. And in fact, it should be noted that her friend and colleague, Ronald Reagan, with whom, in 1950, she did the anti Klu Klux Klan film "Storm Warning", helped to end the cold war, with Mickhail Gorbachev...whom HE befriended. Underlying her great talent, charm, personality, versatility, and good looks, she had a strength of character, which earned her every bit of her many accolades. Yes, she admittedly and not surprisingly, also made mistakes, both professional and personal...but...and this is key to understanding her...bounced back every time. She didn't live in a dream world of her brilliant past career...but lived in the moment...even if that moment was not up to her highest past standards...as is almost always

Published by Thriftbooks.com User , 14 years ago
Not being an avid "autobiography" reader, I must say I thoroughly enjoyed this book. I can honestly say that even if you aren't a reader you will like this book. It has surprises out of nowhere & it's enjoyable. I'd recommend this book to anyone.

One of the Best Books I've Ever Read

Published by Thriftbooks.com User , 18 years ago
I am a great fan of Fred Astaire and Ginger Rogers. When I learned that she had written an autobiography, I wanted to read it right away. This book was so good and informative, that I read all 450 pages within a few days. In her book, she talks about her childhood, her devotion to her mother, Lela, her stage career, her romances, and her movie career. I reccomend this book to any Ginger Rogers or Astaire and Rogers fan.

Ginger's memoir is truly a delight!

Published by Thriftbooks.com User , 19 years ago
According to one writer and critic 'Ginger my story' was greeted with 'critical yawns' upon it's publication in 1991. Personally I couldn't disagree more. Reading this book was a truly heartwarming experience from beggining to end. Ginger writes candidly about her upbringing, her early experiences on the vaudeville circuit, her hollywood film career (including the pitfalls of being a woman in Hollywood) and the sad story of her five marriages which all ended in divorce. Ginger tells delightful anecdotes about her encounters with other famous folk - George Gershwin, FDR, Cary Grant, Katharine Hepburn, Noel Coward, Judy Garland, Frank Sinatra etc. It is wonderful to know how devoted she was to her mother Lela (to whom the book is dedicated) and the chapter where she describes how she coped with Lela's death is truly poignant. The most interesting parts for me was where she describes how christian science had helped her through life and how she had had used it to help others (she cured her third husband of warts and her fourth husband of boils!). I did feel quite sad though reading this knowing that Ginger was no longer with us (it's a shame she couldn't have used christian science to save herself from diabetes;she died from the disease in April 1995) for I would surely have written to her congratulating her for having written such a wonderful memoir.

Published by Thriftbooks.com User , 20 years ago
This is my favorite book! Sweet, funny, sober, honest Ginger Rogers gives us a peek into yet another one of her many talents--writing. Her autobiography reads well, in fact, it is the only biography I could ever finish, let alone read multiple times. It gives a detailed (but not at all dull) look into her life in show business, FIVE husbands, her religion, and of course, her mother. Illustrated with lots of lovely pictures of Ginger and many of leading men, Fred Astaire, Cary Grant, Jimmy Stewart, et cetera. Beautiful book, a must read.
Copyright © 2020 Thriftbooks.com Terms of Use | Privacy Policy | Do Not Sell My Personal Information | Accessibility Statement
ThriftBooks® and the ThriftBooks® logo are registered trademarks of Thrift Books Global, LLC