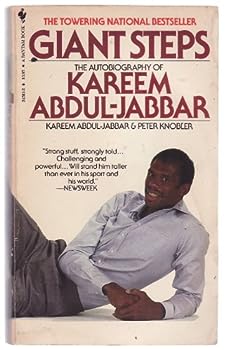 Giant Steps: The Autobiography Of Kareem Abdul-JabbarHARDCOVER This description may be from another edition of this product.

Take a closer look at a private man

Published by Thriftbooks.com User , 15 years ago
Giant Steps is an auto-biography of Kareem's first 30-35 years. A lot of people know Kareem as a sullen and bitter man and with good reason. But after reading his perceptions on his own life, you start to get an idea of what shaped Kareem and made him the man he was and how it shaped the man he is today. Raised in NYC, he was always a hoops phenom, always the tallest kid around, and after a few years, he became acutely aware of his blackness. A high school coach spitting a racial slur at him for "motivation" and a bus ride to racially insensitive North Carolina opened Kareem's (at the time his name was Lew Alcindor) eyes to racial inequality. He developed a keen interest in Islam (Kareem mentions the differences between the Islam he believes versus the Nation of Islam that Muhammad Ali believes in--very interesting take on this) and his own race. After high school, it was on to sunny California and UCLA to play for John Wooden. The UCLA campus, chock full of white folks and scholars, was a bit different from the jazz joints he'd be hanging out at in Harlem. From the US's two greatest cultural epicenters to Milwaukee? From the year-round paradise-like weather of LA to the frigid temps of Wisconsin? From the shelter of John Wooden's hoops program to the spotlight of the NBA and its aggressive media? Life can't change a lot more than that. And Kareem definitely had his difficulties, which he addresses and doesn't attempt to excuse. You can feel Kareem's edge throughout the majority of the bio. The unforgiving chip on his shoulder weighs heavy on him, and after reading and understanding what pushed a bit more you can begin to sympathize with his personal struggles. Near the bio's end you can literally feel weight sliding off of him. It's slow, it's gradual, and it's not complete, but it's the start of something. The "Giant Steps" title can refer to a lot of things in Kareem's life, New York to LA, LA to Milwaukee, college hoops to pro hoops, Wilt Chamberlain's friend to Wilt's enemy/competitor, but I believe the biggest steps Kareem takes are the steps toward acceptance of himself and others. A companion book to Giant Steps is "Kareem". "Kareem" is a bio/diary Jabbar kept during his final season in the NBA. The second book picks up right where "Giant Steps" left off. His remarkable growth after his 35th birthday is clear to the most unobservant reader. Kareem and his co-author clearly express his development in rich language. This isn't just for hoops fans. "Giant Steps" is for anyone curious about race relations in America. Anyone curious about what it means to be truly different (7'1" black Muslim/basketball player in America in the 60s-80s--not too many of them around) and be forced to feel those differences every second of your waking life should take a look. "Giant Steps" shows an angry, but passionate young man develop into a thoughtful, (somewhat) outgoing adult capable of contributing much of what he's learne

Published by Thriftbooks.com User , 16 years ago
The only thing bigger than the chip on Mr. Abdul-Jabbar's shoulder in this text is the grand and engaging story he tells. For fans or just the curious observer (as I was), he takes us on an insightful journey into his motivation, his doubts, his difficulties, and his dreams. It sometimes seems that the persona behind the person is revealed more to the reader than to the writer.

A NICE READ FROM SPECIAL K

Published by Thriftbooks.com User , 17 years ago
KAREEM TELLS OF HIS LIFE GROWING UP IN NEW YORK IN GREAT DETAIL IN THIS BOOK. BUT I THINK HE SHOULD HAVE TOLD US MORE ABOUT HIS PLAYING DAYS AT UCLA, MILWAUKEE AND LOS ANGELES. THIS HAS A LOT OF GOOD STUFF LIKE HIS FIRST MEETING WITH WILT, HIS TEAMMATES AT UCLA, AND HIS RELATIONSHIP WITH CHERYL PISTANO. I REALLY FOUND HIS BUDDAHISM AND ALL THE PEOPLE INVOLVED TO BE VERY WEIRD AND UNINTERESTING. KAREEM IS AN INTELLIGENT GUY WHO ENJOYS THE MATERIAL AND SPIRITUAL THINGS IN LIFE. HIS PIECE AT THE TIME CHERYL PISTANO, HELPED HIM TO BE MORE OUTGOING AND CORDIAL TO PEOPLE AND HELPED OPEN HIS LIFE MORE. JUST WISHED HE WOULD HAVE BEEN MORE DETAILED ABOUT HIS SEASON TO SEASON CAREER AT UCLA AND THE NBA. A GOOD READ.
Trustpilot
Copyright © 2022 Thriftbooks.com Terms of Use | Privacy Policy | Do Not Sell or Share My Personal Information | Accessibility Statement
ThriftBooks® and the ThriftBooks® logo are registered trademarks of Thrift Books Global, LLC