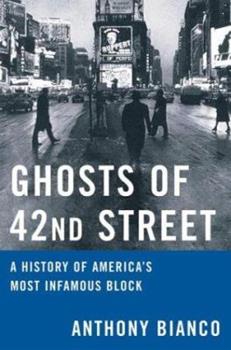 Ghosts of 42nd Street: A History of America's Most Infamous Block

Anthony Bianco's Ghosts of 42nd Street is the dramatic and definitive story of this legendary strip, told through the people involved in its founding and its current renaissance -- from the bosses of the world's top media companies to premier property developers to the city's powerful political interests to the small-business proprietors, drug dealers, pimps, pornographers, and slumlords who have all called it home. Larger-than-life characters such...

Published by Thriftbooks.com User , 16 years ago
Anthony Bianco describes the history of Times Square from its first theater in 1904 to the present day. He walks us through the era of vaudeville and burlesque, introduces us to memorable characters such as Diamond Jim Brady and (much later) Marty Hodas the porn entrepreneur, all the way through to the redevelopment of the 1990s. The theme of Bianco's book is that even at its height, Times Square was seedy and disreputable. For a theater to show a Shakepearean play had always been the exception rather than the norm. The neighborhood has always been a center for prostitution of all kinds, and the theaters have always been testing the limits of what society considers decent. Any stage show was successful in proportion to the amount of skin exposed. When movies took over, the theaters of Times Square showed second-rate action movies (known as "grind theaters") while the more highbrow movies opened elsewhere in the city. In short, the Times Square of today is more respectable than it had ever been at any point in its history. My complaint about the book is that there are no maps and only 33 period b & w photos, which are not nearly enough. Much of the book describes particular buildings in great detail without a single illustration of those buildings. The reader is expected to know that the 200 block of 42nd Street is the historic heart of the theater district and that the 300 block has always been beyond the beaten path. Detailed maps would have improved this book enormously.

THE book to read about 42nd Street

Published by Thriftbooks.com User , 17 years ago
42nd Street's spectacular renaissance has unleashed a torrent of recent books chronicling the thoroughfare's rise, fall and re-birth. One of these, "Down 42nd Street," was a huge disappointment, littered with factual inaccuracies and nearly incoherent in its recounting of the epic 1990s re-development saga. (See my March 30, 2002 review of this book for specifics.) Anthony Bianco's "Ghosts of 42nd Street" suffers from no such shortcomings. Indeed, one of this book's central strengths is its detailed "insider's" account of the street's 1990s metamorphosis. Rebecca Robertson is depicted as a genuine heroine, envisioning earlier than most - certainly before anyone in the government bureaucracy - that the rehabilitation of the turn-of-the-century theaters would be the linchpin in restoring 42nd Street's luster. Robertson was prescient in foreseeing that office development would follow the theaters' revival. 42nd Street has always been filled with characters and we meet many of them. For example, there's Marty Hodas, a struggling 1960s entrepreneur who emerges as "The King of Peeps," before running afoul of federal tax laws. Then there's Seymour Durst, the obstreperous developer who waged a clever campaign to block re-development, but whose family would build the first new office tower. There's a lot of interesting New York City history here as well. We learn, for example, that the financier August Belmont was the catalyst behind changing the name Long Acre Square to Times Square. The New York Times publisher Adolph Ochs ostensibly had nothing to do with it, though it was Ochs himself who conceived the New Year's Eve ball dropping festivities in 1906. There's also a vivid account of the demise of legendary architect, bon vivant and habitual lady's-man Sanford White at the hands of a jealous husband. If you read only one book about 42nd Street, this is certainly the one.

Published by Thriftbooks.com User , 17 years ago
Let me get my one complaint out of the way. This book should be titled, "Ghosts of WEST 42nd Street" because it just about completely ignores 42nd Street east of 6th Avenue.That said, Anthony Bianco's "Ghosts of 42nd Street: A History of America's Most Infamous Block" is a welcome departure from the spate of books about 42nd Street that seem to come out at a rate of one a month. Mr. Bianco's approach is all-encompassing, not just focusing on the crime or the theater, the squalor or the glamour. There is an encyclopedic amount of information here, as he spans the decades. And yet, the book is very compressed and easy to get through. Mr. Bianco's writing is very fluid.The cast of characters is familiar, as are many of the anecdotes. However, there are plenty of tales that will surprise the reader, even one that is very familiar with the history of this piece of midtown real estate. Pick up a copy and you will enjoy.
Copyright © 2020 Thriftbooks.com Terms of Use | Privacy Policy | Do Not Sell My Personal Information | Accessibility Statement
ThriftBooks® and the ThriftBooks® logo are registered trademarks of Thrift Books Global, LLC