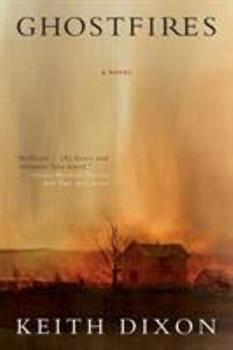 One man believes Linda Bascomb was murdered. A second believes she took her own life. The first is her husband, Warren, an aging surgeon who has lost his medical license because of his morphine addiction. The second is her son, Ben, a husband and father who struggles every day to remain sober and avoid bankruptcy. Warren has entered into an arrangement with his son that has since kept Ben financially afloat and Warren supplied with morphine. Ben's...

Published by Thriftbooks.com User , 17 years ago
Keith Dixon tackles the subjects of personal addiction, guilt and familial relations reminiscent of Hemmingway in its stark, unrelenting style. Ghostfires gives the impression that it's about the painful legacies passed down among the Bascomb men for three generations (and it is that). While that alone makes it a worthwhile read, it's reflecting on the secondar characters in the novel that make it an enduring experience. At the end, none of Dixon's characters are free from their own demons, or free from the fallout associated with their relationships with the Bascomb men. Hauntingly realistic, Ghostfires draws its strength from a near-clinical attention to the truth that leaves the biggest questions unanswered, characters unfulfilled and sense of closure unsatisfactory.

Quite an Impressive Debut

Published by Thriftbooks.com User , 17 years ago
Ghostfires is a magical novel. There are points that could sometimes be seen as hard to swallow, but these are quickly overcome by the sheer thematic power and the crispness of Dixon's prose. Fiction in its highest form strives for truth. It allows the characters to stand on their own and play out their actions in a world that is more than a clever artifice. For me, as a reader and also a writer, fiction also makes me want to sometimes scream at the characters when they do something totally inane, to praise them when their actions merit. Good fiction embeds me with the characters' happiness, their hopeful strainings, and, in this work's case, their almost insurmountable pain. In his first novel, Dixon achieves so much that it would take more words than this meager review allows. Let me just say that it is rare that a writer appears full blown and unflinching and so seemingly sure of his abilities. I look forward to anything Mr Dixon chooses to write.

"Peace is what we're trying to find now, the three of us"

Published by Thriftbooks.com User , 18 years ago
Readers may end up enjoying this dark, somber and depressing story, but only if they get over their disbelief at the initial unlikely scenario. Ghostfires is a competently written, part thriller, part relationship drama, but none of it seems to be even remotely realistic. Are we really supposed to believe that a young man is actually helping his elderly father to traffic drugs, while at the same time struggling with his own alcoholism? And are we also supposed believe that the relationship between father and son is actually that nasty, malicious and vicious? If you can ignore this implausible set-up, you'll find that Dixon has written an uncanny novel that explores with unusual candor the nature of addiction, the perils of bottling up family secrets, and the dysfunctional ties that bind relatives together.Warren Bascombe has agreed to keep his son Ben financially liquid, but only if Ben works as "a driver" for Victor Javier while keeping Warren supplied with morphine. Ben's wife Emma wants him to stop, and to distance himself from Warren before the situation destroys her family. But Victor seeks to keep the drug trafficking going so that he can make life better for his mother. Haunting their lives is the ghost of Warren's father who was once killed in a house fire, and whose death remains a powerful barrier between Warren and Ben. As accusations fly and secrets are revealed, both Ben and Warren begin to embark on a downward spiral of addiction and self-destruction. Warren is the central focus of the story. He's a pathetic character exiled from his profession as an orthopedic surgeon after making a terrible mistake when high on Dilaudid. Riddled with the pain and bitterness of life - he believes that his son, Ben unnecessarily hastened his wife, Linda's death from cancer - and now racked with addiction, he reflects that his life is similar in structure and schedule to that of an incontinent. He shoots up in public restrooms and crawls out, a "recast man, a furloughed junky, only slightly filthier for the journey."Poor Ben, losing money, fighting with drink, finds solace in prescription medicine "where three years of sobriety have been obliterated in an instant." Heading towards bankruptcy, he's desperate to turn things around and has an emotional dread at what lays ahead. For Ben, is unable to handle the pressures of modern life, he sees life without alcohol "as just life. It's a soul-killing white noise". Ben ruminates "that was how life worked. Time turned things around; eventually you swapped roles because that was how life went - first you comprised a little. Then you compromised a lot."Emma is disillusioned, bitter and desperate to hang on to her failing marriage to Ben. She's concerned about his drinking, but is unable to stop his downward spiral to self-destruction. For her, romance and intimacy in its truly physical manifestation has become peripheral, and she feels sad and begins to fear their uneasy acceptance that a friendly, nearly pa

Wrenching -- but in a good way

Published by Thriftbooks.com User , 18 years ago
"Ghostfires" is not an easy read, with its complicated relationships, violence, and overall darkness. But the power of the writing propels the reader forward, even through the wrenching interactions among well-drawn characters. The admiring professional reviews are to be heeded.

An Impressive Debut from a Promising Writer

Published by Thriftbooks.com User , 18 years ago
There is an uncharted territory of the heart, mind and spirit that is a geographical locus as well. We could call it, generally, the outskirts of New York City, neither quite urban nor entirely rural, influenced adversely by the qualities of both. It is into this setting that Keith Dixon, an editor for the New York Times, brings his debut novel GHOSTFIRES, laying bare the extremes of the borders of the complicated relationship between fathers and sons.The father and son of this novel are Warren and Ben Bascomb, respectively. As GHOSTFIRES opens, the center of their quiet but long-simmering dispute revolves around an act that Ben regarded as a final act of mercy for his terminally ill mother, but that Warren considered to be murder. The father and son relationship, always uneasy, became further unraveled when Warren's medical license was suspended five years previous to the events of GHOSTFIRES due to his addiction to Dilaudid. He subsequently entered into an uneasy, roiling pact with his son, a clandestine arrangement that has kept Ben financially afloat subsequent to a business failure while keeping Warren supplied with the drugs that have enslaved and ruined him.While the pact brought an abrupt end to their external hostilities, their mutual anger continues to simultaneously consume both men from within. Father and son each despise the other for providing them with what they feel they need: a tenuous financial security for Ben, and the temporary satiation of addiction for Warren. It is this dichotomy that drives GHOSTFIRES.Dixon, however, infuses this fine third-person narrative from the first page with the implied foreknowledge that the arrangement cannot successfully continue for long. Ben may be a drug mule, but he does not have the personality for it. The people he is dealing with are way out of his league. These include the enigmatic Victor, for whom every deed, even those that might in some way be described as charitable, is extracted only at great price. Warren, meanwhile, is driven entirely by his addiction. His all-consuming desire for drugs both sustains and threatens the arrangement that keeps him supplied and his son marginally solvent. Ben, meanwhile, is on the verge of losing his family. His desperate actions drive his wife Emma back to the home of her parents, where quiet but dangerous insanity reigns.As the reader gradually learns the motivations behind all of the parties involved, and the history that has brought them to where they are, Ben and Warren move steadfastly toward an apocalypse that will result in a bad ending for one and a bizarre, partial redemption for the other.While GHOSTFIRES is Dixon's first novel, he remains sure-footed from first page to last, turning over the rocks of the father-son relationship and revealing the quiet, coiled, and dangerous snakes beneath. Reminiscent of some heretofore unknown collaboration between John Barth and George V. Higgins, GHOSTFIRES is not so much a crime novel as a character st
Trustpilot
Copyright © 2022 Thriftbooks.com Terms of Use | Privacy Policy | Do Not Sell or Share My Personal Information | Accessibility Statement
ThriftBooks® and the ThriftBooks® logo are registered trademarks of Thrift Books Global, LLC