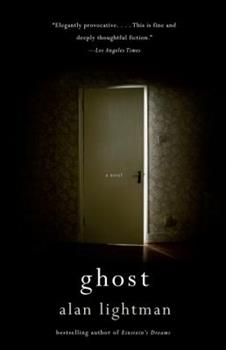 A stunning new novel about an ordinary man's encounter with the extraordinary, from the author of Einstein's Dreams .David Kurzweil, a quiet man with modest ambitions, was taking a break at his new job, when he saw something out of the corner of his eye. Something no science could explain. Suddenly David's life is changed, and he soon finds himself in the middle of a wild public controversy over the existence of the supernatural. As David searches...

Published by Thriftbooks.com User , 13 years ago
This book is written with lyrical prose reminiscent of Alice Hoffman's finest works. It isn't so much a suspense tale, or even a solid ghost story. It is about a man who experiences a phenomenon that he cannot fully define. He sees something that isn't thoroughly described - he isn't sure what he really saw. When the story gets out that he saw something that may have been a spirit in the funeral home where he works, his life is thrown into complete upheaval. His mother, who is already a bit cold and self-centered, rejects his experience. His ex-wife, who is equally cold hearted, decided to show up, sending his life into further upheaval. I won't say more as I don't want to ruin the story. This author has created a flawed character you come to care for. You agonize over the upheaval in his life. You hope, throughout the story, that he will end up with a happier life than the one he is leading. He becomes human in your mind. That is the mark of a story well told. I highly recommend this book.

Published by Thriftbooks.com User , 13 years ago
In his powerful novel, Ghost, Alan Lightman leads his readers on an exploration of the border between two modes of perception--the scientific and the mystical. The result is a lyrical narrative of one man's journey from a state of paralysis into greater self knowledge and an increased capacity of connection to the social and material world in which he lives. Lightman expands his reader's concept of what constitutes reality in his refusal to exile the mystical from the world of human experience. In taking a job at a funeral home, his protagonist, a man adept with numbers and committed to understanding important truths, discovers an ambiguous and ambivalent borderland in which mystical and material realities merge. After experiencing an enigmatic glimpse of the paranormal, Lightman's hero faces pressure from those dedicated to the causes of science and mysticism to overstate his assessment of the encounter. Lightman, an MIT professor with degrees in both science and writing, uses his character's dilemma to question the human tendency to insist upon certainties where none exist. Ultimately, he suggests that, in doing so, we limit our understanding rather than increase it. Indeed, Lightman's novel also offers interesting insight into the divide in American culture between materialists and those whose sense of reality makes room for the mystical. In particular, he manages to convey an important aspect of modern university life that contradicts the stereotype of the intelligentsia as hostile to religion. At one point, Lightman's hero finds himself at the center of a committee debate between the science and humanities faculty at a local university. Here, Lightman delineates the two camps into which many campuses divide, with science faculty insisting that the university discount and dismiss the ghostly encounter, while the spokesman for the humanities makes the case for the mystical as belonging to an important mode of perception informing the way those working in the humanities perceive the world. In pressuring Lightman's hero to deny his experience, the forces dedicated to materialism cause him to analyze his own relationship to his memories and his understanding of his past. While we might expect such a growing sense of uncertainty to increase his protagonist's paralysis, Lightman has the reverse happen. Thus his hero's more fluid sense of self enables him to take emotional risks that deepen his satisfaction with his relationships and his life. I highly recommend Lightman's novel and I look forward to reading this author's other works.

Elegantly traverses the shadowy boundary between faith and reason, belief and science

Published by Thriftbooks.com User , 14 years ago
David Kurzweil is a middling man. He is middle-aged and a former middle manager who has lost his job at a large bank and soon finds himself working as an assistant at a family-owned funeral home. Although bright and intellectually curious (he reads Hume and Descartes and attended law school for one semester), he is content to live a tranquil life in a modest, all-male apartment building, sharing quiet evenings at home and walking around a lake with his librarian girlfriend. But what happens to him one afternoon in the funeral home's slumber room --- when he believes he sees "vapor [come] out of a dead body" --- changes his life irrevocably and serves as the springboard for this thoughtful and affecting novel. At first David is reluctant to embrace the import of his experience: "He believes that something has happened to him, but he doesn't know what it is, and he wants to explore it slowly and gingerly, like an ambiguous but riveting smile in the distance." When reports of the sighting inevitably leak to the press, he is besieged by desperate people who believe he has supernatural powers and want him to communicate with their deceased relatives and friends. Soon David is approached by an organization known as the Society for the Second World, whose leaders think they have found an appealing Everyman to popularize their beliefs. Eventually they persuade him to submit to testing by a Dr. Tettlebeim, using a Rube Goldberg-like contraption called an "R box" --- for random number generator --- to see if his mind can influence the distribution of those numbers. He is pulled in the other direction by a skeptical college classmate, Ronald Mickleweed (the professionals in the novel, including a lawyer named Pillbeam, all have odd, almost Dickensian, names), a professor of physics at their alma mater. The investigators press their claims against each other in a series of tests that ultimately allow each side to claim that its position has been vindicated. As troubled as David is by his sudden notoriety, his life is thrown into more turmoil when his ex-wife Bethany unexpectedly reappears in town. Their encounter revives his suppressed feelings for her and threatens to undermine his relationship with his girlfriend Ellen. What happiness David experiences is further shadowed by the childhood death of his father and his mother's failing health. Alan Lightman, a professor of theoretical physics at M.I.T., is one of those remarkable thinkers able to bridge the worlds of science and humanism while giving equal respect to each. He takes no sides in the debate between those who believe in the paranormal and its scientific challengers, leaving it to his readers to sift through the evidence and make their choice. Still, it's fair to say his sympathies lie with those who give at least some credence to the notion of a hidden world. Lightman's observations about the possibility of that nonmaterial realm are lyrical and moving. Describing David's uncertainty about wh

Wonderful novel by a gifted writer

Published by Thriftbooks.com User , 14 years ago
Alan Lightman is an author who trusts that his readers can deal with complex issues. The protagonist of the novel, David Kurtzweil, experiences an unexpected career change. He ends up working at a mortuary. One day, while working, he 'sees something' when sitting with a recently deceased corpse. The press finds out about his experience and writes about it. A paranormal society contacts David and he is tested to see if he has paranormal powers. GHOST is a fascinating look at the world of science versus the world of metaphysical experience. Only a writer like Mr. Lightman can pull off such a story. If you have not read Alan Lightman you should. EINSTEIN'S DREAMS remains one of the most creative works of fiction written in our generation. High praise.
Copyright © 2020 Thriftbooks.com Terms of Use | Privacy Policy | Do Not Sell My Personal Information | Accessibility Statement
ThriftBooks® and the ThriftBooks® logo are registered trademarks of Thrift Books Global, LLC