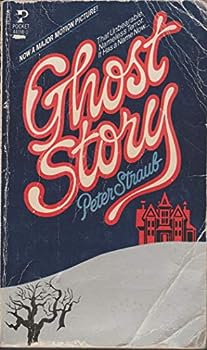 This description may be from another edition of this product. #1 New York Times bestselling author Peter Straub's classic tale of horror, secrets, and the dangerous ghosts of the past... What was the worst thing you've ever done? In the sleepy town of Milburn,...

Published by Boring , 1 year ago
I read it years ago so I decided to buy and read again..I didn't realize how very boring it is now. I guess it might be my getting older. It seems to be to much said over and over about each character that I finally got bored to death with them.

Published by Gerig , 1 year ago
All I can say is... Very interesting, very awesome book to read. Great read... Won't be disappointed...👍📕

Great deal. thanks for the quick ship.

Published by Thriftbooks.com User , 11 years ago
So far it is a really good book. I was very happy with the price and quick shipping. Recommended seller. Thanks again!

Published by Thriftbooks.com User , 12 years ago
The best "ghost story" I've ever read. Don't bother with watching the movie, though.

Quite simply - among my very best!

Published by Thriftbooks.com User , 14 years ago
I first read this book by Peter Straub in the early 1980's. My much prized copy has been read twice since and I found it as enjoyable this time as I did back then. Straub writes with great style and eloquence setting him comfortably apart from his more prolific contemporaries. My advice to any potential reader is : - give the novel time to develop as it is a little slow to begin with - your initial patience will be amply rewarded with a skillfully crafted, spine-chilling story. This novel is included in my personal top 10. I have the same well thumbed copy as I did 20+ years ago and a spare in case. My top ten is very jealously guarded! One more thing - don't bother with the movie based on this book - it is an insult to Straub's great story.

Published by Thriftbooks.com User , 20 years ago
SPOILER ALERT: Contains in depth discussion of key plot points! "...your old men shall dream dreams, your young men shall see visions..." Joel, 3:3 In 1979, I discovered the novels of a guy named Stephen King and began reading more extensively in the horror genre. On the prowl for something similar, I happened on Straub's book in the library. I checked it out, little realizing that I had begun a decades long love affair with his work. It's now been almost twenty years since I read it the first time--I've read hundreds of books since then, but few thrilled me like Ghost Story. Rereading it now, I realize the depth of Straub's accomplishment. Like the legendary storytellers to whom he pays homage, Straub has created a timeless tale of terror, an enduring classic. Reduced to its essentials, Ghost Story is a tale of supernatural revenge. As young men, Ricky Hawthorne, Sears James, Edward Wanderly, Lewis Benedikt and John Jaffrey accidentally kill a woman named Eva Galli. They panic, and decide to cover up her death. Placing her body in a borrowed car, they push the vehicle into a nearby lake. As the car sinks into the muck, they see a sight that haunts them for the rest of their lives: for a moment, it appears as if Eva is still alive, as they catch a glimpse of her face through the rear window. Shaken, they vow to keep her death a secret, and go on with their lives. Fifty years later, the group still lives in their hometown of Milburn, NY, prosperous and content. Now known as The Chowder Society, they meet on a regular basis to swap ghost stories, but they never speak of Eva. Then, Edward Wanderly dies during a party given in the honor of an actress named Anne-Veronica Moore, apparently of fright. The remaining members experience a series of prophetic dreams in which several of them die. Unable to admit to themselves that Eva Galli has returned to haunt them, they send for Don Wanderley, Ed's nephew. A writer by trade, Don has penned a horror novel called The Nightwatcher, based, we later learn, on his own experiences with Eva, known to him as Alma Mobley. Don's arrival in Milburn seems to send a signal to the evil which threatens the group, resulting in the deaths of two more of their number. The survivors band with Don and Peter Barnes, a young man whose mother has been killed by Eva and her minions. Together they struggle to locate and destroy their nemesis. Straub sets the tone for the novel from its first sentences, which express a thought repeated throughout the book. Readers are immediately confronted with the question, "What's the worst thing you've ever done?," followed by the response, "I won't tell you that, but I'll tell you the worst thing that ever happened to me...the most dreadful thing..." Readers are filled with anticipation, wondering what the dreadful thing could be. Straub then proceeds to explore what Stephen King called "a very Jamesian theme...the idea that ghosts, in the end, adopt the motivations and perhaps the

Published by Thriftbooks.com User , 20 years ago
Ghost Story is a classic of horror fiction and as such, it is far, far superior to any of the "slice and dice" horror stories or movies floating around out there. Ghost Story is a book about the real horrors of life, those that we create ourselves, those that originate, not from without but from within.Straub is a masterful writer and his prose is terrific throughout. I really got a sense of "place" with this book, something that doesn't always happen. The characters are well-drawn as well and I came to care about each and every one of them and I took a great interest in their own perception of events.Even if the horror or mystery genre is not your cup of tea, please do not be put off by Ghost Story. This is a real classic of fiction, one that actually defies classification.While Ghost Story didn't actually scare me (I think we have all been too bombarded with horror for that), it did give me shivers and kept me turning pages well into the night. I think fifty or even one hundred years from now, people will still be reading Ghost Story and telling each other what a great book it is.
Copyright © 2020 Thriftbooks.com Terms of Use | Privacy Policy | Do Not Sell My Personal Information | Accessibility Statement
ThriftBooks® and the ThriftBooks® logo are registered trademarks of Thrift Books Global, LLC