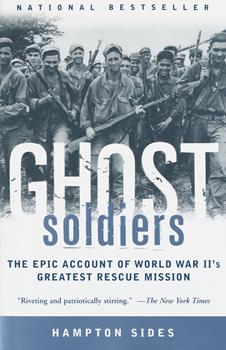 NATIONAL BESTSELLER - "The greatest World War II story never told" (Esquire)--an enthralling account of the heroic mission to rescue the last survivors of the Bataan Death March. On January 28, 1945, 121 hand-selected U.S. troops slipped behind enemy lines in the Philippines. Their mission: March thirty rugged miles to rescue 513 POWs languishing in a hellish camp, among them the last survivors of the infamous Bataan Death March. A recent prison massacre...

Published by MarioDogsMom , 3 months ago
I've read many books on WW2 and this is one of the best. It's hard to read at times, because nothing is sugar coated, but that's how the author puts you there. These stories NEED to be told, taught, and remembered!

Great retelling of the forgotten story and survival of the Bataan Death march.

Published by JS , 3 years ago
Learn of the forgotten heroes of the WWII Pacific theater in this very readable telling of the horrors and resilience of the Phillipine US POWs.

another story that needs telling

Published by Thriftbooks.com User , 16 years ago
When I was a kid, my father and uncles spoke with reverence of those who were on the Bataan Death March. These men who were heroes in my eyes regarded the Bataan guys as REAL heroes. They described the march as the most horrible treatment ever received by US military personel. Only recently have I really begun reading books about the Pacific war, and I stumbled over this one after seeing the trailer for the movie. I'm really glad I found it The book tells the story of the rescue of 500+ POW's from a Japanese prision camp in the Philippines. It was the first Pacific action of the U.S. Army Rangers. It is written as two intersecting narratives. The first narrative is the story of the Bataan Death March, and the camp story. The second begins with the escape of a handful of individuals who bring the camps to command attention, and the preperation for the raid. As the troops grow closer, the narratives slowly converge until they intersect with the assault on the camp. I thought the story was well told and written beautifully. The narrative device of convergence creates momentum and the account of the assault is vivid and to the point. The author did a commendable job of telling the story of the Death March, particularly trying to identify the real villans. A commendable work, I highly recommend this book

Published by Thriftbooks.com User , 21 years ago
Cabanatuan City was my home in December 1941. My parents were missionaries and we were caught in the onslaught of the Japanese attack. We fled our home on December 24 in an attempt to avoid the invasion army. Capture was obviously inevitable, but survival chances were greater if it came at the hands of an occupational force. While hiding in the mountains, we were captured on February 3, 1942, and were taken to the military base at Cabanatuan. After days of extensive interrogation of my father, we were transferred to Santo Tomas internment camp in Manila.The accounts of deprivation and starvation in this book are so accurate it brought back a flood of memories. While the years have somewhat dimmed the horrors of death and destruction during the battle of Manila, if I live to be a hundred I will never forget starvation. So true was the segment discussing recipes. Hours were spent talking, even arguing, about which recipe would produce the tastiest results. This book also reinforces the things we learned about the importance of faith, hope, resilience and a sense of humor...without which we would not have survived.Hampton Sides presents a true picture of life in a Japanese internment camp.

Published by Thriftbooks.com User , 21 years ago
I'm not a fan of War stories or history books. I am not easily moved emotionally. I read this because it seemed like an interesting story. I was astounded by this book. It actually gave me chills in the end. It was shocking how cruel the Japanese captors were to the Americans and gave me a deep respect for the American POW's of World War II. The book is well researched, intelligently written and emotionally stimulating. It reads like a fast paced action novel, the character development makes you feel like you know these people personally and the mood of dread, fear and hope are touchingly communicated to the reader. Don't get me wrong, this is not a tear jerker story, it is an accurate account of history as told by people who actually lived through the ordeal. It has intrigue, spies, guerrillas, culture clashes, desperation and most of all - courage. It is a rewarding read in the end and an adventure from the beginning. Highly recommended!
Trustpilot
Copyright © 2022 Thriftbooks.com Terms of Use | Privacy Policy | Do Not Sell or Share My Personal Information | Accessibility Statement
ThriftBooks® and the ThriftBooks® logo are registered trademarks of Thrift Books Global, LLC