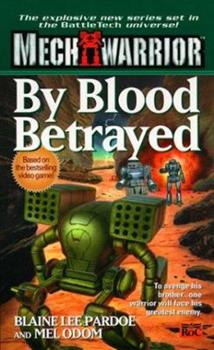 Based on the top-sellingCD-Rom game"Blowing up stuff was never this cool."--USA Today on MechCommander"The best command decision a BattleTech fan can make is to take part in this adventure. And if... This description may be from another edition of this product.

Pardoe does it again!

Published by Thriftbooks.com User , 18 years ago
Blaine Lee Pardoe hits us again with another great book. Even though the title gives away part of the story line, you never truley expect the way this book turns out and the main character is another one that people can relate to. I recomend this book to anyone who likes sci-fi, action adventure, or just a good plot.

Great book- pulls you in!

Published by Thriftbooks.com User , 19 years ago
Particle projection cannons streaking past smoking wreckage of downed 60 ton machines. Explosions tearing apart living mechs. this book is a great book, but I would not reccomend it for young children. this is because it contains fighting sequences and mild gore(knife fights,toxic poisoning) This book, however is a wonderful new series based on the Mechwarrior computer games. I started it a little while ago, and I couldn't put it down! I highly reccommend to anyone who likes action, adventure, and mystery to at least look into this book.

Published by Thriftbooks.com User , 19 years ago
I enjoyed the laster one of Blaine Lee Pardoe's books (Roar of Honor) but I found it a little slow at times. Not so with this one, which I enjoyed all the way through. It was wonderfully realistic. The writing was outstanding and the story itself, while a bit guessable, was very well done. I've read this several times, enjoying it each one.

Published by Thriftbooks.com User , 21 years ago
Actually, I had just read the previous book (by Pardoe), and found it pretty severely lacking. I was pleasantly surprised by (mos of) this one. Mel Odom's touch seemed to be a few early chapters where the characters were more developed than is typically found in these works. I enjoyed it greatly, and only wished other authors would follow in their footsteps and focused on weaving a REALISTIC world with REALISTIC characters... instead of cranking out page after page of "man-powered lightning"... "melting armor plates"... Oh, and have these people EVER played the (board)game? Nobody hits this much.

A trip to the Periphery

Published by Thriftbooks.com User , 22 years ago
I am of fan of Pardoe's work in the Battletech Universe and this one was no diffrent. Usually books about the Periphery do nothing but bore me but this was not the case for By Blood Betrayed. Good Story line and Background that ties the whole story together and right amount of action at the right time. Recommended Reading for the Battletech/Mechwarrior Universe. Good Book for someone just starting out in The Battletech/mechwarrior universe without having to know who other characters from past novels are.
Copyright © 2022 Thriftbooks.com Terms of Use | Privacy Policy | Do Not Sell My Personal Information | Accessibility Statement
ThriftBooks® and the ThriftBooks® logo are registered trademarks of Thrift Books Global, LLC