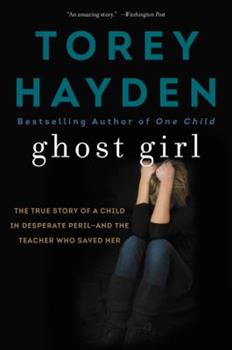 Ghost Girl: The True Story of a Child in Desperate Peril-And a Teacher Who Saved Her

From the bestselling author of One Child comes this compelling, true story of a child in desperate peril and the teacher who saved her despite the odds. Jadie never spoke. She never laughed, or cried, or uttered any sound. Despite efforts to reach her, Jadie remained locked in her own troubled world...until one remarkable teacher persuaded her to break her self-imposed silence. Nothing in all of Torey Hayden's experience could have prepared her for...

Published by Thriftbooks.com User , 4 years ago
Torey Hayden has amazing strength with troubled children and Jadie was one of the worst cases I have read. There were a few parts in her story that were really hard to swallow. Much like A Child Called It, the story is fascinating, yet gruesome. I only gave 4 stars due to the fact of some events that had taken place with this young girl and her sisters that were too graphic.

Published by Thriftbooks.com User , 18 years ago
This is the first book I've read from author Torey Hayden. While I was reading, it reminded me of author Dave Pelzer's book, "A Child Called It." While the content may be similar in that children are affected by the actions of adults, Ghost Girl is clearly different. As Hayden went on to describe the dialogue and experiences Jadie had gone though, there were many times when I was forced to set the book down in order to contemplate what I was reading. The pictures I created in my mind made me sick to my stomach. I could not even fathom what Jadie had to endure. Yet Hayden had the compassion to do what was right, which was to just care. Hayden's caring is what saved Jadie and her sisters from continued abuse. Yet questions went unanswered: were Jadie's descriptions psychotic or from real experience dealing with the occult and Satanism? We may never know and I really don't think it is the main point of Hayden's book. I think Torey Hayden's writing is complete and very intriguing. She has already become a favorite author for education and I look forward to reading her other books of children with special needs.NOTE: While this book will keep the reader interested, it can be very dark, horrid, and at times, scary.

A SAFE PLACE WHERE THE GAG ORDER WAS LIFTED

Published by Thriftbooks.com User , 19 years ago
Once again Torey Hayden has written an outstanding book about her work with children. This book is mainly about Jadie, who, at 8 is (s)electively mute, walks hunched over and expresses fears that initially seem bizarre. At the opening of the book, Torey Hayden meets Jadie and her classmates after half term break. Within a short space of time during that first day together, Jadie broke her self imposed silence and spoke softly when asked a direct question. From that point on, Jadie's verbal progress is remarkable. A bright, expressive child, Jadie described a bizarre life outside of the classroom that certainly makes for a strong case for ritual abuse. Luckily Jadie was provided with a classroom environment in which she felt safe.Jadie feared spiders because she believed they could hear her and "tell on her" if she divulged anything that could be construed as a breach of confidence. She explained her posture as a means of "keeping her insides from falling out;" she fears the number 6 and worries about her younger sister surviving her sixth birthday; she said adults she knew told her how at six one gains power and how people can hurt others with impunity; she describes drinking blood as "oily" and "slipping down." Ghosts and themes of death are trenchant; many of Jadie's early drawings are of ghosts and she said that she and her little sisters were ghosts at night. She also believed that a playmate who had allegedly died had become a ghost and that that child's ghost had gotten into her, Jadie. Each fear she expressed can be traced to ritual abuse. In many cases, ritual abusers claim that spiders as well as insects spy on children and report anything the children might tell. Imbibing blood and other body fluids is often a cult activity and the number 6 has a long history of having dark magical properties attributed to it. Jadie's fear that her sister would not survive past that age appears to underscore this belief. Her strong aversion for Halloween is another good case in point as Halloween is considered a high holiday in cult circles. Jadie wanted no part of it.Another point that leans towards ritual abuse was Jadie's sexual precocity and acting out. She described adult acts and even said how she and her sisters were so abused. Although Jadie had a good command of language from the telling, the question remains as to what really took place. This is a very chilling book that will certainly leave indelible impressions upon the minds of all who read it. It is easy to make good cases for ritual abuse, but that is remains an open question. Jadie was a very brave and soldierly little girl who tried to protect her sisters and explain a part of her life that can at best be described as hazy and shadowy.

Published by Thriftbooks.com User , 20 years ago
This is the incredible story of Jadie, a young girl who refuses to speak until her dedicated teacher convinces her to do so. Once she does, the story that comes out of her mouth--the story of her home life--is one that will shock, sadden, enrage, and leave the reader in disbelief. I could not put this book down. Jadie's character has a certain mystique about her when she does speak and as her story starts to unfold. It is intriquing and frightening as you ask yourself whether the horrors she's telling of are real or the result of a vivid imagination. Jadie's irrepressible spirit; her desire to tell her story, and her seemingly split personalities were incredibly fascinating, and I was inspired by the story of someone who has survived such horrific abuse, and had the courage to blow the horn on it as well. I will warn you, though...when Jadie begins to tell the story of the abuse she's suffered, the book leads you through several very graphic scenes of sickening sexual abuse. This book is not intended for children or those who are easily upset by stories of child abuse. There are also some statements that offer a disturbing look into the world of satanic cults, and many of those statements talk about rituals that turned my stomach. All in all, though, this was an incredible, eye-opening and inspiring story. It reminded me of the sacrifices that teachers make to each child in this country, each and every day.

Published by Thriftbooks.com User , 21 years ago
This is the first Torey Hayden book I've ever read and I know that it's not my last. I couldn't put the book down. I also teach emotionally distrubed children and feel that Ghost Girl a must read for any Special Education teacher.

Published by Thriftbooks.com User , 21 years ago
Ghost girl by Torey Hayden shows how one person can change another person's life....forever. This is probably one of the most successful stories in showing a teacher's love and courage, Jadie would still be home getting abused. In this story Jadie is crying out to the world by being an "elective mute." While others ran away or gave up, this teacher, torey, got Jadie talking and communicating with her and opened her up to telling her the sick and horrifying life she was living in. Jadie was living in a pure, Satanist nightmare and Torey did the only thing she knew how to get this girl help and get her out of this nightmare; she fully succeeded in doing that. So Jadie wouldn't be abused anymore, she was placed in a foster home far away, and before she left, she gave Torey a piece of paper. "In my hand I still had the small piece of paper Jadie had given to me. Carefully pulling it open I found two words. Thank-you."
Copyright © 2020 Thriftbooks.com Terms of Use | Privacy Policy | Do Not Sell My Personal Information | Accessibility Statement
ThriftBooks® and the ThriftBooks® logo are registered trademarks of Thrift Books Global, LLC