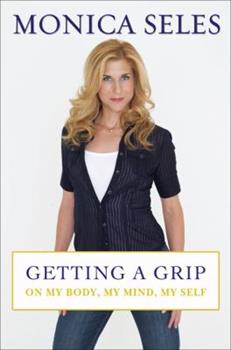 Getting a Grip: On My Body, My Mind, My Self

From her record-setting win at the French Open at age 16 to the depression that sidelined her career to her triumphant return, Seles' determination, amazing talent, and touching vulnerability make her story both incredibly human and inspiring.

Published by Thriftbooks.com User , 13 years ago
I don't read a lot of memoirs, but I was really drawn to this one because of Ms. Seles' honesty and openness in her recent New York Times interview. I've been a fan of hers for many years, and have always wondered how she coped with the horrible stabbing. In this memoir, Ms. Seles is not only inspirational, she is vulnerable and thoughtful. She lets down her guard completely and tells her story without whining or complaining, a real plus. This was very moving and I think the book can be beneficial to fans of Monica Seles as well as those who are struggling to overcome eating disorders and/or grieving the loss of a parent. I remain a huge fan. Lisa McMann, New York Times bestselling author of Wake

Published by Thriftbooks.com User , 13 years ago
I purchased this book after seeing Monica discuss her book on "Good Morning America." I too used food to "stuff down" my emotions instead of dealing with them and allowed food to control my life for far too many years. After recently becoming more in touch with my emotions and dealing with very traumatic incidents from my past, food does not have the same unhealthy hold. Reading Monica's book was interesting to see how she has learned to deal with her addiction to food.

Published by Thriftbooks.com User , 13 years ago
This is a well written book and Monica writes with sincere honesty and frankness. Monica has been one of my all-time favorite sport figures since my early childhood. My interest in this book was a more personal one since both Monica and I come from Novi Sad (in the former Yugoslavia) and I remember, as a kid, strolling almost daily past the tennis courts where she used to play - thinking, "This is where Monica Seles, the world's best tennis player, used to practice!" I am sure she was (and still is) a huge inspiration to the many top-seeded tennis players who are/were coming out of the former Yugoslavia and beyond. In any case, Monica's story focuses more on her life once she had arrived to the tennis academy in the USA - at around age 10 and the hardships and triumphs she had faced since. This book is not meant solely for a specific group of readers. Anyone can relate to her story because she is (for a lack of a better word) a quite simple and normal person. She is not at all someone who went crazy with their money and overdose on cocaine, became dependent on something rather disgusting, and then ended up writing a tell-all book about their experience which only a small percentage could relate to. Rather, the problems she had faced are quite real and common. It goes to show that money and success are not everything and that happiness comes only when one is truly content with oneself. I would also like to add that Monica looks better than ever and, it seems to me, that her mental/spiritual strength is stronger now than her physical strength ever was. A truly great read!

Published by Thriftbooks.com User , 13 years ago
When it comes to athletes and their off-court, off-field problems, I usually think, "Big deal; all that money you get should make the hurt go away!" But Monica Seles's memoir is different. From the start, she's not writing to beg for sympathy. This is her story of her struggle with compulsive overeating (the reason I picked this book up, as I, too, struggle with emotional and compulsive overeating), the horrific stabbing she endured in Germany, and shortly after that, discovering her beloved dad/coach was terminally ill, not in that order! I felt awful for her, for the rude awakening she received in realizing how cold the business of tennis is, not to mention the lack of justice when her attacker was simply given probation and set free, plus she had to pay his freaking legal bills. It was good to see that even celebrities struggle and cry, although for me, Monica Seles isn't like other celebrities. She seems miles above all the others in her authenticity and grit. I loved this book and read it in 2 days. I cried so much in reading it, I saw myself in so much of her struggle with her weight and food, and appreciate her honesty in sharing difficult memories and episodes in her life that anyone else would rather pretend never happened. Five stars!!!

Published by Thriftbooks.com User , 13 years ago
I had never heard of Monica Seles before hearing her do an interview on NPR last week, but her story sounded really interesting and so I decided to buy this book. I don't know a lick about tennis - I had to look up "Grand Slam" on Wikipedia because Seles refers to it so much and I had NO CLUE what it was. Despite my ignorance of tennis, I still felt incredibly drawn in to Seles's story from the very first pages. Seles experienced a lot of highs, and a few very tragic lows in her first 30 years and she does a good job of striking balance when writing about both. I couldn't help but silently cheer along when she was describing the good times and cry along at some of the bad. I still don't understand much about tennis, but I now have a greater appreciation for the dedication and sacrifice professional tennis players must make to succeed in the sport. I also imagine that tennis fans will get a great deal more out of this book than non-fans will, as Seles provides an insider's point of view on the business side of tennis that the general public never sees. What I appreciated most about this book is that Seles wrote about her experiences with both compassion for herself and a healthy dose of humility. She never wallows in self-pity or denies her own shortcomings but she also acknowledges the very real pain she experienced at the hands of others - classmates at the tennis academy, the ruthless press, and her attacker in Germany. She balances this well, however, by also acknowledging the tremendous positive role her family played in keeping her grounded and the support she received from fans, fellow players, and her coaching teams. In so many memoirs, the subject is either cast as the hero or the victim of their life story. Seles, however, does an excellent job of reconciling in the end that, like everyone else, she is both. It's a satisfying journey to take with her and I found Seles to be nothing but sincere and likeable the entire way.
Trustpilot
Copyright © 2022 Thriftbooks.com Terms of Use | Privacy Policy | Do Not Sell My Personal Information | Cookie Preferences | Accessibility Statement
ThriftBooks® and the ThriftBooks® logo are registered trademarks of Thrift Books Global, LLC