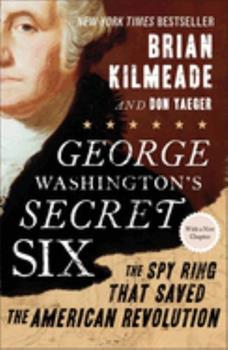 by Brian Kilmeade and Don Yaeger

*Now with a new afterword containing never-before-seen research on the identity of the spy ring's most secret member, Agent 355 "This is my kind of history book. Get ready. Here's the action." --BRAD MELTZER, bestselling author of The Fifth Assassin and host of Decoded When George Washington beat a hasty retreat from New York City in August 1776, many thought the American Revolution might soon be over. Instead, Washington rallied--thanks in large...

Published by Renegade , 8 months ago
I love to read..Mostly history books. Some about famous people..Saw this at Walmart a few years back for 5 times what I paid here. Can't wait to read it.

Published by PatriotJoe , 1 year ago
Why was this not taught in my history class? What is spectacular story story! I have read a few books on this particular chapter of our nation's history and still find myself fascinated.

A must read for history buffs!

Published by Georgia girl , 3 years ago
The Secret Six are revealed in this book of intrigue, danger and courage. I love reading about American history and thanks to Brian Kilmeade for bringing to life this part of our heritage!

Published by Thriftbooks.com User , 4 years ago
I read this shortly after it was first published and they say never judge a book by its cover. But the cover and the way the book was published added to its attraction. It lured me to get a copy. Then I read it and I thought it was a very readable account written by the two authors telling a good story. Some reviewers said the book was populist or dumbed down history. But it is intended for readers who don't have the time or inclination to read more expensive and scholarly books on it by professional historians. But this book is good too and I would describe it as a good read. It will appeal to those who are maybe not American who may not know about this part of American history. I am European for example. Why I enjoyed reading about the brave, clever and admirable team of six people, including one woman, and maybe more, unknown, who helped America win its independence and freedom from being treated as a colony of England or the British empire. They had an important role equally as much as the soldiers on the battlefields. I so enjoyed it, I got 2 more books for friends. And may get a few more...
Trustpilot
Copyright © 2022 Thriftbooks.com Terms of Use | Privacy Policy | Do Not Sell or Share My Personal Information | Accessibility Statement
ThriftBooks® and the ThriftBooks® logo are registered trademarks of Thrift Books Global, LLC