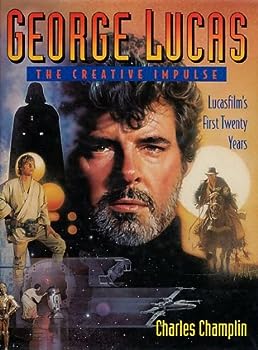 This revised and updated edition of Charles Champlin's insightful study of George Lucas includes 85 new illustrations and brings the story of this remarkable man and his innovative empire up to the... This description may be from another edition of this product.

Published by Thriftbooks.com User , 19 years ago
Wonderful book about the great filmaker who gave us such masterpieces as THX 1138,Raiders of the Lost Ark and Star Wars. . . .very rich and well done with beatiful colored pages, and comments from other filmaker on the movies of George Lucas. . . . a wonderful edition that would look great on anyone cofee table,so go out and buy it today.

Published by Thriftbooks.com User , 23 years ago
This book gives you a sequence of events in Lucas' creative empire. It also contains interesting quotes from the man himself as well as other significant contributors to his work. It may come as a surprise to some of us that Lucas' goals are quite similar to our own; the only difference is that he has a very strong will to make it all come true. Contained in this book are his projects that touched many who will never imagine the same way again.

Published by Thriftbooks.com User , 23 years ago
George gave us visions of a future never before seen - this book is a chronicle of his works. The full page images and stories behind the ideas will leave you with a better sense of how this incredible universe came to be.A GREAT BOOK!

An in-depth look at the man behind the mogul

Published by Thriftbooks.com User , 24 years ago
George Lucas: The Creative Impulse is a great book which gives the reader a view over George Lucas and his life and filmography. The book introduces in sections Lucas' "early years", his films and also briefly his companies (ILM, Skywalker Sound, LucasArts) and also takes to a tour around Skywalker Ranch.Although there isn't as much behind-the-scenes info I would have hoped for, the book was really interesting with lots of big photographs taken during the production of Lucas' films and other neat stuff.Great book.
Trustpilot
Copyright © 2022 Thriftbooks.com Terms of Use | Privacy Policy | Do Not Sell My Personal Information | Cookie Preferences | Accessibility Statement
ThriftBooks® and the ThriftBooks® logo are registered trademarks of Thrift Books Global, LLC