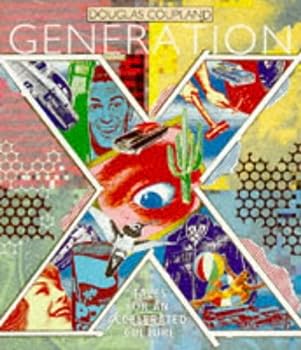 This description may be from another edition of this product. "Generation X "is Douglas Coupland's acclaimed salute to the generation born in the late 1950s and 1960s--a generation known vaguely up to then as "twentysomething."Andy, Claire, and Dag, each in...

Published by Thriftbooks.com User , 17 years ago
The only thing out of print here is a hardback "limited edition" which was released about 2 years after the book's original paperback printing. The paperback is still widely available and given how good the book is and how much it seemed to galvanize a generation (in both good ways and bad), I'm sure it will be in print for a long time to come.

A Touchstone of Contemporary Self-Consciousness

Published by Thriftbooks.com User , 18 years ago
It was with a sense of ironic nostalgia that I picked up a copy of "Generation X" in the used bookstore last month. I enjoyed reading it almost a decade ago as I ran from/toward my post-college life in a city and climate I had never lived in before. The fact that the three principal characters were doing essentially the same thing I was struck a few chords of identification back then. Andrew from Oregon, Dagmar from L.A. and Claire from the country club world make a fun Platonic threesome, "dropping out" of society by working "McJobs" in Palm Springs. Though slightly younger than the narrator's younger brother, Tyler, I recognized much of the existential angst of growing up in a throwaway, mass pop culture. And I am also old enough to remember the constant threat of nuclear holocaust (or nucular, as the undereducated pseudo-cowboy occupying 1600 Pennsylvania would have you believe--see p. 165 for definition of "Obscurism") which permeates the novel.The world has improved in some ways since this book came out in 1991 when college grads were being welcomed by the worst economic environment for entry-level positions since the Great Depression, but don't tell that to the poor kids graduating next May. Over the last decade many GenX'ers found out that yes, they could do better than their parents after all, but then narrator Andrew Palmer would be quick to question the definition of "better."Every generation thinks it's so tough and that the whiny young kids of today have it easier than they did. The intelligent social observer will appreciate that challenges DIFFER from generation to generation--it's the lucky ones, not necessarily the weak ones, that don't have to fight wars to save the world from Hitler, stop the red menace in the jungle, or comb the deserts to keep the oilmen in power and SUV drivers in their high and mighty heated seats. Generation X is a marketing term pretty effective in its day; it's also a demographic that will be running your world in the next ten to fifteen years. "Generation X" is a curious and entertaining novel. It's an insightful commentary about those who want to overcome the vapid and exploitative advertising culture that helped shape their characters whether they liked it or not. It's worth the re-read, and if you haven't, it's worth a first read.

Published by Thriftbooks.com User , 19 years ago
Douglas Coupland is a superb writer that seems to always know the right words at the right time. This particular novel Generation X, goes deep into the lives of three young people that are searching for some meaning in their lives, for a simple explanation. Andy, Dag, and Claire work worthless jobs, known as McJob's. A McJob is, "A low-pay, low prestige, low-dignity, low benefit, no-future job in the service sector. Frequently considered a satisfying career choice by people who have never held one." The three are overeducated young people who have fled to the California desert to try to capture some concept of life in their little bungalows. While searching, they manage to create a unique lifestyle that is different and intriguing in its own way. They drink like there is no tomorrow and they love to tell stories. A hot story topic choice is the end of the world, usually with nuclear weapons or the atomic bomb. It gives you enough of each of their lives to be jealous. Andy, the protagonist, is a very realistic and plausible character. He does nothing that is unfathomable. The novel is based on complete formula fiction, and has an original plot that must be interpreted. It stays away from the Hollywood stereotype theme, the boy meets girl, fall in love, etc... The theme is developed with an apparent meaning. Coupland openly shares and describes his views on what consumerism has become in America. He talks about how our culture today gives us nothing to go on, and how we sometimes feel alienated. Therefore, we are a society based on consumerism because it is the only thing that is given to us to identify ourselves with. Andy, Claire, and Dag create their own lifestyle in the desert because of how they are excluded from the outside world. People can only identify themselves by what they posses, and how much of it. It is an unfortunate problem that has appeared in America's society that is trapping young adults.

Published by Thriftbooks.com User , 21 years ago
Gorgeous and funny, this book has really got something intangible that can't be captured by the trillions of Time and Newsweek articles about the slacker generation and this, their "Bible." It is a fairy tale type book with a set of post-modern lessons, taught by twentysomething, burned-out friends. It is just right for anyone who's grown up next to a nuclear power plant and freaked out when they test the meltdown sirens, or for anyone who has been stuck in an awful temp gig and fantasized about dropping out to work at a McDonalds and drink gin at noon. There is just something so appealing about the journey of the protagonists that you can read it and feel like you've escaped from life too.Always funny, very ironic, and filled with droll slang ripe for appropriation, this book is a fantastic vacation on paper.

HOW CAN THIS GEM BE OUT OF PRINT??? WAKE UP, PUBLISHERS!!!

Published by Thriftbooks.com User , 23 years ago
This is how it all started for Douglas Coupland. The story of Andy, Dag and Claire, three Generation-X-twentysomethings. Sharing an inside look into their everyday life with the reader, garnished with tasteful little stories from their past life, spot-hitting illustrations and guidelines such as "bench-press your i.q." make this one an absolute must-read for everybody born after 1968 and a bible for parents to understand the real problems of their little ones.BUY THIS, NO MORE WORDS NECESSARY!!!
Copyright © 2020 Thriftbooks.com Terms of Use | Privacy Policy | Do Not Sell My Personal Information | Accessibility Statement
ThriftBooks® and the ThriftBooks® logo are registered trademarks of Thrift Books Global, LLC