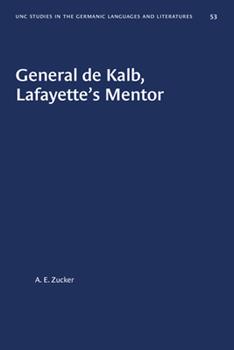 Originally published in 1966, A. E. Zucker presented the first modern biography of General de Kalb, a German by birth who held the rank of major general in the Continental Army and died at the Battle of Camden during the American Revolutionary War. Through the use of previously unpublished materials, Zucker's biography challenged previous views of de Kalb and depicts his relationship with Lafayette.