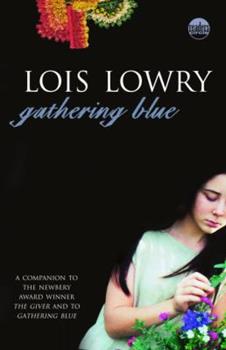 Lois Lowry's Gathering Blue continues the quartet beginning with the quintessential dystopian novel, The Giver , followed by Messenge r and Son . Kira, an orphan with a twisted leg, lives in a world where the weak are cast aside. When she is given a task that no other community member can carry out, Kira soon realizes that she is surrounded by many mysteries and secrets. No one must know of her plans to uncover the truth about her world--and to find...

Stop putting spoilers in the reviews please, thank you

Published by Jericho Lugo , 1 month ago
I read the Giver. It was great. I’ve gotten to about 56 pages into Gathering Blue now and saw these reviews. Had to stop reading them because spoilers. Please stop doing that, my good people. Can’t wait to finish the book!

The order, not the book

Published by Dorothy , 1 year ago
I haven’t read the book yet, but I’m super excited to read it!! However, I’m dissatisfied with the order. I’m pretty sure I ordered paperback, but I got hard cover. I really wanted a matching set! I’m kinda sad and upset now. But hey, a book is a book and I can’t wait to read it! Just gotta finish a couple other books first. Haha

I wish it were a longer book!

Published by Thriftbooks.com User , 17 years ago
This is another excellent book by Lowry. I had first read The Giver, which is also very good. This book gives a different perspective of the far future than The Giver but bears a lot of similarities. Where life in the Giver was all pleasant and happy, in this book, life is rough with everyone fighting each other for what they have. In both books, "undesirables," meaning the old, deformed, or infirm are eliminated from society. As in The Giver, the main character is one who bears a special talent, which is needed to be able to pass on the long ago history of the society. In Gathering Blue, Kira, though born with a clubbed foot, is needed to because she has a special talent for sewing that is beyond what others have. She is tasked with restoring a coat that is to be worn by the singer at the annual gathering. Different sections of the coat depict different stories of society's history. Kira encounters Thomas, a wood carver, who is tasked to repair the staff used by the singer and Jo, a young girl, who is being trained to eventually be the next singer when the current one will "disappear." As in The Giver, the world seems to be devoid of color. Kira spends some of her days visiting with an old woman (Annabella) who has a talent for dying threads. Annabella instructs Kira how to take the dyes from various plants so that Kira can dye the threads to use for the singer's coat. One of the colors that Anabella doesn't teach Kira about is blue. So an important part of the book involves Kira getting the means to make blue and hence the title of the book. After, Anabelle "talks" too much, Kira learns that she suddenly died and was taken to "the field." where people are brought after they die. Little by little, Kira starts to realize that all that she believed is a lie and she starts to piece together "the truth." I finished this book in one sitting and my only complaint, as with The Giver, is that the book is too short. Also, it begs for a sequel. The Giver appears that it could take place at the same time as Gathering Blue, but in a different part of the world. Perhaps, Ms. Lowry's intention is to somehow write a sequel book that will bring both books together. I hope that Ms. Lowry continues to write these types of books because I highly enjoy them and see that see has a marvelous talent as a storywriter!

Published by Thriftbooks.com User , 20 years ago
The Giver was my favorite book until I read Gathering Blue! This new book by Lowry is as intriguing as The Giver, and gives the reader more to think about. Science fiction is not my favorite genre, but these books are definitely an exception. Kira, the main character, is a likeable, compassionate young woman who is saved from death because of her talent for embroidery which she had learned from her mother. Matt, her friend is enjoyable in his naivity, but he definitly becomes a valuable friend. Thomas, the Carver, is interesting because of his artistry and background being so similar to Kira's. The theme of the artist as the predictor of the future is an interesting theme. This book explores the value that artist's bring to society, as well as, the importance of community and of love among humans. The idea of the artist being controlled by the state is interesting because of the many struggles our country has against/for censorship in the arts. I would recommend this book to young adults as well as adults.

Published by Thriftbooks.com User , 21 years ago
Here's a touching novel with a great moral. Kira, the main character of Gathering Blue is a girl with a lame leg who lives in a future world that has a simple rule - all those who are weak must go. Somehow, Kira's mother saved her from the demise; but now that Kira's mother is dead, the first thing that happens to Kira is that she is accused of being lame and brought to the council of Guardians. Surprisingly, the Council saves Kira because of the special gift she has to make beautiful embroidery. Kira stays in a special room and discovers another child like her who also has a unique talent named Thomas. Kira, Thomas, and a younger boy named Matt together find the secret of their village. This is a great book for all teens.

Published by Thriftbooks.com User , 21 years ago
What if all modern technology vanished? What if the daily struggle for food and shelter became the utmost priority in our world? Who would be considered of value in the society that followed? Ms. Lowry has given readers a story with all the impact of her earlier book, The Giver. Gathering Blue is also a novel set in the possible future, where insular towns and villages have developed, and contact between them is almost nonexistent. In one of these villages, the reader is introduced to a young girl named Kira. Through Kira's eyes, the reader is gradually pulled in to discover the horrifying, and entirely possible, secret of Kira's world. Gathering Blue is absolutely stunning in the concepts it presents; I'm certain that teachers will want to incorporate this powerful book into their reading curriculum. Along with Stargirl by Jerry Spinelli and Matilda Bone by Karen Cushman, Gathering Blue will be among the top contenders for next year's Newbery Award.
Copyright © 2020 Thriftbooks.com Terms of Use | Privacy Policy | Do Not Sell My Personal Information | Accessibility Statement
ThriftBooks® and the ThriftBooks® logo are registered trademarks of Thrift Books Global, LLC