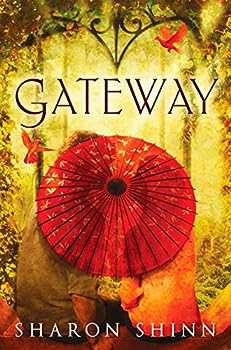 This description may be from another edition of this product. As a Chinese adoptee in St. Louis, teenage Daiyu often feels out of place. When an elderly Asian jewelry seller at a street fair shows her a black jade ring--and tells her that "black jade" translates...

A fun and enjoyable read

Published by Thriftbooks.com User , 11 years ago
I've been an avid reader of Sharon Shinn's books ever since the Twelve Houses series. This is one of her Young Adult books and it has a much simpler plot and younger characters than her more mature work. But that isn't to say this book didn't shine. In fact, I thought her characterization was top notch. The main character, Daiyu, was an enjoyable person to watch the story unfold through. Her thoughts, dialogue and choices were all very real and believable. I would have preferred a less ambiguous ending, but I still felt this book deserved 5 stars. I recommend this book for anyone who wants to spend a few days reading a fun, lighthearted story with intelligent and engaging characters, an interesting premise, and a charming plot with sweet, gently romantic overtones.

pushes the boundaries of the genre

Published by Thriftbooks.com User , 11 years ago
This book is a change of pace for Sharon Shinn. Unlike some of her other books, this book is more character-driven rather than plot-driven. No bold romantic adventure in this book (so typical of the fantasy genre), but instead a fine cast of characters, planted in a believable and fascinating Asian alter-world. The story, like its characters, is also more subtly and finely drawn. In particular, the main character, Daiyu, makes an independent decision that is key to this story--not an obvious right choice to make, and in fact, it may even have been the wrong choice! The ending is ambiguous, too, not a 100% happy ending. I liked all these developments. As I was reading this book I was reminded of Ursula Le Guin's fantasy novels, which are considered more literary rather than representative of the fantasy genre. That may be happening with this book of Shinn's. Her characters and her storyline are breaking away from some of the stereotypes and conventions of the genre. This book has its flaws (don't they all?), but I appreciate how Shinn has expanded what she can do in this book. And, when all the analysis is said and done, this book is a very good, enjoyable read. Worth more than 4 stars, IMO, perhaps not an exceptional 5 stars, but I'm going with the higher rating for the effort it took to push the boundaries of the genre.

Published by Thriftbooks.com User , 11 years ago
This was the first book I read by Sharon Shinn. It was really creative - what would life be like if a different culture was the majority? I enjoyed the twists and turns and followed the wild changes easily, thanks to the writer. I thought the hero-girl was realistic, although I didn't feel like I became Daiyu. It was more like watching someone and wishing I could tell her what I would do if I was her, but not being sure of anything in such a strange situation.

Published by Thriftbooks.com User , 11 years ago
I don't usually read alot of SF/fantasy, but I thought this was a fun, interesting YA novel. It definately makes me want to check out more by this author and explore this genre further. It wasn't long, under 300 pgs, and I think it would be enjoyable and appropriate for any age. It's something that I would like to share with my daughter. I enjoyed it for many reasons: Daiyu's adventure in the other iteration is both like and unlike Earth in many intersting ways. It leads you to ask yourself questions about the world we live in. Just how different is Jai from Earth, anyway? The explanations of the ins and outs of travel between iterations are simple and not bogged down with alot of nonsence facts. The descriptions of Jai were fun; I liked the world it created in my head. I really enjoyed the author's writing style. I give it four stars because it was an enjoyable read that was light but also thought provoking. I skipped the fifth star because the story didn't always move along quickly, and it took awhile for me to feel connected to the main character, Daiyu. A solid four stars, I'm glad I found this one.
Copyright © 2020 Thriftbooks.com Terms of Use | Privacy Policy | Do Not Sell My Personal Information | Accessibility Statement
ThriftBooks® and the ThriftBooks® logo are registered trademarks of Thrift Books Global, LLC