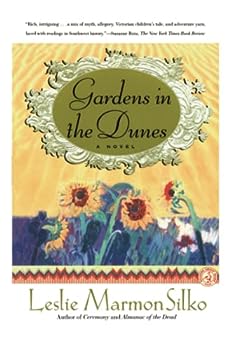 GARDENS IN THE DUNES: A Novel

A sweeping, multifaceted tale of a young Native American pulled between the cherished traditions of a heritage on the brink of extinction and an encroaching white culture, Gardens in the Dunes is the... This description may be from another edition of this product.

Published by Thriftbooks.com User , 21 years ago
Silko's novel is fascinating. Its continent-leaping plot begins and ends with the simplistic lives of the "sand lizard" Indians of the southwest. The great themes of greed and ambition are visited along the way as well as the more intimate ones of loyalty and courage. As one might expect, when the "civilized" world intrudes into that of the young Indian girls, conflict and betrayal are the result. But politically correct ideas are not played out heavyhandedly here. Deep character development and the heartbreaking story itself are the priority of this writer.I rarely savor a novel as much as I did this one. In fact, while reading dozens of others concurrently, this one took nearly half a year. There's a marvelous amount of gravity working in these pages.

Published by Thriftbooks.com User , 21 years ago
I am really astonished at the low sales rank for this lyrical and beautifully written novel. Silko's feel for the spirit of place is acute. I was swept along by Indigo's story, and it was enlightening to see the author explore North American history through the point of view of an indigenous female. I wouldn't say this novel was packed with agendas as one of the editorial reviews suggested - simply an alternate point of view achingly rendered.

Gardens in the Dunes is a masterpiece

Published by Thriftbooks.com User , 22 years ago
This new novel by Leslie Marmon Silko is a masterpiece. Silko has written another wonderful book about Native Americans, but at the same time we can read the history of Western civilization following the story of these gardens and plants. The prose is always original, intense, lyrical.

A mature Silko sends us back to European wisdom tradition.

Published by Thriftbooks.com User , 22 years ago
Review: Gardens in the Dunes by Leslie Marmon SilkoWhen Leslie Marmon Silko advised Gary Snyder not to look to native American traditions for his poetry, her anger was justified. Garden in the Dunes, Silko's latest work in hardback, may represent the author's mature outlook, synthesizing native and European traditions in one fascinating work which, nevertheless, carries her earlier message. Documenting the horrors of Western European culture as they manifest in the culture of the United States at the end of the nineteenth century, Silko manages to send Hattie, her Caucasian heroine, back to Europe, much as Hawthorne sends Pearl in The Scarlet Letter. Indigo, the child heroine of the novel, encounters everything from a cruel episode recalling D. H. Lawrence's Lady Chatterly's Lover in the northeastern United States to manifestations of early goddess figures in an Italian black garden. The latter are most recognizable to the child as emblems of her own Sand Lizzard culture, one related to but independent of other Southwest Indian cultures. Silko's condemnation of greedy white males is balanced by Hattie's abortive attempt to bring forth a thesis on the heresies of Southern France, particularly that related to Mary Magdalene. Eventually, Hattie pays the price for her naivete, though she has educated Indigo in the process, loving her and receiving affection from the child in return. More clearly organized and faster paced than Almanac of the Dead, Gardens in the Dunes provides readers with an intriguing, web-like tale of a host of characters, Messianic traditions involving the Ghost Dance, and Biblical symbolism of the Garden of Eden. Lyrical descriptions of gardens, natural plant life, and wide-ranging, episodic action make this poetic book a page-turner, especially for readers who savor fine writing. Thematic motifs of Silko's other works, including the rape of the land and its inhabitants, resonate with Silko's earliest novel "Ceremony." Evil is still at work, though it isn't always the European culture that manifests it. Witchery akin to that witnessed by Lecha in Alaska in "Almanac," a manifestation of the covert 500 year's war waged by native peoples against Europeans, and by Tayo in World War II's wounded, robs characters of life and humanity as they pursue ill-gotten gains. Hattie's husband is too busy trying to recoup his fortune to serve the goddess, as his wound suggests he should have been doing. The real and symbolic impotence of Hattie's marriage drives home root causes, having and gettting, resulting in 50% divorce rates in our time. The adventures of Indigo's monkey and parrot provide comic relief as well as commenting upon the actions of the characters. But, the return of the serpent to the pool in the dunes drives home the allegorical nature of Silko's narrative. A dramatic read, Garden in the Dunes is a classic, for its structure, range of characters, archetypal symbolism, a
Trustpilot
Copyright © 2022 Thriftbooks.com Terms of Use | Privacy Policy | Do Not Sell My Personal Information | Accessibility Statement
ThriftBooks® and the ThriftBooks® logo are registered trademarks of Thrift Books Global, LLC