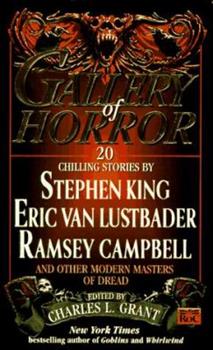 Some galleries specialize in the art of painting or sculpture. But this gallery specializes in the most riveting art of all--the art of horror as practiced by the modern masters of the genre. This anthology of 20 stories features Stephen King's "Nona" as well as all-star stories by Robert Bloch, David Morrell, T.E.D. Klein, Eric Lustbader, Ramsey Campbell, and many more.

Published by Thriftbooks.com User , 17 years ago
This interesting book is a collection of some twenty horrific short stories, all written by great authors. As with any anthology, this one is a mix of great, good and merely OK stories. I suppose it depends on your tastes.As for me, my absolute favorite was Down Among the Dead Men by Gardner Dozois and Jack Dann. In it, a Nazi concentration camp inmate discovers that one of his fellow prisoners is a vampire. But, with such horror occurring all around him, what does it mean to be a monster? My second favorite was Petey by T.E.D. Klein - I love monsters stories.Overall, I thought that this was a very good book, one that kept me up late each night reading. I highly recommend it to you.

A decent collection of horror stories

Published by Thriftbooks.com User , 20 years ago
Well this book is a mixed bag. Some of the stories I really liked and were really well written, yet others I just didn't like at all. I loved the chilling story of "Canavan's Back Yard," and I thought "The Rubber Room" was an interesting tale of a paranoid man thinking Jewish people had a conspiracy against him. Also, "Out Of Sorts" is a clever werewolf story. And as other have mentioned, "Down Among The Dead Man" is an excellent WWII vampire story (while that may sound bizarre, it is written so well you won't even notice just how odd this seems). However, like I said, I did not like some of the other stories. Like "Death To The Easter Bunny," for example. I just found this story repulsive (if you've read the book, you'll know what part I'm talking about.) And "The Crazy Chinaman" also seemed very out of place in this book. But in this book, the good outweighs the bad. I would recommend this book to fans of horror in general or fans of any of the authors.

Published by Thriftbooks.com User , 24 years ago
This is a reprint of the Dodd, Mead Gallery of Horror from the early 1980's. There are a number of stories which stand out but "Down Among the Dead Men" by Gardner Dozois and Jack Dann in particular. This is a story you will not soon purge from your subconscious. There is also the classic "Canavan's Back Yard" by Joseph Payne Brennan which is one of the master's best. Seek out other collections from Jospeh Payne Brennan, he is one of the unknown masters. This is a collection which deserved to be reprinted although they marketed it as if it was a new collection. Highest marks!
Copyright © 2020 Thriftbooks.com Terms of Use | Privacy Policy | Do Not Sell My Personal Information | Accessibility Statement
ThriftBooks® and the ThriftBooks® logo are registered trademarks of Thrift Books Global, LLC