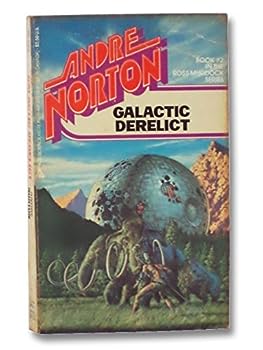 Galactic Derelict is a science fiction novel American writer Andre Norton, the second in her Time Traders series. It was first published in 1959, and as of 2012, had been reprinted in eight editions.... This description may be from another edition of this product.

Published by Thriftbooks.com User , 12 years ago
Galactic Derelict (1959) This is the second book in the Time Trader Series by Andre Norton, following The Time Traders(caution there is an omnibus called Time Traders Time Traders: The Time Traders & Galactic Derelictand a single novel with that name) You met in the Time Traders: Ross Murdock Ashe Major Kelgarries, In this book you learn about: Travis Fox , a Time guesser, one who can guess the approximate age of an object simply by holding it. Travis is definitely the protagonist in this story. He will need all the Chiricahua Apache skills that he honed under the tutelage of Chato, his mentor. Renfry, a technician, his name is mentioned so seldom, I had to go back and look to get it, several times the author just refers to "the technician"; he was inadvertently on board the ship when it took off. Operation Folsom I wonder what is the difference between a Clovis point and a Folsom point. The both look the same to me, but I've only seen pictures of them. I never held either one. This book is about being stranded on a very sophisticated star ship set on what we would call "auto-pilot". It even makes several stops, one for refueling, others for who knows what purpose. * Since it is the second book in the series it can have more action than the first on. Most of the background was in the first book, Time TradersISBN-13: 978-1421827346 . The next book in this series is The Defiant Agents Galactic Derelict (1959) is the second SF novel in the Time Traders series, following The Time Traders BN-13: 978-0671319526. To me this book is about the angst felt by the crew by being trapped on a star ship not knowing where it was going or even if they could get off at one of the stops along the way without being marooned on an unknown planet. I highly recommend this book for Andre Norton fans and for anyone else who enjoys tales of alien civilizations and time travel and space travel and above all adventure. Be sure to read the next book in the series is Defiant Agent. You can see all the books on this series by going to my Listmania Andre Norton Time Trader Books. Gunner February, 2010

Best of the series

Published by Thriftbooks.com User , 13 years ago
Galactic Derelict is easily the best of the Time Traders series actually written by Andre Norton (which I believe comprises the first four books). Four time travel agents are accidentally whisked into space by an over-eager auto-pilot mechanism, leaving them to wonder if they can ever return home. In the process they find a bit more about the space faring civilization encountered in the first book of the series. I highly recommend this book, although I do not feel it stands on its own. It is also quite acceptable to stop reading the series after this book, as 3 and 4, written by Norton, do not match up to the quality of this book, and do not directly follow up on the events in which this book leaves you. Books in the series starting with 5 (Firehand) were not written by Norton. Although I have not yet read books 6 and 7 (by a different 'guest author' than 5, 'Firehand' is an abysmal excuse for fiction. Galactic Derelict will certainly keep your interest, and has all of the elements you'd have loved to see more of in expanded form in the rest of the series. Sadly, that never happens.

Published by Thriftbooks.com User , 14 years ago
Classic, I love her. This book is full of high adventure, interesting characters, and far away places.

Published by Thriftbooks.com User , 24 years ago
I have read most sci fi books available, especially Andre Norton books they were always full of action and were hard to put down....Too bad this one is out of print so soon......I still have the original 1979 version and will read it again sometime.....
Trustpilot
Copyright © 2022 Thriftbooks.com Terms of Use | Privacy Policy | Do Not Sell My Personal Information | Accessibility Statement
ThriftBooks® and the ThriftBooks® logo are registered trademarks of Thrift Books Global, LLC