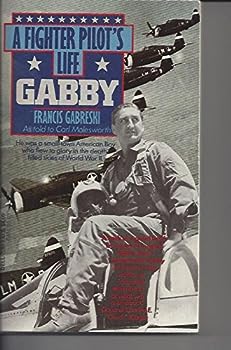 If ever a man has earned his place in the annals of military history, that man is Francis "Gabby" Gabreski. His exploits as a fighter pilot in World War II and Korea are legendary; his rise from humble beginnings to success in military and business careers is inspiring. This is the full story of Gabby Gabreski, told in his own words. Gabreski's life is a classic American success story. Born to Polish immigrant parents in 1919, he nearly washed out...

Published by Thriftbooks.com User , 15 years ago
I BOUGHT THIS BOOK FOR MY HUSBAND AND HE QUICKLY DEVOURED IT AND IMMEDIATELY SHARED IT WITH A FRIEND. THE BEST RECOMMENDATION POSSIBLE.

For many years Gabby was America's living "Ace-of-Aces"

Published by Thriftbooks.com User , 16 years ago
I read an abridged paperback version of this book many years ago and found it to be both stirring and informative. I particularly enjoyed reading about the more human side of being a fighter pilot. Gabreski, for example, became so excited in his first aerial combat that he didn't even see the German fighter that was in his gun sights even when his flight leader told him to shoot it down. He only saw it much later when they reviewed his gun camera footage. How human can you get? The smaller paperback excerpted the combat sequences from this autobiography and condensed them into a much smaller more action packed book obviously intended for a broader audience. After reading it, I was anxious to read the whole story; the larger, more comprehensive story of Gabby Gabreski's life. And this book did not disappoint. It tells the story of Gabreski's life from the time of his birth in Oil City, Pennsylvania, through his many actions in both World War II and in Korea, on through the post war years until his final retirement from Grumman Aircraft in 1987. America has a tendency to forget its heroes all too soon and sadly, except in certain circles, Gabby Gabreski is all but forgotten today. But with 28 aerial victories in World War II, making him America's living "ace-of-aces" for most of his life, and having added another 6 ? MiGs flying jets in Korea, he shouldn't be forgotten. So, if you want to read a good book about a great American and true hero, this is a good place to start.

Gabby is what we yearn for--a real American hero!

Published by Thriftbooks.com User , 24 years ago
If current events leave your head spinning...if you go to bed at night wondering where have all the heros gone and wake-up in the morning still searching, read "Gabby A Fighter Pilot's Life" by Francis Gabreski.In this age, when everybody has an excuse for every meaningless thing, it is humbling and skin dingling to unfold the tale of Gabby's life through each chapter. Gabreski, a man of simple elegance, scripts a tale of greatness throughout the book. This is greatness earned by actions. From humble beginnings, Gabreski travels the American dream through a never boring progression of character challenging and character building struggles. Gabby tells his story with the humility and directness only a real honest hero can possess. If you never want to be bored, always want to be inspired and feel good throughout, then this book is a "must read". Gabreski's story will leave you shaking your head, with a tear in your eye and a smile on your face. "Gabby" is a primer in character development. If it needs to be said, Gabreski makes the point that determination, faith, morals and hard work combine to pay a big dividend. Yet, he is subtle, entertaining and a real "class act". Thank you Gabby.
Trustpilot
Copyright © 2022 Thriftbooks.com Terms of Use | Privacy Policy | Do Not Sell My Personal Information | Cookie Preferences | Accessibility Statement
ThriftBooks® and the ThriftBooks® logo are registered trademarks of Thrift Books Global, LLC