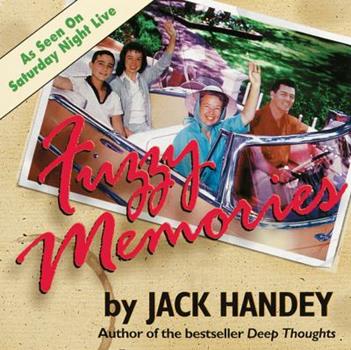 The author shares memories of his improbable past, from a parent-centered Thanksgiving, to playing hooky (and taking notes), to maintaining a termite farm.

We receive 31 copies every 6 months.

Published by Thriftbooks.com User , 17 years ago
If you're a fan of the Deep Thoughts series, this is surely a must have. Unlike the Deep Thoughts, you now have stories that are as funny as the short quips you've previously seen. I only wish the book were longer because you find yourself wanting to read more and more. My personal favorite is the fried chicken story with his cousin Susan the "Eubie". You truly get a sense of the warped genius that created Jack Handey. This book is enjoyable enough to read again and again whenever you start to feel down. If I could give it 10 stars I would.

The Best of Handey's Five Books

Published by Thriftbooks.com User , 20 years ago
This is by far the best of his books, with the original Deep Thoughts coming in second. In all of his other books, there are a few "thoughts" that leave you wondering why he thought they were funny, but literally every one in this book ranges from funny to rolling on the floor hilarious. But then, that's just my sense of humor.

Published by Thriftbooks.com User , 21 years ago
Jack Handey (his real name) is back with a pseudo-brilliant collection of delightfully funny semi-philosophical quotations.Whether you saw his words of infantile wisdom on NBC's series "Saturday Night Live" or had a list of his sidesplitting quotes sent to you by email from a colleague, you're in for a treat with this latest set._Fuzzy Memories_ features a themed collection of Handey's "deep thoughts" centered on family and growing up. From his remembrance of challenging a boyhood friend to eat a worm for a million dollars (having only paid him about $9800 as of last week), to going for a Sunday drive with his grandpa (who attempted to sell him into servitude to a European couple), each and every one made me laugh so hard my head started hurting!Although many of the quotes follow his traditional style, some longer deep thoughts in this book span a couple pages, getting funnier as they go on!This is a great book to keep out on a coffee table during a party. Inevitably, someone will open it up, read a few out loud, and engage everyone in laughter.Give us more, Jack!

Jack does it again.

Published by Thriftbooks.com User , 21 years ago
I'm relatively new to Handey's books but it's so easy to get hooked. This book seemed a great place to start. Fuzzy Memories takes a slightly different angle than the Deep Thoughts series but the same style of humour is there; the surreal and twist-in-the-tale are the order of the day. Some of them are short and straight to the point but others go on for three pages and in true Handey style, you never know quite where he's going with them. Whilst reading it, you're faced with a dilemma. Do I keep reading while I'm in a receptive frame of mind, which let me tell you, is an easy way to finish this book in a single sitting, or do I savour one or two and save some of the others for later? Though in the time it's taken you to think that you'll have laughed out loud at least six times.

Published by Thriftbooks.com User , 22 years ago
Jack Handey strikes gold again with Fuzzy Memories! In this book he tells stories from his childhood in that twisted manner we've seen in the Deep Thoughts series. I recommend it.
Copyright © 2022 Thriftbooks.com Terms of Use | Privacy Policy | Do Not Sell My Personal Information | Accessibility Statement
ThriftBooks® and the ThriftBooks® logo are registered trademarks of Thrift Books Global, LLC