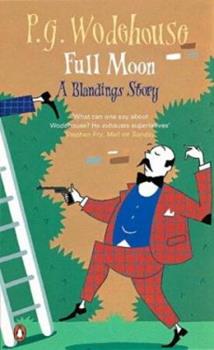 (Book #7 in the Blandings Castle Series)

Despite marriage to a millionaire's daughter and success as a vice-president of Donaldson's, Inc., manufacturers of the world-famous Donaldson's Dog-Joy, Freddie Threepwood, Lord Emsworth's younger... This description may be from another edition of this product.

Another Blandings Castle Read By P.G.Wodehouse

More Sweetness and Light from Wodehouse

Published by Thriftbooks.com User , 13 years ago
Full Moon is Wodehouse at his fullest. You know it right from the start, as "the refined moon...shone on turret and battlement" of Blandings Castle and all who dwell within. They're here in force, the inimitable Wodehouse gallery, Lady Hermione, "her outstandingly beautiful daughter...with the brains of a peahen," Vee, and her cantankerous father, Colonel Wedge. A little later, to our exquisite relief, comic and emotional, the impious but Hon. Galahad, Gally, Threepwood, brother to the Lord of the Manor, Clarence, makes his welcome appearance to spread sweetness and light and chaos in the cause of young love. Clarence's underappreciated son Freddie arrives from America with a stern commission to sell dog food, a task for which he is ably suited. There's bulky, bumbling Bill Lister, Blister to you, whose face sends newly minted millionaire Tipton Plimsoll, Freddie's American friend, into a miasma of terror every time he spots it, the face, that is, because he believes it is a spectral admonition to cease his, Tipton's, inebriate ways. By the way, Freddie's happily married while Tippy wants to be so with Vee, a result pleasing to all and yet well out of reach until the last few pages, and Blister wants to be so with lovely Prudence, a result pleasing to no one and yet well out of reach until the very last page. Gally saves several days with ingenious schemes involving prize pigs in bedrooms and bilious beards on Blisters, and all the plots untwist and, as Gally puts it, "Everybody happy, loving young hearts united, nothing to worry about." This Blanding novel stands out with brilliant, often hilarious turns of phrase peppering every page; Wodehouse's command of his beloved mother tongue was never so rife. The characterizations too are sharper than usual, especially the men's. This success is crucial since Freddie, Blister, and Tipton could easily have been rendered in one bland voice under a less miraculous pen. The same could be said of Col. Wedge, the Hon. Gally, and Lord Emsworth. Quibbles? Sure. Gally too often finds himself reminded of a old chum from his ancient past, and the girls, while fun and winsome as always, are not defined as well as the boys. We know from characters like the indomitable Sally that the master is master indeed of young women whose pluck and sass can win over the coldest heart. The reader always awaits a woman of that caliber, and none is quite forthcoming here. Still, a five-star book, since I interrupted my wife's reading with my laughter every time we sat down with our respective novels, only one of which was funny, though it was funny enough for both.

Published by Thriftbooks.com User , 14 years ago
This is one of my favourite Wodehouse books! Wodehouse is a wonderful tonic at any time; I always feel better after a trip to Blandings. Partly is it the wonderful Lord Emsworth's reverence for the Empress and the Zen-like peace and contentment he finds at her side. The pace of this story was zippy, the dialogue top drawer, and the characters particular and engaging as always. I'd like a t-shirt emblazoned with the slogan: "Read more Wodehouse!"

Veronica Wedge Snaps Up Her Millionaire!

Published by Thriftbooks.com User , 18 years ago
Full Moon is one of the better Blandings Castle episodes and is graced by a delightful set of illustrations by Paul Galdone that increase the fun. When there's a young American millionaire in the woods, the British nobility are apt to trot out their finest-looking, young unmarried women. In the latest generation, that's Veronica Wedge, daughter of Lady Hermione Wedge who is the sister to Clarence, ninth Earl of Emsworth. What Veronica offers in beauty, though, is more than lost in brainpower. So one needs a very shallow, very rich American for her. But unexpected difficulties arise because Freddie Threepwood, Clarence's not-too-bright son, is in charge of squiring Tipton Plimsoll, the American millionaire, around. Tipton has been on a toot. He's just come into his money and seems dedicated to drinking it up. But some red spots lead him to wonder if he's overdoing it. A trip to the doctor's office warns him that seeing spectres could be next. That observation becomes the basis of a running gag as Plimsoll comes to regard another young lover, Bill Lister, as a spectre whenever Plimsoll sees Lister. Frightened by Lister, Plimsoll decides to go to Blandings to take the cure for his alcoholism . . . and falls madly for Veronica Wedge. A new problem arises though when Plimsoll perceives that Veronica and Freddie are very friendly. Assuming the worst, Plimsoll stifles his feelings and wanders around depressed. There's a second romance that needs help. Bill Lister finds himself stood up at the registry office where his awaited his bridge to be, Prudence Garland. Prudence has been bundled off to Blandings Castle by her mother, Dora, also one of Clarence's sisters so that Hermione can keep the young suitor at bay. Prudence becomes annoyed that Bill won't give up on painting in order to run an inn near Oxford. And even if he gives up on painting, they still need 700 pounds to fix the old place up. Into the breach comes Galahad Threepwood who wants all the young lovers to be happy. In the process, he introduces Bill Lister into Blandings Castle on three occasions under false colors and helps overcome Plimsoll's wavering. Along the way, there's enough good fun and goofiness to amuse anyone.
Trustpilot
Copyright © 2022 Thriftbooks.com Terms of Use | Privacy Policy | Do Not Sell My Personal Information | Cookie Preferences | Accessibility Statement
ThriftBooks® and the ThriftBooks® logo are registered trademarks of Thrift Books Global, LLC