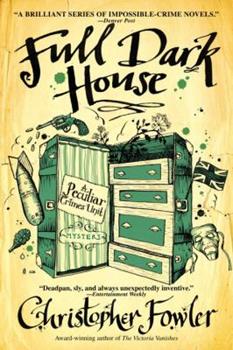 (Book #1 in the Bryant & May: Peculiar Crimes Unit Series)

Edgy, suspenseful, and darkly comic, here is the first novel in a riveting mystery series starring two cranky but brilliant old detectives whose lifelong friendship was forged solving crimes for the London Police Department's Peculiar Crimes Unit. In Full Dark House, Christopher Fowler tells the story of both their first and last case--and how along the way the unlikely pair of crime fighters changed the face of detection. A present-day bombing rips...

Published by SuzyQ , 8 months ago
This was my first Christopher Fowler book. I would describe the book as tedious and dragged out in too much detail about the theater & about the play. I felt like the movement of the mysteries to be solved constantly came to a complete standstill while the reader was plunged into endless detail. I found myself skimming over multiple paragraphs in an effort to get the storyline back on track. Detective fiction is my favorite genre & while the setting is definitely important to the story line, I think Fowler went overboard. I finished the book, but I was greatly tempted to skip to the end to see who did it. I always buy the 1st 2 books in a series to really acquaint myself with a new author but I'm not sure I'll be reading "The Water Room."

Full of dark twists and turns

Published by Thriftbooks.com User , 4 years ago
Lovers of a London history will savor Christopher Fowler’s Bryant and May series, this one delving into theater history and life in London during the Blitz. The pace is fast, the characters are charmingly and disarmingly eccentric, and you cannot put it down. I can’t wait to read the rest of the series of adventures whilst delving deep into Lonfon’s fascinating history.

Clever on the surface, yes, but deep as a well....

Published by Thriftbooks.com User , 15 years ago
This is a detective story of sorts, but don't read this book expecting the usual type of mystery story. Of course there are crimes to be solved, and an investigation to be carried out, with lots of plot twists and all the usual trappings of detective fiction. There is an ensemble of odd characters, eccentric heroes and twisted villains. There is also a very atmospheric evocation of life during the air raids on London during World War II. I thought that all of this was very well-done and interesting. But what really hooked me into this book was the obvious love the author (and his characters) have for the deep history and diverse people of London. Every bit of the book is alive with strange and fascinating London lore, and fortunately for the readers of this series, that is an inexaustable well of material that even the finest fiction can't match. This book is not for everyone, but if you like quirky fiction that operates according to its own laws, and takes you to places you might never find on your own,you may enjoy this book (and series) as much as I did.

Published by Thriftbooks.com User , 16 years ago
Wow! This was fun! The combination of the theater, Greek myth and the Blitz all at once makes for a cracking, good read. The several main characters are appealing - you root for their success against the forces of darkness...

Published by Thriftbooks.com User , 16 years ago
This is a 'frame' story, one that begins and ends in the present and works back into the past of many years ago, during the blitz in London. There are returns to the present throughout, but it is the past which dominates and fascinates as we get a sense of what it must have been like during that horrific time in London history. The author tells an absorbing tale while evoking for us the overlying fear and sense of helplessness, as well as the courage of Londoners. The darkness that prevailed, the smell of smoke and ash, the ruins of store fronts, the gaping holes in streets...this is the backdrop as John and Arthur pursue a shadowy killer through an old dark theatre. The workings of theatre life are also well done. Given what is going on in the world, our detectives pause to wonder if one lone murderer matters very much in a London full of death and destruction, but they must stop him, nevertheless. Lots of plot twists and turns, murders, flights into the bowels of the old theatre, as well as into the fog of a blackout, as our detectives attempt to unravel the secret of the mythological clues the killer leaves behind. I loved the history, the revelation of what it must have been to live in the daily horror of bomb blasts--and best of all I loved the company of those two lovable, eccentric, elderly detectives. From the moment Fowler puts the thought in May's head that Bryant resembled a young Alec Guiness, he nailed him for the rest of the series. I saw him first as Guiness was in 'Great Expectations' (as Herbert Pockets), then as he was much later in 'Scrooge', and even with a hint of 'The Lady Killers' scarf-draped criminal genius. That Guiness image will stay with me as I continue to read through this series. I've finished 'The Water Room' and now am into 'Seventy-Seven Clocks.' Maybe by the time I have finished this one, Fowler will have a new one out. I certainly hope so as I am so enjoying these two marvelous fun characters who have made me laugh out loud and shiver in suspense. Not your traditional police procedural novels, these stories seem more character driven, yet with plenty of mystery story.

Terrific read about murder and the theatre!

Published by Thriftbooks.com User , 17 years ago
I didn't expect to enjoy this book as much as I did, but when you take into account its ingredients-- London 1945, London present day, the Blitz, the theatre, murder, a murderer who seemingly can walk through walls, and two detectives in the Peculiar Crimes Unit-- you've got to keep on reading to see how the author manages to pull off all the plot elements and still keep the reader involved. And he does, beautifully. I am looking forward tho the next installment of Bryant and May, the two detectives.

Published by Thriftbooks.com User , 18 years ago
Detective Sergeant Janice Longbright learns from long time Detective John May that an explosion killed his peer Detective Arthur Bryant. John and Arthur first met when the Peculiar Crimes Unit was established in 1940 and they investigated a weird murder of a dancer at the Palace Theatre. That case with its odd occult like feel forms the start of a long time friendship and partnership.Now both octogenarians, it appears that Arthur was writing his memoirs when a six decades old bomb from the World War II Blitz exploded and killed him. John, who had talked to his buddy just prior to his death, finds a design of the Palace amongst the ruins of Bryant's residence. Was his partner killed because someone wants the sixty plus years old crime to remain cold or was this just an accident caused by the victim's own absent minded brilliant lifestyle? John believes murder has occurred and he plans to prove it.FULL DARK HOUSE is a terrific police procedural that uses an occult like homicide from 1940 as the motive for a modern day killing. The story line is driven by the octogenarian John and to a degree supplemented by his long time detective partner Arthur though the latter is dead and appears more as either flashback thoughts or the victim. The sleuthing is fabulous and the support cast realistically add depth to the hero, but when all is said and done this novel belongs to dedicated John, who somewhat obsessed in solving his pal's death hopefully is around for a decade or two solving more London murders.Harriet Klausner
Trustpilot
Copyright © 2022 Thriftbooks.com Terms of Use | Privacy Policy | Do Not Sell or Share My Personal Information | Accessibility Statement
ThriftBooks® and the ThriftBooks® logo are registered trademarks of Thrift Books Global, LLC