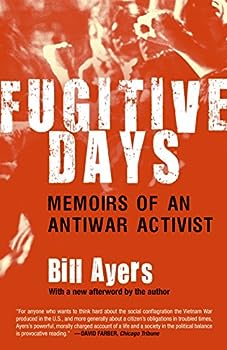 (Book #1 in the Bill Ayers Series)

Bill Ayers was born into privilege and is today a highly respected educator. In the late 1960s he was a young pacifist who helped to found one of the most radical political organizations in U.S.... This description may be from another edition of this product.

Published by Thriftbooks.com User , 13 years ago
I did not want the book to end....thought about stopping in the middle so that it could last longer. great read.

Published by Thriftbooks.com User , 13 years ago
I bought "Fugitive Days" for my 16-year-old nephew. Ayers' book is an inspirational account of a young person's struggles to do what's right during troubled times when the government and those in power have created an Orwellian world where the truth can be hard to discern. Given the similarities between the Vietnam War and the Iraq War, this is an important book for all to read today.

Published by Thriftbooks.com User , 13 years ago
Bill Ayres book is an insightful look back at a time when the political system in America was open to meaningful change. A lot of GOOD was done in those days-Medicare, Medicaid, ending racial segregation,increasing scholarships for poor kids-like me-to go to college, rising wages and stronger unions, good pensions for many and plenty of secure jobs. Bill Ayres actions did not kill or injure anyone, unlike those of war criminals like Richard Nixon, Robert McNamara, Mc George Bundy etc. He is a highly respected educator, an excellent choice for Secretary of Education in Mr. Obama's cabinet. Mr. Ayres is unapologetic about caring deeply about correcting the many flaws in our economic system as well as the evil of the "military industrial complex", as President Eisenhower pointed out in his farewell speech in january 1961. Like the famous author Thomas Paine of revolutionary war times, Bill Ayres is a true American hero and patriot.

Published by Thriftbooks.com User , 20 years ago
I had the pleasure of meeting Bill Ayers once, several years ago, during a breakfast in Chicago that I was privileged to have with former SDS National Secretary Michael Klonsky. Since, as Bill writes in his book, "Memory is a mother----er," he probably doesn't remember that meeting at all. But, I remember Bill's stated ambition at the time as wanting to be the "Rush Limbaugh of the left." It's a shame he didn't follow through on that, for I think he would have made an articulate radio commentator.Fortunately, we have this long overdue memoir. Bill Ayers writes with tremendous grace (he's a fine writer), and absolute candor. These two attributes should be sufficient recommendation for anyone interested in political radicalism in the 1960's. Ayers was in the thick of Students for a Democratic Society (SDS), quite possibly the most significant, mass movement of the left in the past three decades. Books on this subject alone are difficult to find (such as Kirkpatrick Sale's long out of print history).But, it is always refreshing to hear history as told by a participant. Bill Ayers, to his great credit, glosses over nothing that is significant. Equally worthwhile is the fact that although Bill's focus has changed to educational reform, he has not joined the legions of former leftists (e.g., Max Eastman, Jay Lovestone, Whitaker Chambers, Jerry Rubin, David Horowitz) who turned their back on their political leftism for conservative and neo-conservative politics.The interesting thing is that, with the exception of the FBI and those within the SDS orbit, Bill Ayers was somewhat of an unknown. The media focused on Mark Rudd, following the Columbia University rebellion, and Bernardine Dohrn, an activist and lawyer (who is now married to Ayers). Still, Bill Ayers was very much in the thick of things and uniquely suited to write this very stimulating and provocative memoir.Read this book for its merits, no matter your own political philosophy. You do not have to agree with Bill Ayers, nor do you need champion the Weather Underground and its activities. Indeed, there are but a few who will do so. What you do need to understand is what liberals, conservatives, and radicals all seem to agree on: The 1960's were turbulent, angry times when this nation appeared to be coming apart, and when revolution seemed a relevant concept. Bill Ayers brings these times to life in his compelling memoir. Much of his activity was wrong-headed, which he admits. Some of it had very tragic consequences. But the spirit of commitment, of pursuit of a just and equitable society, of working toward a brighter future, all of this is worthwhile and shines through in this book.

The views of a historian.

Published by Thriftbooks.com User , 20 years ago
Since its release, the arguments surrounding this book have been exhaustive. What none of these critics seems to be able to see is that this is a book of one man's life. This memoir, like all memoirs, outlines the major events of the author's life, and how those events led and transformed his life. Fortunately for us, Bill Ayers has chosen to share his experiences with us. Never in the course of the book does the author judge what he did, he merely explains why he thought such doings were a good idea at the time. To a historian such an account is invaluable. Here is a man who for much of his life lived outside of mainstream American society, fighting against what he perceived to be its inflexibility and racism. He gives a first-hand account of part of America's history that is being systematically forgotten. I would like to add that one does not need to believe that Bill Ayer's fight was just in order to find this account interesting and provocative. Furthermore, the author, realizing the most fundamental rule of historiography, even explains that his memories are subject to his own biases and interpretation, being inciteful enough to see that no one's memory, even his own, is precise. This is a book which, love it or hate it, everyone should read.
Trustpilot
Copyright © 2022 Thriftbooks.com Terms of Use | Privacy Policy | Do Not Sell My Personal Information | Accessibility Statement
ThriftBooks® and the ThriftBooks® logo are registered trademarks of Thrift Books Global, LLC