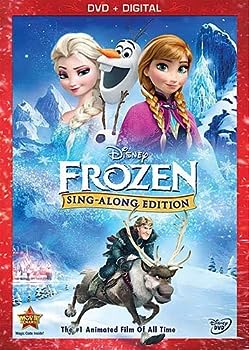 Fearless optimist Anna teams up with Kristoff in an epic journey, encountering Everest-like conditions, and a hilarious snowman named Olaf in a race to find Anna's sister Elsa, whose icy powers have... This description may be from another edition of this product.

No issues with order

Published by Johnsonis , 3 months ago
Just to put anyone considering this m movie at ease: I recently ordered it for my child and everything worked fine. Zero issues. Order away.

Published by Kathy , 6 months ago
I open it and it was missing the dvd.

Published by InMyOpinion , 8 months ago
I ordered the DVD/Blu-Ray combination. I received a case with space for both, but it only contained a Blu-Ray disc. Customer service sent a replacement that did contain both discs. Unfortunately, the DVD has a large scratch all the way around it and will not play once you get 15 minutes into the movie. Unacceptable. I won't be ordering any more movies from this seller.

Published by Diana , 9 months ago
Ordered Frozen Blu-Ray that was to have DVD and digital copy. What I received was a DVD version of Frozen and the other disc was a DVD of This Is Us the complete first season disc 4.

Published by disappointed , 9 months ago
five stars for the movie, but twice I was sent the wrong version of this movie. The customer service agent then told me it was my error and told me to try to reorder. No. I don't want a third copy of the wrong movie. I'll buy elsewhere

Published by Kat12 , 1 year ago
I think there needs to be a better description of what “good condition” means because when I order something that says it’s Blu-ray +DVD then I expect both to be included. We only got the blu-ray and, of course, I let my daughter watch movies on a DVD player when I exercise.

Published by Mary , 1 year ago
One thing blue ray was in there but not dvd was not pkg had one blue ray and in 2014 box mine was suppose to be both dvds I thought? Maybe I'm wrong thanks anyway it was still worth it any way

Frozen is a great movie

Published by Julia , 2 years ago
Frozen is a wonderful movie about self reflection and different kinds of love. While not the first Disney movie to explore these topics (among others that take part in the plot) the movie is till well worth watching again and again. Full of fun and adventure.
Trustpilot
Copyright © 2022 Thriftbooks.com Terms of Use | Privacy Policy | Do Not Sell or Share My Personal Information | Accessibility Statement
ThriftBooks® and the ThriftBooks® logo are registered trademarks of Thrift Books Global, LLC