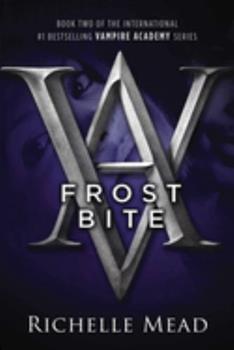 (Book #2 in the Vampire Academy Series)

Rose loves Dimitri, Dimitri might love Tasha, and Mason would die to be with Rose... It's winter break at St. Vladimir's, but Rose is feeling anything but festive. A massive Strigoi attack has put the school on high alert, and now the Academy's crawling with Guardians--including Rose's hard-hitting mother, Janine Hathaway. And if handto- hand combat with her mom wasn't bad enough, Rose's tutor Dimitri has his eye on someone else, her friend Mason's...

Published by Thriftbooks.com User , 14 years ago
Love this series and after the fallout from Breaking Dawn, I will anticipate the third book will be high on the best seller list. Easy, good read.

Published by Thriftbooks.com User , 14 years ago
Wow! This was a great follow-up to Vampire Academy (Book 1). Richelle Mead has a wonderful style of writing that keeps the pace moving quickly. It was hard for me to put this book down once I started reading. Once again, the plot and characters were unique and interesting. Mysteries kept unfolding and love triangles were building; there's always something intriguing going on to hold the reader's interest. Now I can't wait for the 3rd book of the series to come out!

Series keeps getting better and better

Published by Thriftbooks.com User , 14 years ago
Life is rough in high school--even for dhamphirs. Rose Hathaway is in her Senior year at St. Vladimir's. In six months, she'll be a full fledged guardian, protecting her lifelong best friend, Lissa, a Moroi Royal. Rose is on her way to take her Qualifier. She's going to be tested by one of the guardian greats, Arthur Schoenberg. Since he cannot leave the Moroi royal house he is guarding, Rose and her teacher, Dimitri, are coming to them. What they find instead is slaughter. All Moroi and Dhamphir members of the household are dead--apparently a plot by the Stigoi vampires and humans in conjunction. St. Vladimir's reacts with alarm. The school won't be allowing the students to leave on Christmas break. Instead, a ski resort will host all the students together and attendance is mandatory. Then--another Royal house is attacked and it becomes obvious the Stigoi are set to attack all the Moroi royalty and end the lines. While the Moroi are arguing defense, some of the factions are considering a more offensive approach--which, to this point, has been forbidden. Did I mention that Rose is having man trouble? She's in love with Dimitri, her teacher, but she can have Mason, a fellow guardian-in-training. And--since the guardians in training need even more defensive training, guess who's come to teach special classes? Janine Hathaway, Rose's mother, who'd given up raising her child for her career... What impresses me most about "Frostbite" is Rose's character growth in one short novel. You really read how events shape Rose's thought processes and can see how this young heroine is being shaped for her future in service to the Moroi. The intro to this book is one of the best I've ever read. In author parlance, it's a 'tell', but it's a great introduction to Rose's world and the three types of vampires inhabiting it. "Frostbite" is the second book in Richelle Mead's 'Vampire Academy' series. It's written for young adults, but I promise you adult readers are going to enjoy every minute of the story. I'm definitely looking forward to the next book.

There aren't enough stars for this novel!

Published by Thriftbooks.com User , 14 years ago
For the fourth time, Richelle Mead has shown just what a brilliant, talented writer she is. "Frostbite" is part 2 of an ongoing teen series that began with "Vampire Academy," and it is clearly the best so far. "Vampire Academy" introduced us to our narrator--Rose--and about a dozen other important characters; namely her best friend, Lissa, and her mentor and love, Dimitri. Mead's new vampiric world was slowly revealed throughout the course of the story, outlining the importance of the academy, as well as the roles of Moroi (like Lissa), dhampir (Rose and Dimitri), and Strigoi. In the simplest of explanations: Moroi are akin to royalty who must be protected; dhampir are the guardians of the Moroi; Strigoi are vampires gone bad (yes, you read that right). "Frostbite" is an astounding follow-up. The prologue has Rose re-introduce the basics of this developing series, as well as a couple key roles. It's a good refresher on the events of the previous novel, and brings long-awaiting readers back up to speed. This time, Rose's life becomes even more exciting. For starters, Strigoi are attacking in coherent, organized groups, slaughtering royalty and their guardians with frightening ease. Then, Rose's previously-absent mother appears--unwantingly for Rose--at the academy while the Moroi in the northwest gather to strategize defense. As if that weren't enough, her feelings for Dimitri, while returned, are constantly being rejected and turned down, as they have a duty to protect Lissa, and the risk of emotion cannot get in the way of that. But does it end there? Not for Rose. Her friend, Mason, begins to show interest in her just as an old friend of Dimitri's shows feelings for him, causing even more chaos in Rose's heart. And all the while, she's lacking the company she sorely misses from Lissa, AND she's unwittingly witnessing Lissa and her new boyfriend take their relationship to the next level! It sounds like a lot of drama, and it is. But Mead narrates to us flawlessly in the voice of Rose, who is clearly growing up, albeit struggling. Older teenage girls and even young adult females are likely to find themselves empathizing with our heroine. Mead's style is fresh and exciting, making it hard to put down the book even for a moment. Some of the action gets a little hot and heavy, but Rose is 17, something parents should keep in mind when considering this for younger girls. But for older teens, this series is exceedingly brilliant. Richelle Mead creates an exciting, brand new world of vampires with all the familiar modern notes of strong female leads, friendships, enemies, relationships, and drama. Interspersed is Rose's wit and sarcasm, often landing her in trouble with others, but keeping the spice of the story and holding the readers' mental palate. "Frostbite," put simply, has surpassed its predecessor. I wish I could give it more stars, and I simply cannot recommend this series enough. It will be agonizing to wait 'til nex
Trustpilot
Copyright © 2022 Thriftbooks.com Terms of Use | Privacy Policy | Do Not Sell or Share My Personal Information | Accessibility Statement
ThriftBooks® and the ThriftBooks® logo are registered trademarks of Thrift Books Global, LLC