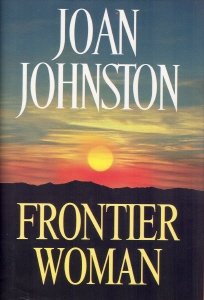 (Book #1 in the Sisters of the Lone Star Series)

Frontier woman pulled me right in to the story! Loved it.

Published by Dotty , 1 year ago
I couldn't wait to get back to reading each time I had to let it go for a while. I was pulled into the story right away. Although I wanted to tell at cricket at some points in her behavior,. I knew the time would come. Creed of course is the man in every woman's dream . Thanks. I just sent for comanche woman and texas women. To see what else happens. I am hooked!

Published by Thriftbooks.com User , 13 years ago
And I have to say that I am getting severely pissed off at the reviewers who are trashing this series and the way she's written the book. This is an AMAZING book and she's an AMAZING author. You people are reading way too much into the story. If it was suppose to be true to Texas then it would be Fiction not NON Fiction...DUH! and please remember it's just a story!

First In The 'Sisters Of The Lone Star' Series...Adventurous, Romantic, Historic

Published by Thriftbooks.com User , 16 years ago
This was the Joan Johnston novel that got me hooked on her style and stories. It's a Western Adventure/Romance with a woman as the heroine, and not since Calamity Jane have I seen such heroism in a woman depicted in this genre."Frontier Woman" is the first in the "Sisters of the Lone Star" series. Creighton "Cricket" Stewart,a free spirit, at 17 is the youngest of Rip Stewart's three daughters. Rip is a wealthy cotton plantation owner in Texas at the time it was still a young Republic. Rip taught his daughters all special skills of survival. In Cricket's case, thanks to her father, she was so self reliant that she thought she didn't need any man, ever! She could handle whatever came along, hostile Indians, Banditos, she even had wolves for pets. Enter Jarrett Creed, a handsome Texas Ranger on a secret government mission to expose traitors to Texas, during this time that the republic was under siege from both Mexican Armies, and Indians alike. Jarrett, who has lived with an Indian tribe is able to save Cricket from a fix she manages to get herself into with the Comanche. As Cricket and Creed travel together to uncover a conspiracy, that also unwittingly has Cricket's sister involved, they have a way of infuriating each other along the way. But... together they face danger, adventures, and unexpected romantic situations, which, by the way, get pretty steamy. Then, just when you think the story is over, Ms. Johnston gives us a sneak preview of "Comanche Woman" and "Texas Woman" (The stories of her sisters) leaving us wanting more.Just for a while I was swept to another time and place. Thanks Joan Johnston. Saddle up for some Western Adventure, some Romance, a bit of a History lesson and enjoy.....Laurie

Published by Thriftbooks.com User , 17 years ago
I thought this was a well written story. It is filled with lots of history and some frontier realities. It has the makings of a wonderful story with strained feelings of love, old enemies and betrayal. The main characters are Creed and Cricket but the story is also very full of Crickets two sisters, her father and Creeds brother Tom and his wife Amy. It's a book that, once started, is very hard to put down. I highly recommend this book. It's a keeper! I am looking forward to reading about the other two sisters in Commanche Woman and Texas Woman.

What an awesome series!!!

Published by Thriftbooks.com User , 18 years ago
This is book 1 in an awesome series about the Texas frontier. Word of warning, if you aren't into romances, this probably isn't for you. I love that the woman of this novel is strong willed and doesn't take any crap from men. Is good to see these aren't wimpering bimbos. When you have finish this book, be prepared to read the other two in the 'Woman' series.

Published by Thriftbooks.com User , 21 years ago
Take "Cricket" Stewart, the feisty, hard-headed, independent daughter of Rip Stewart, a Texas rancher and pair her with Jarrett Creed, a feisty, hard-headed, independent Texas Ranger and this book crackles with fireworks on almost every page! Initially I didn't think I was going to care for the rebellious Cricket as a romantic interest for the handsome Ranger because she seemed spoiled in a childlike way, talked rough and even turned into a once a month drunk to quell the pains her monthly cycle brought on. Somehow I didn't see how she'd ever turn into a woman that Creed would be interested in. But, as the story progressed and her interest in the Ranger increased, a gentle, less abrasive heroine begins to take form. Before long she's a perfect match in this tender yet still explosive romance with the dynamic Texas Ranger. I understand that this is the first in the BITTERCREEK series that will include Crickets sisters Sloan and Bay. FRONTIER WOMAN gives enough information about both these women in the storyline to give strong clues that these two women are also going to make for interesting reading. I'm looking forward to their stories as well.
Trustpilot
Copyright © 2022 Thriftbooks.com Terms of Use | Privacy Policy | Do Not Sell or Share My Personal Information | Accessibility Statement
ThriftBooks® and the ThriftBooks® logo are registered trademarks of Thrift Books Global, LLC