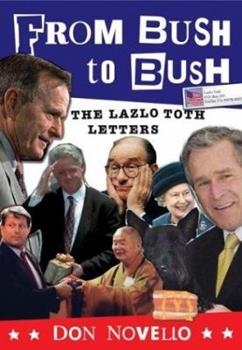 From Bush to Bush: The Lazlo Toth Letters

A humorous examination of the periods during and between the Bush presidencies, presented through a series of crank letters and their responses, features the author's offer to be a Poet Laureate for... This description may be from another edition of this product.

Published by Thriftbooks.com User , 15 years ago
I love humor and this book had me in stitches. "Lazlo Toth" is a riot. Do yourself a favor and have this sitting around the house for when you want a laugh.

My Kind of Crazy

Published by Thriftbooks.com User , 16 years ago
As a fan of Don Novello's earlier works, I was concerned that perhaps, this book wasn't going to be as funny as the older books. But, I'm happy to report that Don Novello is as "bent" as he ever was! Over the years, these books have inspired me to write a few memorable letters of my own and I think I might start writing them again. These books are best when read aloud and shared with friends. You'll laugh til you cry!

Give the gift of laughter by giving someone this book!

Published by Thriftbooks.com User , 18 years ago
I had the pleasure of meeting Don Novello at a book signing. He is such a sincere and intelligent person-- one of America's best wits. Sadly, he said that this is his last "Lazlo Toth" book. I almost described this book here as being "remorselessly" funny. But that would be incorrect. Don Novello's humor lacks any nuance of cruelty-- his is a quirky, kind humor. Biting, yes! But humane. An abbreviated example: England's Queen Mother, he notes in one letter, may be burdened by titles supreme and inconsequential-- but probably will never be bestowed the title of "designated driver".

Published by Thriftbooks.com User , 18 years ago
Don Novello a.k.a. Lazlo Toth has done it again.As hilarious and insigtful a read as I've had this century.The letters are as great as ever and the responses show these guys for what they are.While reading I had to put it down more than a few times because I can't laugh that hard and read at the same time.My only question...Don...what took you so long?Get this book!!!

Published by Thriftbooks.com User , 18 years ago
This is a wonderful book because it defines, just like the two previous ones, the true character of America (and Americans). It's subtle, funny, and meaningful. Buy it.
Trustpilot
Copyright © 2022 Thriftbooks.com Terms of Use | Privacy Policy | Do Not Sell or Share My Personal Information | Accessibility Statement
ThriftBooks® and the ThriftBooks® logo are registered trademarks of Thrift Books Global, LLC