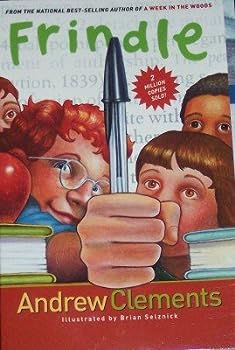 From bestselling and award-winning author Andrew Clements, a quirky, imaginative tale about creative thought and the power of words that will have readers inventing their own words. Is Nick Allen a... This description may be from another edition of this product.

Read This in Fifth Grade and I still Remember It

Published by D , 2 years ago
I’m 30 now, but when I was in fifth grade my teacher gave me this book to read specifically. I won’t give away the plot but the lesson the book has an important one and all children should learn it. It has stayed with me and it’s still one of my favorite children’s books and should I ever have kids this will definitely be in their library.

Great read for the 9+ age child

Published by Shirla , 3 years ago
I purchased this book as a summer read for my 9 year old grand daughter. I read the whole book before I gave it to her I found it very interesting cleverly written the life lessons keep the attention of the reader surprising results and the ending was super unexpected very good book!

My Grandson did not receive this book!!😞

Published by Thriftbooks.com User , 3 years ago
We can’t comment, he didn’t receive this book. Three stars because I’m sure he would of enjoyed the book. I ordered three kid books for him and only one came, he received two adult books that were not in the order??? I think he got someone else’s order!!

Published by Thriftbooks.com User , 19 years ago
FrindleFrindle, the realistic story by Andrew Clements, is about a boy called Nick, who is very intelligent and creative. He is very kind and likes to think of new ideas and do his own things. He is not particularly bad, but somehow he seems to get himself into lots of trouble. The story is set in New Hampshire in America. It is written in modern times. The title of the book is Frindle and this is the new word Nick has created for a pen. Nick called a pen a frindle because he questioned why a pen was called a pen. Nick has just started fifth grade and his language arts teacher is Ms Granger. Everybody hates her because she is mean and makes all the children look up their mistakes in the dictionary. Ms Granger loves her dictionary and she tries to make the children use it a lot.One day after school, Nick was walking home with his friend Janet Fisk. Janet saw a pen lying on the ground, she picked it up and it slipped out of her hand again. Nick picked it up and handed it to her and for some strange reason, he said, "Here is your Frindle." As he said this, he had a great idea; he said, "Hey, instead of the word pen, why don't we call it a frindle." The next day Nick was telling everyone about his new word, frindle. Ms Granger got irritated with Nick and told him to stop using the nonsense word. A week later the principal requested to see Nick's parents about Nick and his new word frindle. The principal asked Nick's parents to tell Nick to stop using his made up word. Unbelievably other strange things happen, with the use of the new word. If you want to hear about the rest of this story read this fabulous and great book Frindle.I recommend this book, because the characters are believable and funny. It is not like any normal school classroom. Once you start reading the book, you won't want to put it down. The pages will be turned quickly. Nick is half cool and a bit geeky, but you can't help but like him.

Published by Thriftbooks.com User , 22 years ago
I liked the book Frindle alot! It is a story about a boy named Nick Allen. He is in the 5th grade. Nobody can tell if he is a trouble maker or not . He wanted to make a new word, and also once he turned his classroom into a tropical island. Do you think he is a trouble maker? Do you think he made a new word? Read this book to find out. You will love it!

Published by Thriftbooks.com User , 22 years ago
Absolutely Wonderful! This book is engaging for all ages and a must read for every middle-grade class. A heart warming and funny story -- a parent's dream come true. It is about a student named Nick Allen, who decides to create a new word. His Language Arts teacher, Mrs. Granger has a real passion for the english vocabulary and the uses of a dictionary. But after Nick's insistence, his friends and schoolmates begin using his word ... frindle. Much to his teacher's dismay, it becomes so popular that everyone is using it. Many escapades ensue (after-school punishments, principal visits, local and national publicity, local entrepreneurial opportunities and finally, true acceptance of the word and inclusion in the dictionary. In the end, both student and teacher form a strong appreciation for one another and a bond that cannot be broken.

Frindle Mentions in Our Blog