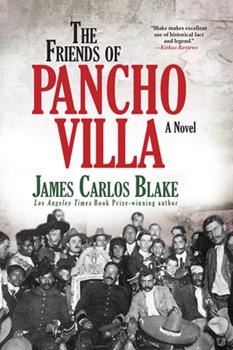 The Friends of Pancho Villa

With his debut novel on legendary Texas outlaw John Wesley Hardin, The Pistoleer , James Carlos Blake demonstrated a rare talent for western and historical fiction. His second book, The Friends of Pancho Villa, now back in print, further proved his mastery in the genre, taking on an even mightier figure of North American legend--the most memorable leader of the Mexican Revolution. Violently waged from 1910 to 1920, the revolution profoundly transformed...

Published by Thriftbooks.com User , 20 years ago
I've never read a James Carlos Blake novel before. I bought this, hesitantly, off a remainder shelf... Frankly, I'm amazed it was there. This is a tremendous book, replete with wonderful characters, an interesting plot, and wonderful atmosphere. The author has recreated the time of the Mexican revolution wonderfully, and the main character, and narrator, is someone you'd like to sit and have a conversation with...though not in a dark alley.Rudy Fierro is there, throughout the whole of the Mexican revolution, and Pancho Villa's fight with the various people in power in Mexico City. The various people involved are tremendously depicted, and there's a parade of minor characters, some historical, some not. Both Ambrose Bierce and George Patton, not to mention John Pershing, make appearances. The author does a marvelous job of portraying men for whom it is nothing to shoot several hundred people, and then go have dinner.Frankly, I was surprised by how good this book was. I found another one on the same remainder shelf, and after that I'll be hitting the used bookstore.

The first, but not the last!

Published by Thriftbooks.com User , 22 years ago
This is the first book by James Carlos Blake that I have read, but it certainly won't be the last. How have I missed this author until now? I simply couldn't put this book down. This is an unflinching and uncompromising look at the Mexican revolution and at the men who fought in it, told from the viewpoint of one of Pancho Villa's 'Generals'. It is an absolutely driving narrative that never lets up from beginning to end. It is told in a surprisingly modern tone and language, yet still seems authentic in every nuance. Early on, the first person narrator remarks that the difference between a revolutionary and a murdering bandit is the difference between war and peace...and therefore how necessary it is to have the war. There are no real heroes here, treachery is a daily occurence, prisoners are murdered as a matter of course, villages and their civilian populations are destroyed without mercy. "As we pulled out of Zacatecas, the air was thick with the odors of smoltering ash, bloody dust, putrefying flesh. The rich ripe smells of triumph." This book is not for the squeamish; there is murder, cruelty and mayhem on virtually every page. But there is incredible bravery here, too. And victory in the face of overwhelming odds and hardship. After literally shooting an old-friend-turned-traitor to pieces, the General says, "Like Villa, I believed that even though some men did not deserve to go on living, they still deserved to be remembered at their best." That seems an apt epitaph for all of The Friends of Pancho Villa.

Published by Thriftbooks.com User , 22 years ago
Blake does it again! After reading "The Pistoleer," one of the finest biographies-turned-adventures ever written, I picked up "Friends of Pancho Villa." Another extraordinary effort by James Carlos Blake. Blake paints great landscapes, and you can feel the both the heat of battle and the coldness of the Mexican mountains in his writing. A great adventure that tracks the life of one of history's great outlaw-heros.

Published by Thriftbooks.com User , 23 years ago
I THANK THE AUHOR,JAMES CARLOS BLAKE FOR MAKING THIS BOOK OF PANCHO VILLA SO ACCURATE MOST OF THE INFORMATION U SEE ABOUT HIM IN A HISTORY BOOK OR A ENCYCLOPEDIA TELLS OF HIM OF A KILLER WITHOUT A CAUSE AND PUT HIM DOWN IN SO MANY WAYS AND GIVE UNACCURATE INFORMATION OF WHAT THE REVOLUTION WAS ABOUT.YES THE AUTHOR DID PUT A LITTLE FICTION IN THE BOOK PROBABLY TO MAKE THE AMERICANS HAPPY.BUT NEVER THE LESS THE BOOK IS 90 PERCENT FACT I HAVE RESEARCH ALOT OF BOOKS OF PANCHO VILLA AND EVEN FIERRO. I JUST NEED A FEW MORE COURSES TO BECOME A HISTORY TEACHER IN A MIDDLE SCHOOL. WHEN I DO I WILL INTRODUCE THIS BOOK INTO THE CLASS. U DID A EXCELLENT JOB SIR.I HOPE U WRITE ANOTHER BOOK ABOUT OF OTHER PEOPLE THAT HISTORY BOOKS IN SCHOOLS TELL ANOTHER STORY ABOUT THEM BECAUSE THE GOVERMENT OF THE COUNTRIES OF THOSE PEOPLE PUT DOWN CAUSE THEY FOUGHT AGAINST THEM FOR A BETTER PLACE TO LIVE.

Published by Thriftbooks.com User , 23 years ago
"The Friends of Pancho Villa" is just plain fantastic. Not since Michael and Jeff Shaara's "The Killer Angels" trilogy have I read a book that brought history to life, and provided such pure reading enjoyment at the same time. Blake's novel about John Wesley Hardin, "The Pistoleer" has that same quality; books that you want to keep by your bedside and read multiple times.
Trustpilot
Copyright © 2022 Thriftbooks.com Terms of Use | Privacy Policy | Do Not Sell or Share My Personal Information | Accessibility Statement
ThriftBooks® and the ThriftBooks® logo are registered trademarks of Thrift Books Global, LLC