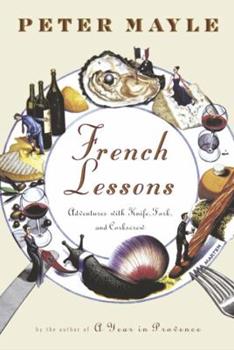 From Peter Mayle, a joyous exploration and celebration of the infinite gastronomic pleasures of France. Ranging far from his adopted Provence, Mayle now travels to every corner of the country, armed with knife, fork, and corkscrew. He takes us to tiny, out-of-the-way restaurants, starred Michelin wonders, local village markets, annual festivals, and blessed vineyards. We visit the Foire aux Escargots at Martigny-les-Bains a whole weekend devoted to...

Published by Thriftbooks.com User , 14 years ago
Peter Mayle is probably best known for his two travelogues set in Provence - "A Year in Provence" and "Toujours Provence". While "Bon Appétit" is also set in France, it isn't restricted to Provence - it follows Peter's (fairly random) travels throughout the country - basically going wherever his belly leads him. While British chefs are probably known better for the swearing than their food, their French counterparts are widely viewed as artists. Having spent his early years in post-war England, Peter had come to view food solely as fuel - and certainly not as something you could seriously enjoy. It was a business trip to France, guarding the managerial briefcase, that opened his eyes - a trip that is recalled in the book's opening chapter. His boss, Mr Jenkins, proves to be the stereotypical Englishman - he doesn't have a good word to say about the French, makes no attempt to speak "their lingo" and advises young Peter that, should any further explanations be required, shouting is the best course of action. While there are some who relate very well to Mr Jenkins, Peter isn't one of them : he credits that trip with the loss of his gastronomic virginity, and - if this book in anything to go by - it became the launchpad to a love affair with French cooking. Peter travels the length and breadth of the country, but doesn't restrict himself to the cafes and restaurants. By the looks of it, there must be any number of food-related festivals. There's a trip to Richerenches for the `Messe des Truffes' - which goes to show you, I guess, just how religious some people are about what they eat. Interestingly, Richerenches started life as a fort built by the Knights Templar. (Doubtless, truffles have something to do with the Holy Grail, the Sacred Feminine and Leonardo da Vinci's entire back catalogue - however, Peter thankfully sticks to the food and avoids the conspiracy theories). He caters for the famous French foods - he attends a Festival of Frogs Legs in Vittel, while he discovers the art of eating snails at a festival in Martigny-les-Bains. Here, he meets the enticing Mlle Coquille, and his education includes a talk on the dangers posed by Chinese counterfeiters. (They're even - oh the horrors - apparently making foie gras). He also attends a cheese fair in Livarot, home to one of the most (reputedly) pungent cheeses in the world. The festivities include the induction of several Chevaliers de Fromage and a cheese eating competition. Two of the country's most famous wine regions are also visited. The Bordeaux region must be home to the world's most enjoyable marathon. The Marathon du Medoc, run through Bordeaux 's famous vineyards, had nineteen thousand applicants the year Peter visited, of which eight thousand were selected to run. Six thousand of these runners arrived in fancy dress - with France's national champion among the remaining two thousand. (He possibly felt it was worth taking seriously, since the winner apparently gets his weight in win

Published by Thriftbooks.com User , 17 years ago
In his typical style, Mayle has presented us with a charming, if a bit overly precious, set of anecdotes about his travels to various culinary festivals throughout France. People who have traveled France extensively may find Mayle's writing (in this book and in his Provence-based books) somewhat pedantic, but for anyone who has felt the same enchantment of his over a simple crepe or omelette, oyster or cheese, this book is perfect. I've enjoyed Mayle's writings in the past and I'm a bit of a "foodie" and a francophile, so this book worked well for me as a vacation read.

Published by Thriftbooks.com User , 20 years ago
Last year I was lucky enough to take a month long holiday in the south of France. Naturally, "French Lessons" is one of the books I chose to take with me."French Lessons" is vintage Peter Mayle. While I enjoy Mayle's fiction as a light and fun change of pace, I really think he is at the top of his form when writing non-fiction. "French Lessons," like the classic, "A Year in Provence," is simply charming. There is just no other way to describe it. The book charms and beguiles you; you lose yourself in it and time just flies. No one seems better able to describe the "real" France than Peter Mayle. And it shows. Most definitely.Just as with Mayle's previous non-fiction books, I found I could relate to just about everything he wrote in "French Lessons." I had had similar experiences in Provence, in Paris, in the Loire, in Burgundy. One can learn about more than food in this book; Mayle also details the social customs of the areas and the idiosyncrasies of the people. I learned there are people who attend Mass to give thanks for the truffle, a festival where snails are eaten by the dozen and washed down with Gewurztraminer, and an actual "cheese hall of fame" in the town of Livarot. The person honored with the award from this particular hall of fame is expected to eat as much livarot cheese as possible. In another such festival, frogs' legs are the celebrated foodstuff. The annual celebration of the bleu footed poulet in Bourg-en-Bresse and the Marathon du Medoc made for especially hilarious reading.Mayle takes us from region to region and from town to town...all in the name of great food. We visit festivals, restaurants, chateaux and so many town squares, I lost count. Mayle's descriptions of the festivals and his historical notes are particularly interesting, especially to anyone who is planning to visit France. After reading this book, he or she will surely come away knowing what is, and what isn't, authentic French food.Throughout this book, Mayle writes in his characteristically charming, witty and urbane manner. His is a style that suits the subject matter of this book perfectly.I do think that those readers who have actually traveled to the south of France at least once, will find more to love in this book than those readers who are unfamiliar with the area. But familiar or not, Mayle and this book will certainly charm. "French Lessons" is a witty, and sometimes hilarious book that is guaranteed to ensure an enjoyable afternoon in the sun.

Published by Thriftbooks.com User , 21 years ago
I have read and enjoyed most of Mr. Mayle's books on Provence and was eager to read this one, especially since I was traveling to Provence the following week. Yes, at times the stories (a different event per chapter) may seem a bit "too cute", but in my limited experience from two trips to France, he is right on the money. The French have such a passion for food that it spills over into all parts of their lives. Food (and of course drink) is always a celebration - whether it's a simple lunch at a roadside cafe or a 5-course meal.The final chapter is about the Guide Michelin and his visit to the restaurant at the Hotel D'Europe in Arles - which has been rated for more than a hundred years now. Days after reading this chapter, my wife and I were dining there. One of the best meals of our lives. Read the book, laugh, shake your head and then plan a trip to France!

Mayle Eats His Way Across France

Published by Thriftbooks.com User , 21 years ago
It's an assignment that would make even the most jaded writer pick up his pen: Travel around France and report back about the oddest, most unusual ways that it celebrates its cuisine. Frog legs, snails, truffles, poultry, and, of course, its wine. Sheer heaven!Peter Mayle accepted the challenge and here's the perfect book for curling up on the porch alongside a glass of cool refreshment. "French Lessons" charts a year in Mayle's life as he travels across France, describing with a combination of droll wit and wine-soaked facts (many times, he couldn't read his notes the day after some festival) how a country blessed with not only a variety of climates and cuisines, but also a people willing to spend large amounts of money on their enjoyment thereof.I am a longtime fan of Mayle's writing, back when he was writing about pastis and other subjects for "European Travel & Life" magazine, but I hope not an uncritical one. I was disappointed in his account of his return to France in "Encore Provence," and "Hotel Pastis" did not engage me at all. Sometimes, I wonder if, with skills learned in the advertising trade, where he was an executive, he doesn't succeed in giving the French a gloss it doesn't otherwise deserve. Certainly, when discussing chickens from Bresse, the only poultry to have its own label (called appellation contrôlée), he touches only in passing, how most chickens we eat are raised (if we may call it that) in horrible conditions. Not for nothing is it called factory farming.But "French Lessons" went down like a lightly garlic-flavored escargot. This is a book which celebrates eating and drinking well, and is a balm to the soul as well as incentive for the appetite. Needless to say, it should only be taken in short dollops, after a good meal.Not everything has to do with cooking. There's the Le Club 55, a restaurant in Saint-Tropez where the Beautiful and mostly undressed people meet to eat and be seen, where an expert on plastic surgery was able to tell which surgeon worked on which lift ("Cosmetic surgery has its Diors and Chanels, and when looking at a suspiciously taut and chiseled jawline or an artfully hoisted bust, the informed eye can identify who did what.")Then there's the Marathon du Médoc, where, amid the serious runners, jog several thousand more in fancy dress amid the châteux of Bordeaux, where wine is offered at the refreshment stations, and the winner earns his weight in wine. Rounding out the book is celebration of frog's legs on the last Sunday in April in Vittel, where 30,000 people will eat five tons of the stuff. If you want to know what they taste like, Peter will inform you down to the last bite of the marrow.And if you wish to attend these fetes, addresses and other notes are listed at the back of the book."French Lessons" represents a return to form for Mayle. So long as he is willing to go out and hunt up new stories to tell, he'll remain an entertaining and informative writer.
Trustpilot
Copyright © 2022 Thriftbooks.com Terms of Use | Privacy Policy | Do Not Sell My Personal Information | Cookie Preferences | Accessibility Statement
ThriftBooks® and the ThriftBooks® logo are registered trademarks of Thrift Books Global, LLC