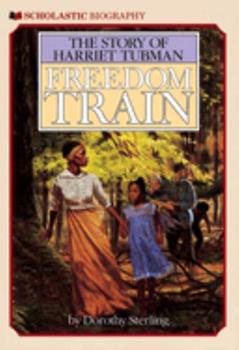 Born into slavery, young Harriet Tubman knew only hard work and hunger. Escape seemed impossible - certainly dangerous. Yet Harriet did escape North, by the secret route called the Underground Railroad. Harriet didn't forget her people. Again and again she risked her life to lead them on the same secret, dangerous journey.

Important and inspirational tale of a young woman who defied slavery

Published by Thriftbooks.com User , 15 years ago
Harriet Tubman has to rate as one of the most amazing heroines in history. A slave born in America in about 1820, (I say about as she never really new her birth date). She was always fired with a stronger will than her 'master' and 'mistress' liked. As a very young girl she was taken to the big house but she never got on with the mistress. She ended up whipped and sent back to be a field hand. She was short, but she worked so hard she soon was capable of doing a mans work. However she never wished to bow her head to any one. When she was quite young she helped another slave escape and in the process was badly injured. Despite leaving her with sudden sleeping spells she escaped and went on to join the freedom train. Her inspirational way, strength and sheer will made her extremely successful at freeing many others - even when they eventually had to take the 'train' all the way to Canada. She even helped her elderly parents escape. This is as much a story of slavery in America as this outlines the background of what Harriet was doing. Why she suddenly had to take her 'passengers' beyond the Delaware border to Canada. The wrangling of the slave-owning congress who wanted all slaves returned, that Lincoln refused to allow black troops in the civil war at first - and paid them only 2/3rds of what the white troops were earning. It also talks about Harriet's life after the end of the civl war and her support of her family, friends and freedmen institutions to better her community. This is a very well written, informative and entertaining book suitable for 8-12 year olds and I would highly recommend it. It is inpirational - about a girl who would not give up hope and when she could acted on it. I really liked the fact that this story is about someone who actually made change. This is not a glamouress herione, but one who really changed the face of America.

Published by Thriftbooks.com User , 19 years ago
In the beginning of the book Harriet Tubman was planning how to escape from slavery. She worked on a plantation in the south like so many other slaves. Harriet Tubman escaped with another slave and they got caught a white man hit Harriet in the head with a heavy object which caused her to have a concusion. When she got better she tried it again and made it to the north, were she got a job. She went back and got her family and friends. Harriet started making friends on the way that would help her and other slaves escape to the north, so Harriet started going back to the south and freeing slaves. She freed more then 300 slaves over the year. Also Harriet fought in the army, became a nurse in an Negro hospital and trained other women to be nurses and founded the African Methodist Episcopal Zion Church. She was a very tall black women that could not read or write. But she did so much for the slaves and to help free them.

Published by Thriftbooks.com User , 22 years ago
A wonderful book. When I say masterpiece, I mean masterpiece. A brillent true story of a brave young woman who lives in the hearts of children as a role model. When I read the book I felt like I was really there. It is very realistic. Harriet Tubman is an exellent book. Read it!

Published by Thriftbooks.com User , 22 years ago
Freedom Train was one of the most magnificent books to read about. It's about a slave who escaped from slavery and now is going back to save other slaves.

Published by Thriftbooks.com User , 22 years ago
This book was very informative, about the life of Harriet Tubman. What a wonderful, caring woman she was. She was truly a modern day Moses. She loved her people so much and helped them as much as she could. I would like to thank the author, for writing such a wonderful biography of Harriet Tubman. Thank you, Nick Sicignano 7th grade
Copyright © 2020 Thriftbooks.com Terms of Use | Privacy Policy | Do Not Sell My Personal Information | Accessibility Statement
ThriftBooks® and the ThriftBooks® logo are registered trademarks of Thrift Books Global, LLC